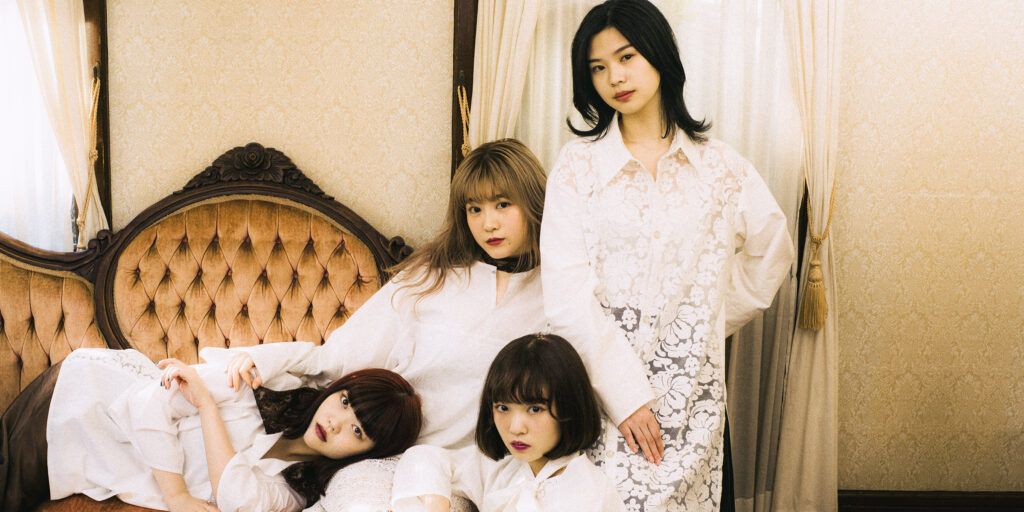 In this feature, Otaquest aims to help introduce some of Japan’s best musicians to the world. Today, a young rock band out of Osaka responsible for some of the catchiest anime-related numbers in recent times. They offer a reminder that there will always be young people somewhere picking up guitars and charging ahead.

GIRLFRIEND is a young group offering a lot of excitement for the future. The Osaka quartet — consisting of vocalist/guitarist Sakika, guitarist Nagisa, bass player Mina and drummer Mirei — plays rollicking rock music, carrying on a legacy of rock bands out of the Kansai region. They’ve gained a lot of attention in a short amount of time, including landing opening and ending themes for prominent anime series. The four-piece outfit is one of the youngest groups in the country, and have a bright future ahead of them, but they’ve already managed a lot.

Ahead of their performance at OTAQUEST CONNECT on Aug. 16, here’s an overview of GIRLFRIEND, from their Osaka roots to landing spots in front of big-name anime series.

The band came together at Osaka’s Caless Vocal & Dance School, a hotbed for talent. Alongside future members of E-Girls and ONE OK ROCK, this school also helped produce SCANDAL, another Kansai-area rock band playing up-tempo numbers that went on to nationwide attention (and work with anime series). GIRLFRIEND feels like the next generation of SCANDAL-indebted rock emerging from the city, helping to carry on the energy of rock to the next set of new ears. That was clear from their first single, “360,” above.

As they continued developing as a group, they started covering other Japanese artists’ songs and sharing them on YouTube. They tackled popular numbers by AAA, Keyakizaka46 and Perfume (above) among others. These helped them gain attention online, turning them from fledging Kansai band to a viral outfit that could pull in over a million views with their take on a popular song. For some, they might be better known for their rock takes on big name J-pop numbers. Yet for many others, this wouldn’t be the case.

Know When To Strike

While covers got them attention, it would be up to their originals to push them up a level. Luckily for them, they had a big platform early on, when they were able to write the ending theme for the TV Tokyo anime series Twin Star Exorcists. That number, “Hide & Seek,” was a jaunty number highlighting all of their best attributes. Those carried over to the group’s first full-length album, CHOCOLATE, which shined when they embraced a faster speed.

This uptempo approach to rock — coupled with a all-together-now choruses — bloomed on their biggest breakthrough to date, “sky & blue.” That one ended up as the opening theme for well-known anime series “Black Clover,” and introduced their zippy style to an even larger audience.

GIRLFRIEND’s energy carried over to this year’s “HOUSE,” a sophomore album merging the band’s bread and butter style with experiments into slower numbers and slightly more experimental offerings. It’s their best release yet, showcasing what makes them stand out while offering providing glimpses of where they could go next. Listen to it below.

A great example of GIRLFRIEND’s crowd pleasing qualities wrapped up in an early number.

This highlight from GIRLFRIEND’s debut album showcases how well they work with uptempo rock.

While GIRLFRIEND shine when dashing ahead, they can also work at a slightly more relaxed tempo. Here’s one of the better examples of the quartet’s versatility.

Their big anime opening is also one of their catchiest creations.

A nervy number from the band, hinting at more jagged approaches they can take in the future.

GIRLFRIEND Go for a Slow Burn On “Sore Dake”