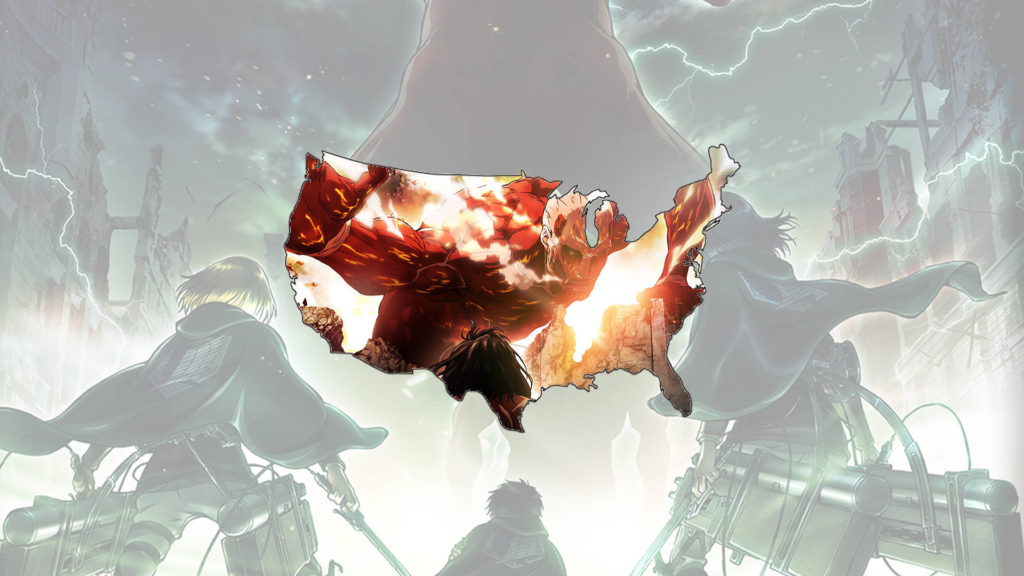 Taking a glance back, I can say with confidence that the anime industry has come a long way since it’s initial Western popularization in the early 90’s. Gone are the days of VHS collecting and irregular release schedules, replaced instead by the highly efficient streaming structure that we have now adopted. In almost realtime, we as fans are able to log online and watch our favorite anime just moments after Japanese release, something that could have only been dreamed about some 15 years ago.

For the second installation into our investigation.// series, we’ll be looking at the current state of anime in North America as of the Spring season. Prompted by the recent infographics shared by Crunchyroll, we’re able to see just what fans are enjoying on a state by state basis. Furthermore, we’ll be investigating just what this could mean for the industry as it continues to press forward as a global entertainment mainstay.

If you haven’t yet had a chance to check out the infographics recently released by the team at Crunchyroll, they were designed to outline just what series each area in the US have been enjoying the most from the current season. Split into two infographics, the images give us a deeper insight into just how the medium is currently being consumed in the US. The first visual breaks down a state by state outline of what shows are performing the best this season, and well, the results are pretty much what you’d expect them to be:

It comes as no surprise that the mammoth second season of Attack on Titan would be the most streamed anime, followed only by Boruto and My Hero Academia. Both in Japan and internationally, Attack on Titan has been an absolute wrecking force, building upwards from the momentous hype created by it’s first season. Boruto on the other hand finds itself as a familiar face in a new territory, working off the success of it’s predecessor Naruto without actually sharing it’s name. Looking at this map however, there’s one fatal issue — everything is a sequel of a pre-existing anime. This is where the second visual swoops in to save the day, offering us an insight as to what new anime have been performing best in each state.

Now this is a little better. If you’re anything like me, you probably like to see a little diversity in your anime rankings. While I knew series like Attack on Titan will be taking first place, I’m more interested in the new series that have been taking North America by storm. Coming in at a total of seventeen states, Akashic Records has managed to strike through as this seasons most watched, non-sequel anime. This is where I was a little surprised however, seeing Granblue Fantasy hit such a high note amongst international audiences. The mobile game gone anime has been the topic of much discussion amongst myself and many others here in Japan, so I was excited to see it place on the map.

So what does this all actually mean? Well, it informs us that the United States has an unwavering appreciation for the series it already knows and loves. Outside of that however, it shows that we’re starting to see a broader range of acknowledgement spreading across all genres. This all of course stems back to the topic of accessibility, and with the progress that is being made in that department, more and more individuals are able to find the series that most suits them. It’s through this accessibility that we’re seeing some pretty major strides forward globally, and it’s legitimately exciting to see what comes next for the industry.

The biggest part of the growth of anime on a global scale will always come down to how easy it is to access. If there’s several different series that several different groups will appreciate, it’s important that all of them can be viewed. This is very much starting to become the case, especially as of the last few years, and if anything, we have the legal streaming services that make this all possible to thank. Without them it’s highly unlikely that anime would ever be anywhere near the size it is today outside of Japan, as hordes of fans tune in to witness series such as Attack on Titan and Akashic Record.