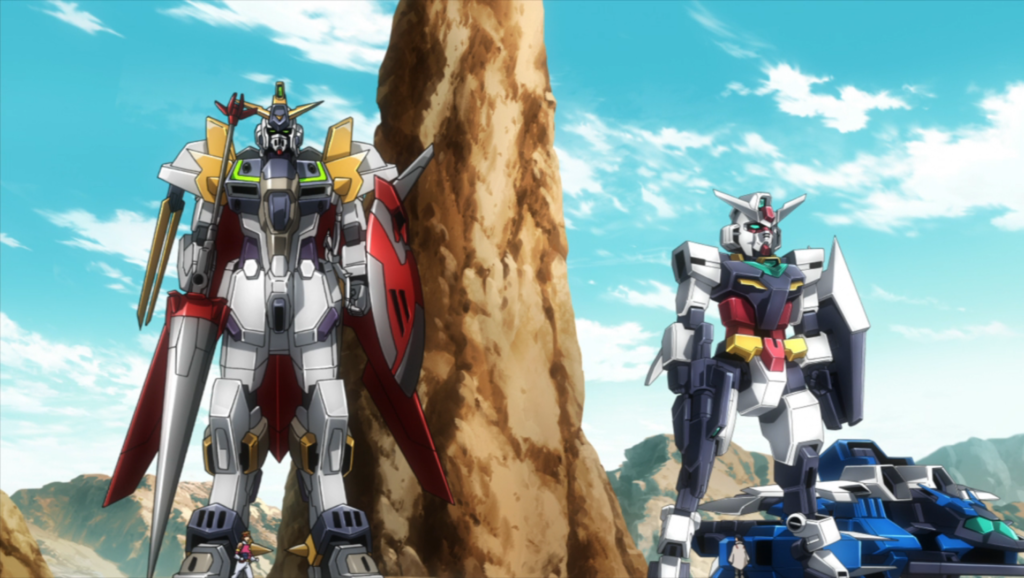 The latest Gundam Build anime is upon us, and it’s a sequel to last year’s Gundam Build Divers. If you haven’t seen that show or either of the Gundam Build Fighters anime, let us tell you what sets these anime apart from the hoards of the Mobile Suit Gundam shows in the existence. The gimmick to the Gundam Build sub-franchise is that instead of being mainline or even alternate universe Gundam shows, they’re GunPLA shows; Yes, the geniuses over at Sunrise finally had the bright idea of putting the plastic model kits based on everybody’s favorite mecha into anime of their very own. That way, they can introduce even more robots and variations on older Gundams that will ultimately sell even more kits! The original Gundam Build Fighters is an extremely pleasant and entertaining light watch and I’m glad to see enough people have been interested in this project to keep these shows going. This all said, we’re not here today to talk about whether these shows are good on there own; We’re going to discuss whether or not established Gundam fans will vibe with Gundam Build Divers Re:Rise.

While Gundam Build Divers Re:Rise is a sequel to last year’s Gundam Build Divers and the fourth show to bear the Gundam Build name, you thankfully don’t have to have watched it all to hop in here. Gundam Build Fighters and Gundam Build Fighters Try are a separate canon entirely that features a different Gunpla gimmick than Divers. In Build Divers, players build and customize their model kits in the real world and are then able to scan their Gunpla into an MMO in which they’re able to pilot their mechs and make them punch and kick each other online. Of course, the show features near future technology so the MMO world can be experienced like the real world, although I don’t think there are any isekai ‘if you die in the game you die in real life’ shenanigans here. Again with a set up like this, the show’s aimed at younger audiences than the main series’ political and war themed narratives are but they’re all just excuses to watch robots go at it. Despite being a sequel, Build Divers and Build Divers Re:Rise feature different casts so you really can just Dive in. Get it?

Being a Mobile Suit Gundam fan doesn’t boil down to any single component of the franchise and shows. No one’s just in it for the mobile suits, no one’s just in it for the unforgettable characters, and no one’s just in it for the war stories. Most people end up finding themselves thrown into the Gundam world, a place very difficult to escape once you make it in, due to some appreciation for the three. While there are probably people who do just build Gunpla and don’t really watch the anime, well, they wouldn’t be watching Gundam Build Divers Re:Rise anyway so I’m going to conveniently ignore them. While it’s the combination of the bots, the people, and the tales that make Gundam, fans are usually at least somewhat more partial to one of these very broad categories. Whether or not you’ll enjoy the various Gundam Build anime depends on where you fall. 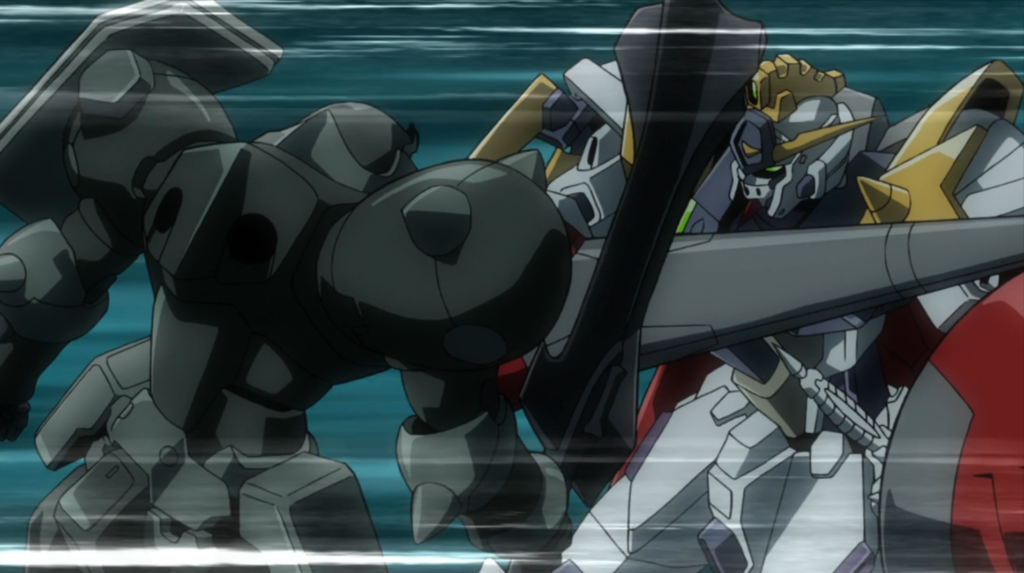 If you just really like watching big mechs duke it out, if Gundam’s main appeal to you is either the wide variety of suit designs and/or said suit designs crushing each other, absolutely watch Gundam Build Divers Re:Rise and the previous shows. Not having to worry about complex plots or reasons for having x Gundam and y mobile suit, the series is able to just introduce one suit after another. Often multiple new ones and new variants of older suits spanning all Gundam shows per episode. It’s pure mecha porn in the best way. The Divers Re:Rise protagonist Hiroto pilots the original to the series Core Gundam which is a little shrimp of a guy. His partner has a Gundam Justice Knight which is a new variant of an older suit from Gundam Seed Destiny.

You’re not just getting one or two Gundams fighting the same Zakus over and over either! Gundam Build Divers Re:Rise really gives you the best bang for your buck when it comes to how many different suits and fights you’re going to get, which actually you’re not paying anything since it’s premiering on the official Gundam YouTube Channel for free so all the more reason to give it ago. Since it brings suits in from all series, the potential dream match-ups are endless. Maybe one episode you’ll get Char’s Hyaku Shiki versus Heero Yui’s Wing Zero Endless Waltz version with the actual feathers. Celestia Gundam might have some words with Nobel Gundam. If I pray hard enough, someone might even give the Turn A Gundam another chance to shine. All sorts of matches and combinations you’d never see otherwise are front and center ever week, which makes the show worth watching alone.

If you’re really more into Gundam characters and Gundam canon, my recommendation for you is mixed; Obviously Build Divers is its own universe and so it’s not like you’ll need to watch it for your full Universal Century education. However, even beyond the Gunpla themselves, there are all sorts of cameos and references for hardcore fans to enjoy. Hell, the original Gundam Build Fighters even had noncanonical Ramba Ral as a secondary character in the show. I’d say it’s a stretch for any of the original people here to become as iconic as a Char or an Amuro but they still have some personality. Of course, you don’t have series creator Tomino or Iron-Blooded Orphan’s Mari Okada on this, no A-Plus talent on the script here., but Hiroto and gang definitely have some charm at least. 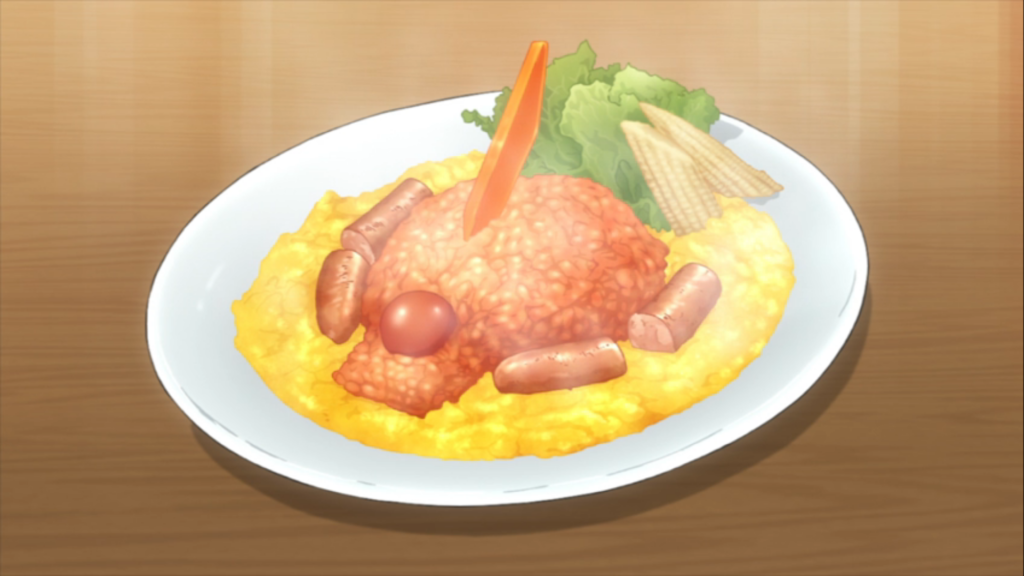 Unfortunately, if what appeals most to you about the Mobile Suit Gundam franchise are the anime themselves, with their stories about the horrors of war and human frailty, Gundam Build Divers Re:Rise probably won’t appeal to you. Not only does the series for the most part light-hearted and low stakes making it more amicable for kids, the focus on the Gunpla really prevents the writers from doing anything cutting edge. I’m not a UC only type of Gundam fan and think AU shows are some of the best of what the franchise has to offer, but I’d be lying if I told you that narratively this stood up to even the worst of mainline Gundam shows. That’s okay though, because it doesn’t really need to.

Is Gundam Build Divers Re:Rise for Gundam fans? Ultimately yes, it’s for Gundam fans, not fans of Gundam shows. You either have to be into the Gunpla culture or just a full fledged Gundam nerd to get the most out of this one. Those of you who also just want more cool mech battle will also want to check it out. If we were only getting Gundam Build shows maybe I wouldn’t be so happy with them, but we’ve gotten plenty of mainline Gundam projects both UC and AU in the past five years. Mobile Suit Gundam Thunderbolt and Iron Blooded War Orphans are arguably the best the series has been yet, or at least since series creator Yoshiyuki Tomino was heavily involved. Really having those and this is the best of all worlds.

You can watch Gundam Build Divers Re:Rise on the official Gundam YouTube channel and on Crunchyroll.