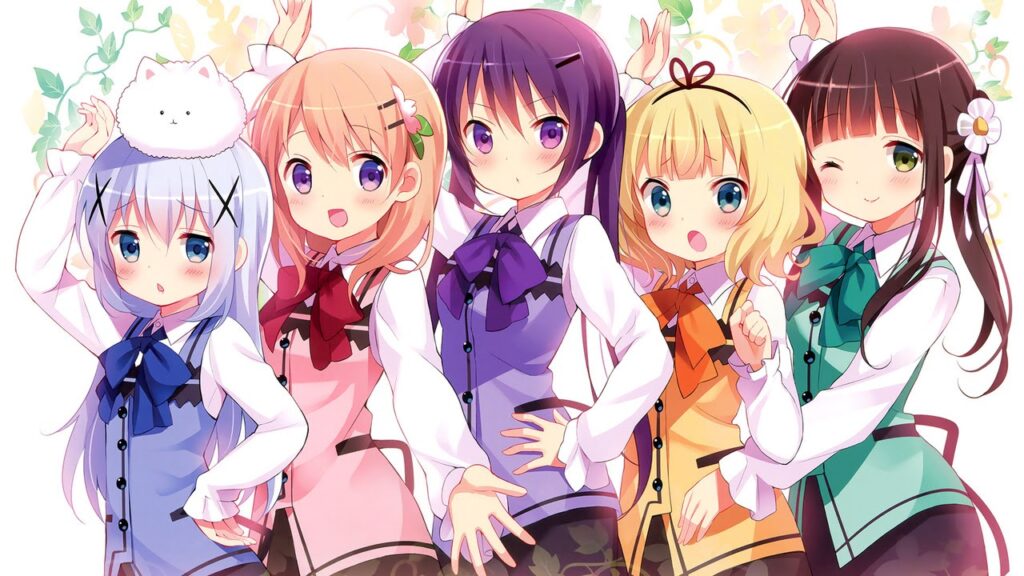 An abundance of cuteness is always on the menu in the manga and anime series Is The Order A Rabbit?

The series includes a mysterious and magical plotline involving the grandfather of one of the main characters.  But, for the most part, it’s just a sweet and funny story about girls who operate cafes.

Is the Order a Rabbit? tells the story of Cocoa, a young high school girl who works at a coffee shop in a small European town.

Cocoa Hoto (sometimes spelled Kokoa) is a sweet, energetic, and enthusiastic girl.  She can be a bit of a ditz. She’s also clumsy.

She arrives in town in the first episode and runs across the Rabbit House Cafe quite by accident.

She is surprised to find that despite the name, it is just an ordinary cafe and not a rabbit-themed one with real rabbits to pet.  The cafe does have one very round fuzzy blob of a pet named Tippy, an angora rabbit.   Real angora rabbits can apparently be quite fluffy, so Tippy takes this to the logical extreme.

Tippy is the cafe’s mascot (and more, as we will find out later).

Tippy likes to sit on people’s heads, especially Chino Kafu.  Chino works at the Rabbit House Cafe.  She helps Cocoa get settled in, once she realizes that Cocoa is meant to be there. Cocoa had stumbled upon the right place where she will live.

Chino is a quiet girl. She’s polite and reserved.

These two are soon joined by a third girl, Rize Tedeza.  She is tough and more mature than the other girls.  She is quite blunt and opinionated.  She also works at the cafe.

She often carries a gun and/ or a military knife.  It seems that her father, a soldier, trained her in self-defense and combat.

The series follows these girls and a few others who work for other cafes.

At some point, it should be noted that the cafe is not run entirely by a bunch of young schoolgirls. The girls are the focus, and they often seem to be running the place on their own.

But the cafe business is managed by Chino’s father, Takahiro.  Takahiro runs the place at night when it becomes a bar.

Then there is Tippy, the cute little rabbit.  Tippy is actually the reincarnation of Chino’s dead grandfather and Takahiro’s father.

Tippy can talk, although Chino tries to hide that from the others when the rabbit accidentally speaks in public.  Tippy talks to his son in private in a few episodes.

Tippy’s story is expanded upon throughout the series.

For example, in one episode (or “bunnisode”), we meet Aoyama Blue Mountain, a novelist who was once inspired by Chino’s grandfather.

She explains how an older gentleman once helped her, and as a result, she wrote a story called “The Barista Who Became A Rabbit.”  The man, who was Chino’s grandfather, had complained that he wanted to be a rabbit.

Aoyama becomes a reccuring character.  Her book gets made into a movie, and the girls watch it in bunnisode eight.

Aoyama eventually learns that Chino’s grandfather has died. With Chino’s help, the grandfather (as Tippy) somehow manages to encourage Aoyama to keep writing.

In bunnisode nine, we get a flashback to when Chino’s grandfather was still alive, and Cocoa was a little girl.

It seems that Cocoa had briefly met Chino’s grandfather and his pet bunny, Tippy.  Young Cocoa playfully “casts a spell” to grant the grandfather’s wish to become a rabbit.

It’s not clear if the incident was real, as the next immediate scene shows Cocoa sleeping with her head resting on Tippy.  Also, Cocoa is supposed to be a transfer student to the town, so it’s not clear where this scene would have taken place.

Other girls run other cafes in town.  These girls are all friendly, despite working for rival cafes.

In the second bunnisode, we meet Chiya Ujimatsu.  She works in her family’s cafe, Ama Usa An.  Ama Usa An is a very Japanese cafe and sweet shop.

In keeping with the cafe’s theme, Chiya wears a kimono.  She is formal and gentle.

Ama Usa An has a mascot, a black rabbit named Anko.  Ama Usa An can translate as “Sweet Rabbit Retreat.”

Sharo Kirima (also spelled Syaro) works at the Fleur de Lapin cafe. She is bashful and shy.  The others think that she is rich.  Fleur de Lapin is French for “Bunny Flower.”

A note on names:  Many of the characters are named after drinks — it makes more sense in Japanese naming order (family name first).  It’s a bit punny, but fitting.

Hoto Cocoa is named after hot chocolate.  Chino Kafu, or Kafu Chino, is Cappuccino.  Rize is named for a type of tea, The de Alizes.

Maya Joga, one of Chino’s classmates, is named for a type of Darjeeling.   Megumi Natsu, another classmate who sometimes helps out at the Rabbit House Cafe, is named for nutmeg.

Is The Order A Rabbit? started out with a manga.  The manga started in March of 2011.  The manga is a yonkoma (four-panel) series.

A third season, Is The Order A Rabbit? BLOOM, has been announced.  The third season is expected to arrive in October of 2020.

An OVA, Is the Order A Rabbit?? ~ Dear My Sister ~ came out in 2017.  In it, Cocoa visits her family.  There is a fireworks festival at the end.  Some Japanese theaters showed the film before it went to home video.

Some consider Dear My Sister to be a special episode of the anime rather than a movie, because it covers chapters of the manga. Unlike some anime movies, it doesn’t tell a separate story.

Another OVA, Is the Order A Rabbit?? ~ Sing For You ~ came out in 2019.  The OVA features Chino, who will have a solo part in an upcoming school concert.

There is also a video game, called Is the Order a Rabbit?? Wonderful Party!   The game was released for the handheld PlayStation Vita.  Cocoa has to serve customers at the cafe, and there is a plot involving Chino’s birthday.

The setting of Is the Order a Rabbit? may look like a mixture of French and German, with a bit of Amsterdam or Venice canals mixed in. It also resembles something from Kiki’s Delivery Service.

But no, the girls are not living in Disneyland or some Japanese psuedo-European fantasy realm (see also: Konosuba and many, many others). Some people have suggested that it plausibly could be a Japanese replica of a European town, but there’s no evidence of that.

Whatever the case may be, the show’s setting is actually based on Colmar, Alsace.

Alsace-Lorraine is a border region between France and Germany, which is why it looks like a mixture of the two.  It also changed hands several times — to Germany after the Franco-Prussian War, to France after World War I, to Germany during World War II and back to France since then.

World politics aside, it’s a lovely place for an anime such as Is the Order a Rabbit?

Is the Order a Rabbit? is available on Crunchyroll.