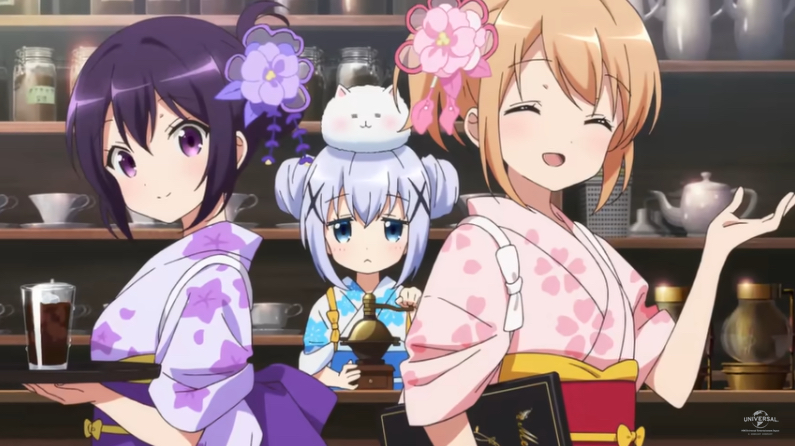 The girls of Rabbit House Cafe will return for a third serving of Is the Order a Rabbit? on October 10.

Crunchyroll ran the first two seasons of this adorable series in 2014-2015.

The third season will be called Is The Order a Rabbit? BLOOM.

NBCUniversal Anime/ Music released a promo video for the series in March. It suggests that the new season will feature more of the same cuteness and silliness as before.

We might also expect to see new side characters, such as the twin sisters Natsume and Era Jinja. These two have appeared in the manga, but have yet to appear in the anime.

According to Crunchyroll, the third season will also have new theme songs. Petit Rabbit will sing the opening song, Tenku Cafeteria. Chimame-Tai will sing Nakayoshi! Nakayoshi!, the ending song.

Petit Rabbit, which consists of the five main voice actors, had done previous theme songs for the series. Chimame-Tai consists of the voices of Chino and her friends Maya and Megu — Inori Minase, Sora Tokui, and Rie Murakawa.

The Twitter account for Is The Order A Rabbit? has been making all sorts of announcements lately as the third season approaches.

If you want to watch older episodes of Is The Order A Rabbit?, they have been putting them up on YouTube as part of the GochiUsa Summer Festival. (GochiUsa is an abbreviation for Gochuumon wa Usagi Desu ka?, the Japanese name for the series.)

There’s a catch, though. The episodes are only in Japanese with no English subtitles,  and older episodes are taken down as new ones go up.

There have also been new character goods, and a new song album cover.

About Is The Order a Rabbit?

The series tells about a group of schoolgirls who run cafes in a small European town.

Sweet, energetic, and ditzy Cocoa arrived in town in the first episode.  She soon made friends with Chino, granddaughter of the cafe’s original owner.

The episodes mostly dealt with the ridiculously cute adventures of Cocoa and Chino, and their friends Rize, Chiya, and Sharo.

However, the series also has a more serious and somewhat mysterious side.

Take Tippy, the Rabbit House Cafe’s rabbit mascot.  Tippy is actually the reincarnation of Chino’s grandfather. In the first two seasons, we learned quite a bit of his somewhat tragic background.

We also met Aoyama, a writer who once knew Chino’s grandfather.

Koi/ Houbunsha/ Is Your Order a BLOOM production committee?
Is the Order a Rabbit?
Join Our Discussions on Discord
Join Now