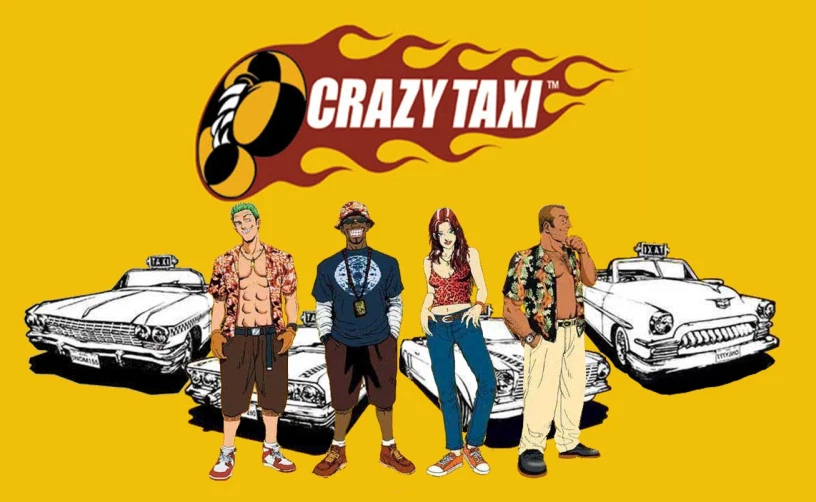 Crazy Taxi is a Powerhouse in the Sega Pantheon

At the turn of the new millennium, a game was released that changed the way arcade gamers played driving games, and also changed the way they thought of the intro to The Offspring’s “All I Want”. Crazy Taxi first appeared in arcades in 1999, and was ported to the Sega Dreamcast in 2000. The game’s use of late-90s punk bands like The Offspring and Bad Religion etched it into the minds of fans, and it’s been releasing titles on and off ever since.

Gameplay at the Time was Innovative and Broke the Mold

The main method of gameplay is picking up and delivering passengers to various locations. Players earn points or “fare” for each successful delivery, and can earn extra fare for performing stunts like drifting, jumping over hills, and narrowly missing other cars.

The player has a specific amount of time to deliver as many passengers as they can, and depending on how quickly each passenger reaches their destination, they’ll receive extra time on the clock. Designer and producer Keiji Kanno noted that adding time based on how well the player did was somewhat of a break from what other arcade games were doing at the time, which was a flat rate of time playing per money spent.

Crazy Taxi is notable for other game development reasons, as it was one of the first games to not specify the location of destinations, and instead used an arrow to point in the general direction, changing color depending on how close the player was. This often forced or allowed the player to make use of shortcuts and other environmental benefits instead of using just the streets. At the end of each round the player’s points are totaled up and they’re given a rank for how well they performed.

When the game was ported to the Dreamcast in 2000, the in-game city was redesigned so that players would have to spend time “learning the town” as Kanno put it, and would give them the experience of being lost in the city.

It was still based off the city of San Francisco, and featured hills to jump and trolleys to avoid, as well as real-world stores such as Pizza Hut, KFC, and even Tower Records. The original map was still included in the Dreamcast port, should players want to revisit the arcade version. 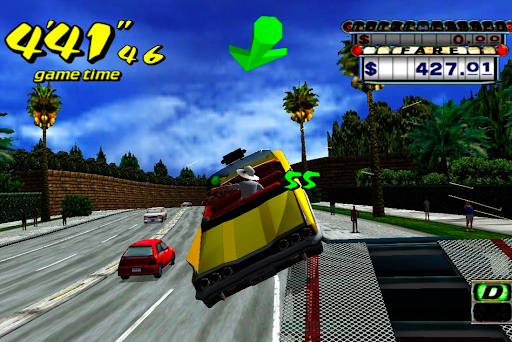 In 2001 Crazy Taxi 2 was released for the Dreamcast. It brought the game to a new city with two different maps based off of various locales in New York titled “Around Apple” and “Small Apple”. Because of New York’s relative flatness compared to San Francisco.

Crazy Taxi 2 introduced the Crazy Hop in order to perform jumps and even drive across rooftops if players so chose. It also introduced the Crazy Dash, allowing players to shoot forward and drift. Players can also pick up large parties of passengers, which would extend their time to deliver up to four passengers to four different locations. It introduced four new drivers, and brought back the hard rock and punk soundtrack, featuring The Offspring again in the initial cutscene.

In 2002 Sega released Crazy Taxi 3: High Roller for the Xbox. The original developer, Hitmaker, attempted to develop an online experience for Crazy Taxi entitled Crazy Taxi Next, but scrapped it and eventually developed Crazy Taxi 3.

This new iteration introduced a new location to drive in, a facsimile of Las Vegas known as Glitter Oasis. This level made use of the night setting that Hitmaker had developed for Crazy Taxi Next as part of an attempt to develop day and night cycles. Additionally the game also included minigames that would allow players to drive with different vehicles including strollers and carriages.

Bringing Crazy Taxi to Portable Systems has Been Rough

The series was also brought to the Game Boy Advance in 2003. Crazy Taxi: Catch a Ride attempted to bring the action and experience of the console game to a portable game system with less than stellar results.

It was essentially a port of the Dreamcast version, but the attempt to give it 100% fidelity left it slow and inscrutable to play. In 2007 Crazy Taxi came to mobile again with Crazy Taxi: Fare Wars. Fare Wars came to Playstation Portable and was largely a combination port of Crazy Taxi 1 and 2. It brought new multiplayer functions to the table, allowing players to collect fares in online matches where it was possible to steal fares and cause opponents to crash.

While this was a new way to play, the ports removed the punk and metal soundtrack from the original game, and furthermore removed the references to KFC, Pizza Hut, and other companies present in the original game.  While the addition of multiplayer and a remaster for the PSP were intriguing, it wasn’t quite enough to merit more than mixed reviews.

Since then two more attempts to bring Crazy Taxi to mobile have been released. 2014 saw the release of Crazy Taxi City Rush, which was somewhat styled after the game Temple Run, where the taxi was controlled by turning the phone to avoid cars and pedestrians. In 2017 Crazy Taxi Tycoon was released, which wasn’t a driving game at all. Also known as Crazy Taxi Gazillionaire, it was a business simulator and clicker that had players recruit drivers to collect fares and drive out an evil ridesharing company.

While the Crazy Taxi franchise has never seemed to recapture the acclaim of the first couple of games it still remains a beloved series among gamers. The game’s style and music helped it stand out from other arcade cabinets, while its game design made new strides in how games are made. It couldn’t teach you how to drive but it sure was a great way to spend $1.50.