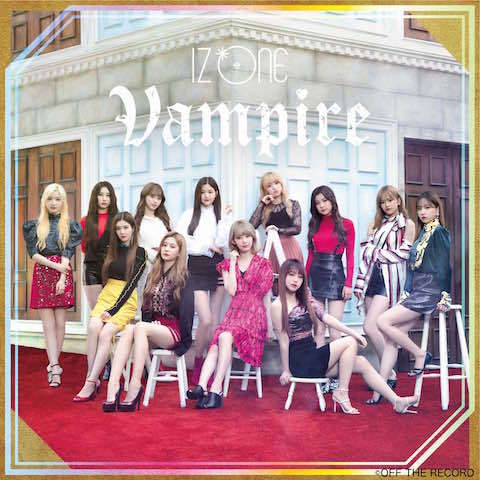 J-Pop and K-Pop aren’t genres. These words — which sow so much confusion when it comes to trying to describe sounds or explain what a Charli XCX album sounds like — refer to industries that dabble in all kinds of styles. In Japan, the Carpenters-lite jingles of Arashi appear alongside thumping electro-pop of Perfume, both of which fall under the same umbrella as whatever the hell Kenshi Yonezu is doing at the moment. Same goes with Korean music, which oftentimes slams hip-hop, dance-pop and whatever other elements they can fit into a single song. Yet these aren’t genres in and of themselves — these are silos referring to companies and artists based in a specific country, playing around with all kinds of ideas.

Now, these industries can favor specific approaches to music, which helps set them apart from one another. Korea-meets-Japan idol outfit IZ*ONE highlights this perfectly on their newest Japanese-language single, “Vampire.” Watch the gothic clip below.

Visually, it’s dark enough to fit the Transylvania vibes conjured up by the lyrics, written by AKB48 head honcho Yasushi Akimoto. It’s a classic bit of Akimoto metaphor, using the idea of vampires and bites on necks to convey the image of a kind of intense love that isn’t necessarily good for anyone involved. All of those elements work just fine.

What has proven somewhat divisive online is the actual music. “Vampire,” like the other two Japanese singles to come out from IZ*ONE, follow the AKB48 template very carefully, an approach that sounds quite similar to their other Japanese releases. Which makes sense, seeing as producer CHOCOLATE MIX returns to create the sound for this one. Not sure if they are to blame for the poor mixing that has stood out the most when people critique “Vampire,” but maybe they should double-check next time, because the actual sound of this thing does sound pretty weak on both YouTube and on streaming services, nowhere close to the Technicolor fare of “La Vie en Rose.” It would also be unfair to simply excuse this as some Japanese pop industry failing, as plenty of idol music coming out of the Akimoto universe still sound good on a purely technical level.

“Vampire,” though, also finds the vocals of seemingly every member of IZ*ONE coming together to form a concentrated blast of upbeat sound. Not all J-pop songs do this, but a lot of J-pop artists use this all-together-now technique to add a certain energy to their music. Most notably, this is many people’s sonic line-in-the-sand with AKB48 and associated acts, as all that singing at once can prove too claustrophobic for some, but is crushing in the best way for others. K-pop tends to emphasize solo segments more, which has been reflected in IZ*ONE’s Korean numbers. Those give every performer space to sing before coming together, while “Vampire” only does this in the video, with lots of voices always hanging around.

So while a lot of “Vampire” is boilerplate — a bad mix job, an alright idea but nowhere near, like, “UZA” — it also isn’t surprising that this one has spurred more dissenting opinions from a fandom that tends to go all-in on whatever the group does. This is a song using a formula mostly seen in J-pop, delivered to a group courting half of its fans from the world of K-pop. There’s bound to be some hiccups in that transition, but seeing as the whole point of this group is to bridge those two countries, the bump-in-the-road of “Vampire” reminds that it isn’t an easy task.