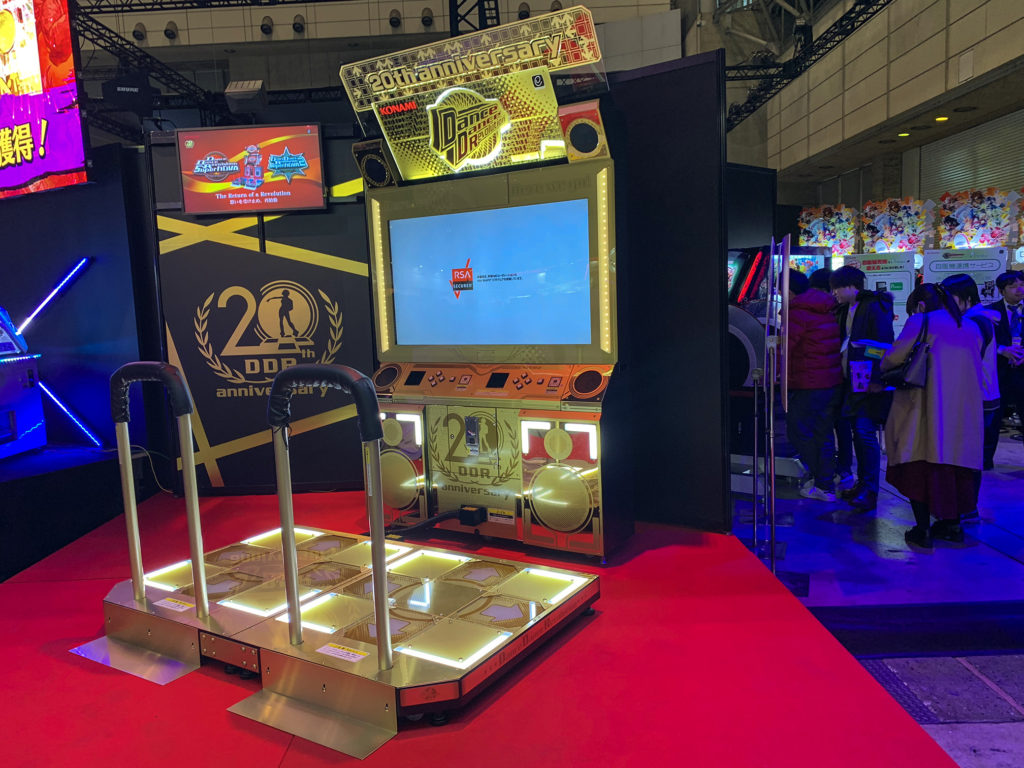 Since the beginning of when I started playing arcade games and investing a decent amount of time and my allowance into them, I’ve wanted to go to an arcade convention, and now that I have the opportunity to live in Japan, I’ve been graced with this opportunity. I’m going to share with you all my interaction with JAEPO 2019 at Makuhari Messe in Makuhari, Japan.

Upon arriving at Makuhari Messe, I was graced with a large welcome sign, a pretty clear sign that my day at JAEPO 2019 was about to begin. I got my business day pass and promptly proceeded to the show floor. Once entering the show floor, to my immediate left was KONAMI’s massive booth which had a showcase of some of their existing games such as DANCERUSH STARDOM, Bombergirl, Anima Lotta – a medal pusher game, Mah-jong Fight Club, and what I really wanted to see, the 20th anniversary edition of Dance Dance Revolution. 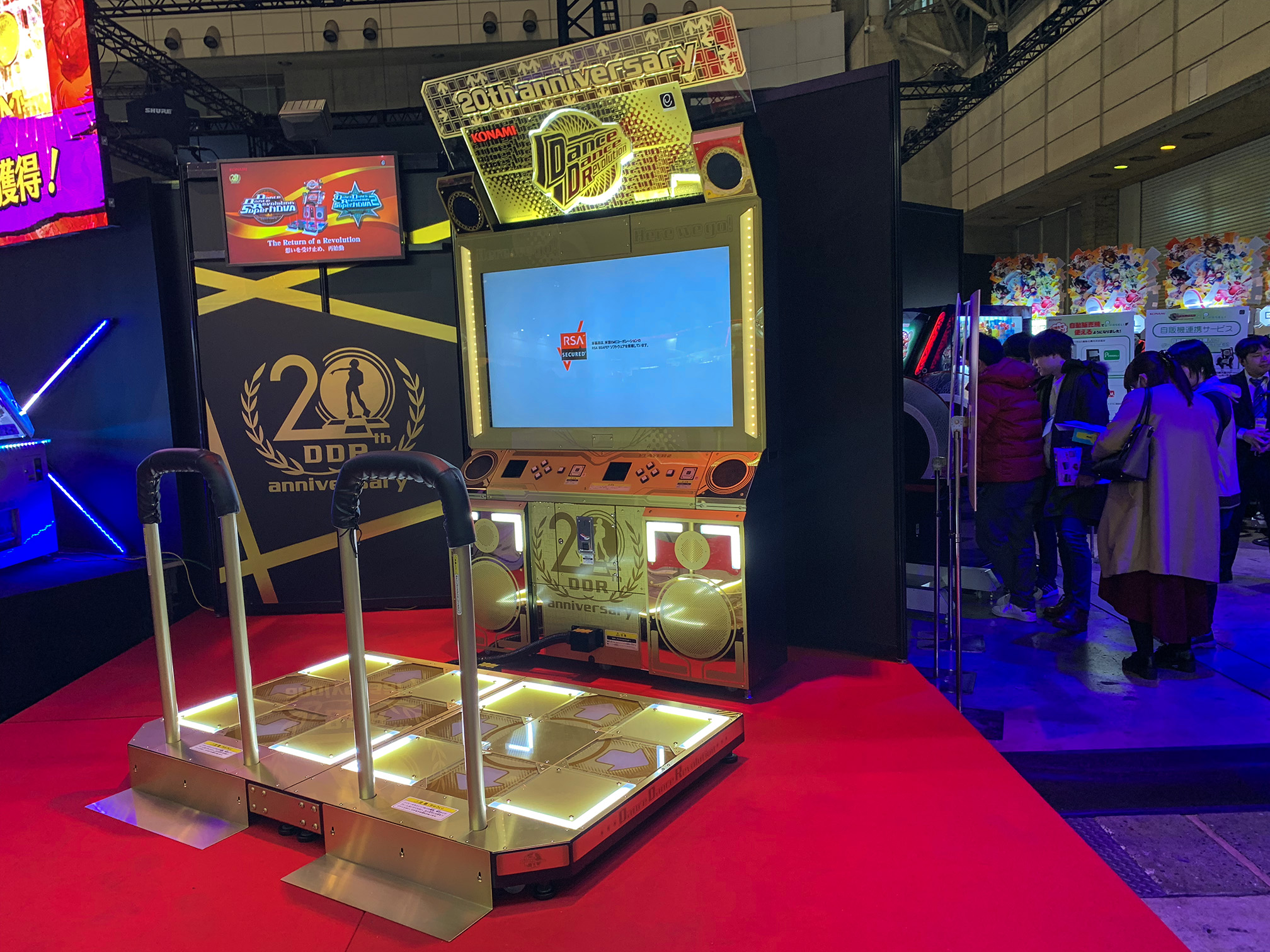 Dance Dance Revolution 20th Anniversary Edition was not playable on the show floor, but it was shown off in all of its golden glory as the only DDR machine present at Konami’s booth. As you may have seen on the internet, it’s a renewed version of its machine in a completely gold finish with LED lighting across the dance floor. It actually looks a lot better in person than it did in any photos I saw of it floating around the web. As we spoke with the Konami representatives at the booth, the updated cabinets are scheduled to be shipping around March of 2019 to arcades here in Japan. Their show floor stated that they had Sound Voltex Vivid Wave which we did a report on when it in the location test, but I was not able to find it anywhere on their show floor. It’s possible that this was due to the 25th being business only day and not for regular event attendees/fans.

After leaving the Konami booth, we went next door to the Namco Bandai booth which had an equally large, if not larger, booth. Front and center was the new JoJo’s Bizarre Adventure game Jojo’s Bizarre Adventure The Animation – Last Survivor which is a PUBG-style JoJo’s shooter game which the object of the game is, surprise, to be the Last Survivor. To the right of the JoJo game was a game which really caught my eye, and that was Sword Art Online Arcade – Deep Explorer. This is a game which players explore different levels/floors and level up your character. This also ties into a meta-game which has the user purchase cards from a separate attached machine to access new characters or abilities or weapons. This game is slated for a Spring release in Japan and it looks to be quite expansive from what little time I had to see it. 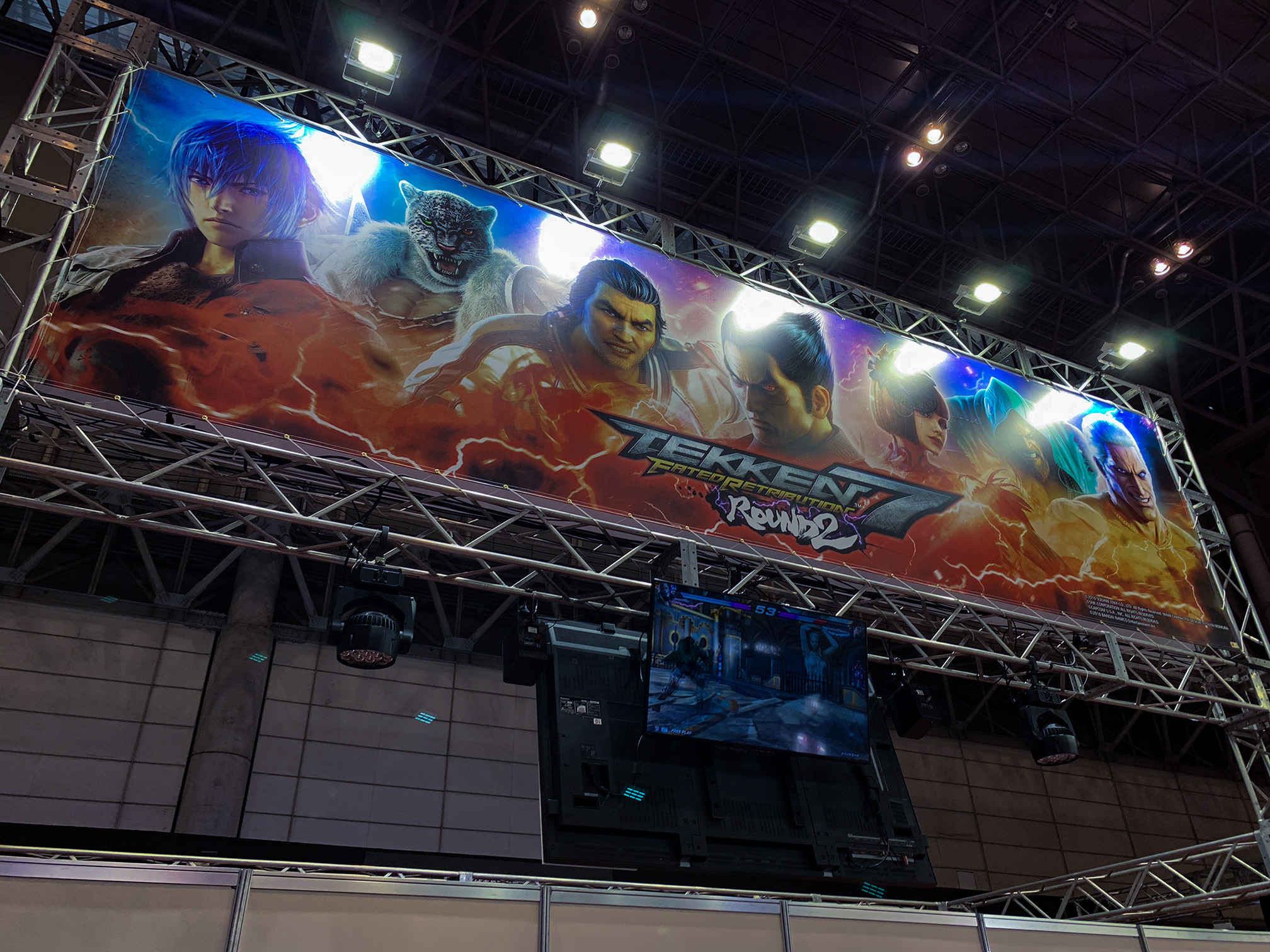 Inside the Namco Bandai booth, there was also Tekken 7 Fated Retribution Round 2 as well as Taiko no Tatsujin and a game called which has players run from animals trying to kill them. But the catch with the game where you’re running from the animals trying to kill you is that you really have to run. It’s about a 20-yard dash which you, the player, have to run from anything from a lion to a dinosaur. It’s quite fun to watch people play, but I don’t see any arcade which could really fit it in their locations, anywhere in the world from any of the arcades that I’ve been to.

After hanging out in the Namco Bandai booth for a while, we made our way to the MARVELOUS booth to play a game which I’ve personally had my eyes on since I saw its initial announcement, the tie-up game with Hardcore Tano-C, WACCA. WACCA is a rhythm game in the shape of a circle, a’la SEGA’s Maimai game (which we’ll get to in a while) but with gameplay like SEGA’s other rhythm game, Chunithm. The game uses a circular touch panel surrounding a circular screen and the player has to tap, hold, and swipe the notes which appear on the screen when they reach the appropriate position. The game is a lot more fun than I was expecting it to be, and I can see myself pumping many credits into the game once it releases later this year. After playing WACCA, we made our way over to the Taito booth. 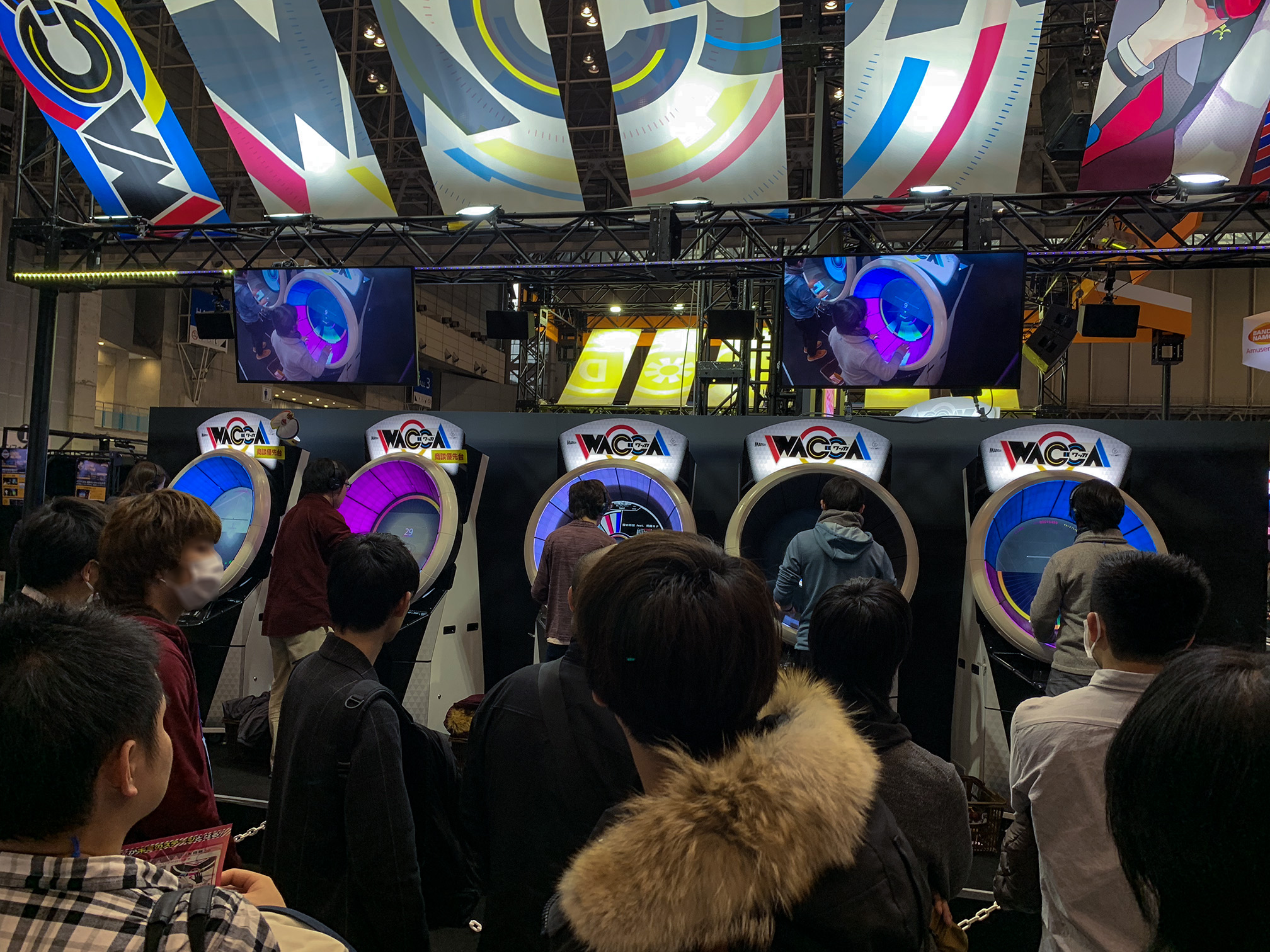 What surprised me about the Taito booth is that they were displaying Street Fighter V – Arcade Type-, rather than Capcom displaying this game. It played exactly like Street Fighter V Arcade Edition on PlayStation 4 or Xbox One, if you’re used to that, so nothing to phone home about here. They had a few really neat VR games on display such as a Captain Tsubasa soccer game, an Attack On Titan VR racing game, and Densha de GO!! VR. As a train lover and a father, they also had a kids version of titled Densha de GO!! Kids, where it teaches the youngin’s how to drive a train… fantastic. There really wasn’t anything super eye-catching at the Taito booth, however. I really like Taito’s products usually, so this was somewhat of a disappointment to me.

After the Taito booth, we made our way over to the SEGA booth. SEGA had Star Horse 4, a horse racing game on display, a Kemono Friends game titled Kemono Friends 3 – Planet Tours on display, and what I really wanted to see, Maimai Deluxe. A new Maimai cabinet which is running a new “deluxe” version of the game. After speaking with the SEGA staff, we were escorted to a private room where we had the luxury to play Maimai Deluxe all to our selves with no one watching or waiting to play. I personally have never really been a huge fan of the Maimai game just because I feel that there is too much going on at one time, but I have to be honest with you all, Maimai Deluxe was really, really, fun. It’s colorful, it’s cute, and it has quite a good soundtrack from the location test version that we played. It has all of the same gimmicks that you’d find on a Maimai game, but this time, it has a card system where you can obtain Maimai cards from the machine which unlocks special bonuses that can be used in the game. This game also uses the new joint online card system by Konami and other game producers ‘Amusement IC’. 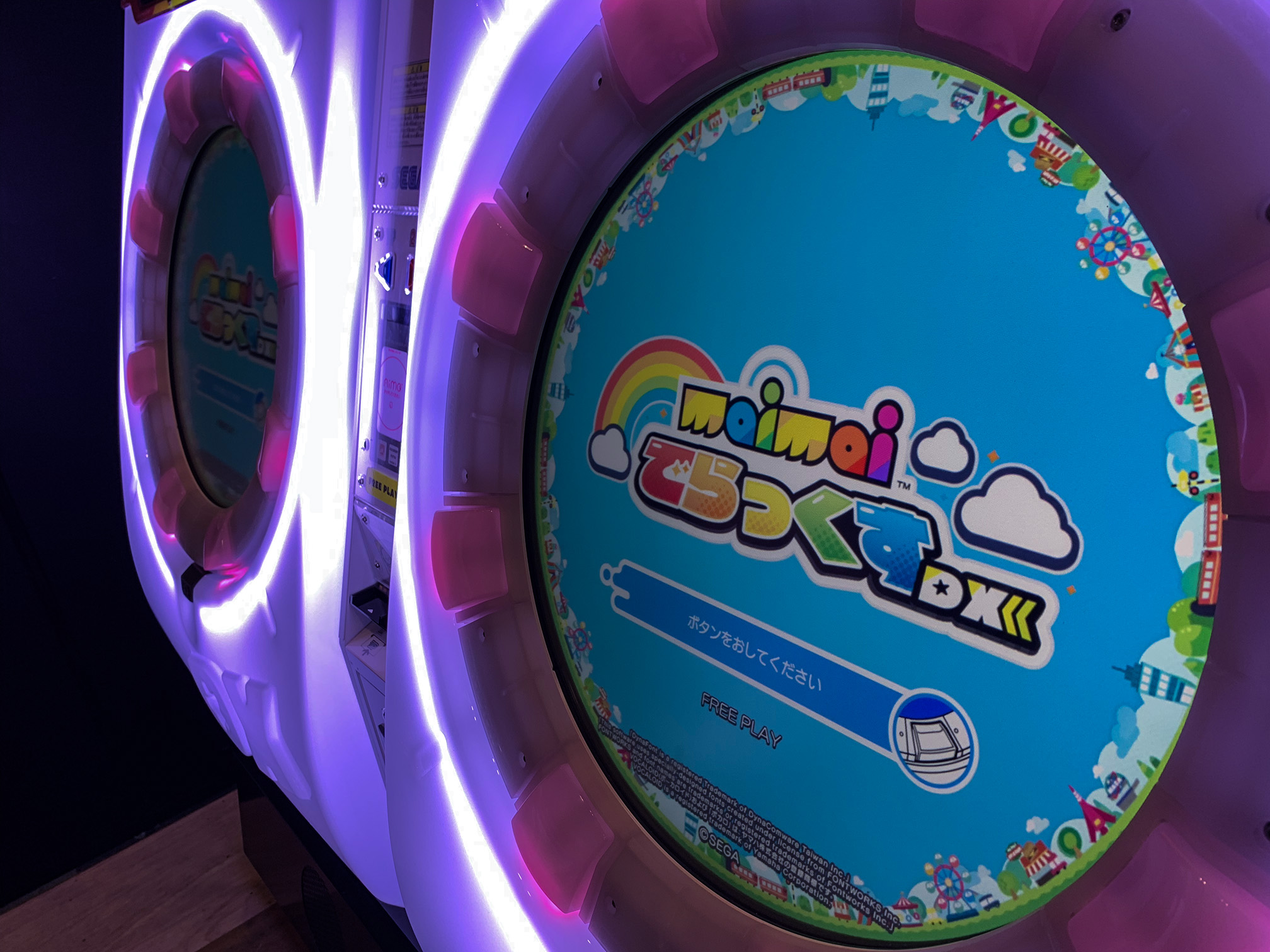 Throughout JAEPO, there are not only arcade games scattered throughout the show floor, but it’s also littered with purikura machines, UFO catchers, and content to fill said UFO catchers with. It was explicitly obvious that the expo is geared mainly at the operators of arcades, but if you’re a lover of arcades and appreciate the industry, it’s definitely something worth checking out. It’s a total blast!

We had a great time with the new games coming out around the horizon at JAEPO 2019 and look forward to bringing you more news and information about some of the titles that we mentioned here in future articles and interviews with the creators and staff of some of the titles that you heard about and saw here, so keep it locked here to OTAQUEST and share us your thoughts about what you think of the announcements and showings at JAEPO 2019 through our social networks!