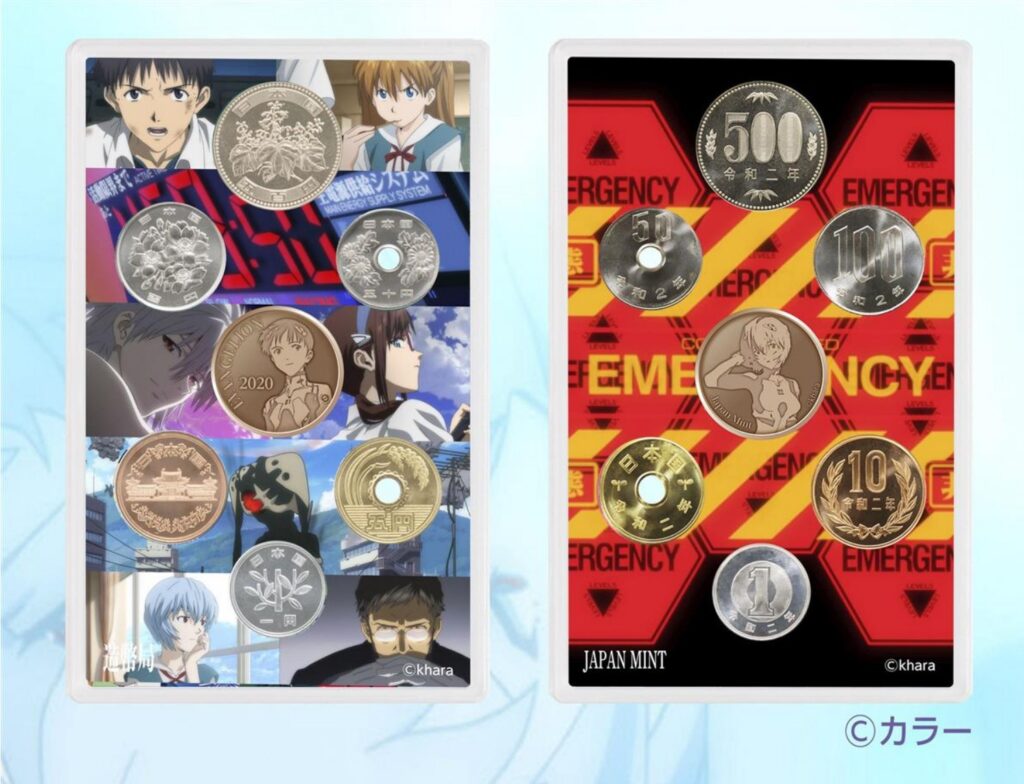 If you already have Neon Genesis Evangelion emergency rations, earphones, razor, and watch, why not add some Japan Mint coins to your collection?

Japan’s national mint announced on Aug. 27 that it will celebrate the 25th anniversary of the anime franchise with two Evangelion-themed commemorative coin sets.

This is not the mint’s first anime-themed coin set.

The more expensive “proof coin” set features the Eva Unit 01, better known as the robot that Gendo needed Shinji to get in.

The “tails” side of the coin-sized medal has the NERV symbol stamped on it.

The other, cheaper set features a two-headed medal with Shinji Ikari on one side and Rei Ayanami on the other.

Sorry, there is no Asuka coin. Fans will have to be satisfied with the tsundere redhead’s picture appearing on the card that the coins are set in, along with the commemorative folding screen case.

All of the coins are Reiwa Era.

The more expensive Eva Unit 01 set features unused mirror-finish proof coins, so they should be super shiny. The shiny set will cost 13700 yen, or about $130, unless the market crashes.

The Shinji and Rei set will feature “regular” unused coins, not proof coins. It will cost 2500 yen, or about $23.

Either set can be preordered through Sept. 17 at the Japan Mint’s online store. According to reports, the coin sets will also be available at Evangelion Stores in Ikebukuro, Shinjuku, Osaka, and Hakata.

The mint states that a limited number of these coin sets will be available.  According to the Japan Mint website, a lottery will be held if online preorders exceed the number of sets available.

Other Coins of the Realm

The Japan Mint normally concentrates on coining official currency. For example, last year the mint produced 43,000 50 yen pieces with the little hole in the middle.

However, the Japan Mint also makes commemorative coins. The mint produced coins for the 2020 Tokyo Olympics, the 50th anniversary of the Shinkansen, and other events.

Last year, it produced a coin set to celebrate 50 years of the family comedy anime series Sazae-san. Other examples would include a 2003 coin set to commemorate 40 years of Astro Boy; and a 2005 set celebrating the 35th anniversary of Doraemon.