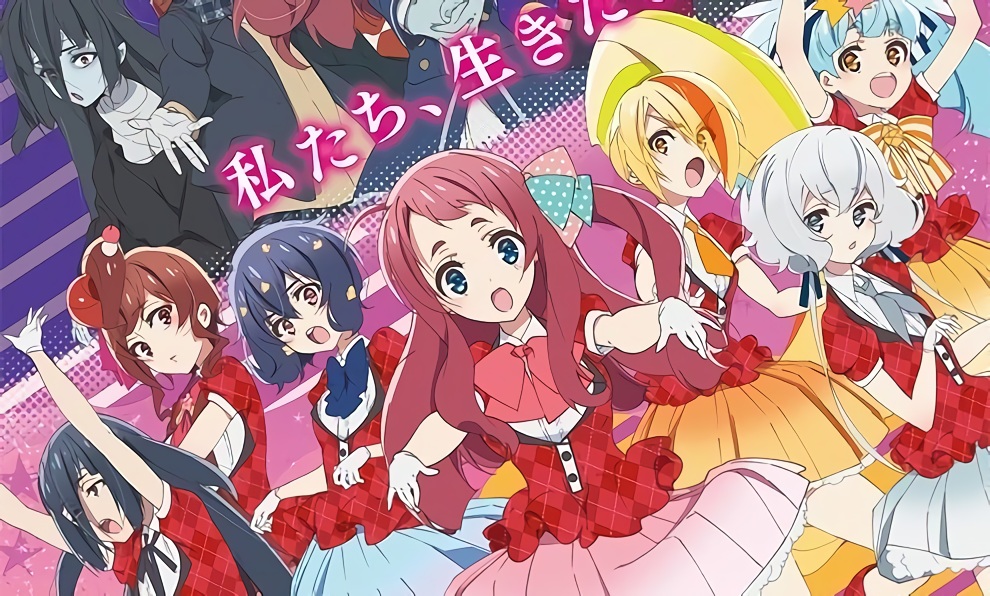 Japanese streaming site NicoNico recently conducted polled over 138,080 people in order to determine Japan’s favourite anime in 2018. Bearing a couple of surprises, the results are as follows: 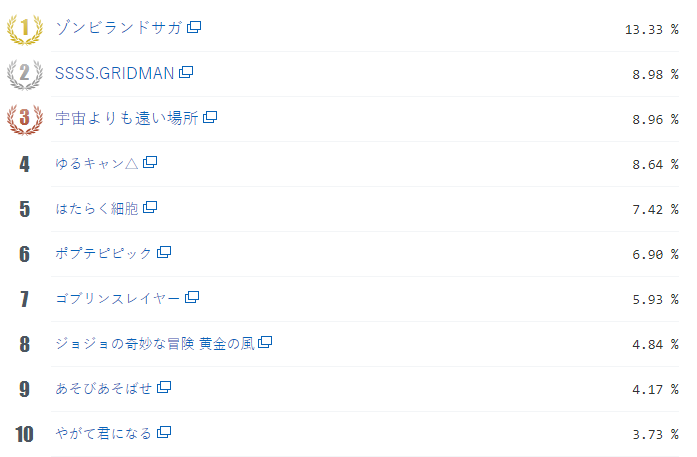 What stands out to me the most is the stark popularity difference of SSSS.GRIDMAN between Japan and the West. Given that it would almost be unfathomable to see it poll so high in the West, I have to say it took me by surprise even as a big fan of the show myself. I take it that there’s still a bit of a cultural gap to bridge, with Japanese fans being far more familiar with tokusatsu and probably don’t feel remotely as intimidated to pick it up. If you take away anything from this list, it’s that you should go and watch SSSS.GRIDMAN if you haven’t already.

While there is certainly a recency bias, it doesn’t feel all that strong. Even though it aired at the end of 2018, I don’t doubt that Zombieland Saga would’ve received the number one spot regardless of when it aired. The whooping 4.35% advantage it had over 2nd place says it all. Given how unique, accessible, and widely loved the show there wasn’t really much competition.

Outside of Zombieland Saga and SSSS.GRIDMAN polling at 1st and 2nd respectively, the only other Winter 2018 series was Goblin Slayer sitting at 7th and Bloom Into You sitting at 10th. A number of fans were surprised to see Bloom Into You making it on the list at all given the bad reception that Yuri anime had this year, so perhaps it just lucked out by being recent enough for people to vote for it.

A Place Further than the Universe and Yuru Camp were both among the most well respected and widely enjoyed shows of the year, so it feels pretty standard to see them at 3rd and 4th respectively. Given the measly 0.02% advantage that SSSS.GRIDMAN had over the former, there probably is a bit of recency bias at play here as well. That being said, I feel that the top 4 are all well deserved, even if the order is arguably a bit out of whack.

The biggest surprise was that DEVILMAN Crybaby didn’t make the running. Serving as a long awaited complete adaptation of Go Nagai’s classic Devilman manga, and a fantastic one at that, it’s unfortunate that it didn’t make the list.

It’s pretty exciting to see a poll done at this size. While it would be nice to see this replicated in the west, the closest thing we have are the annual Crunchyroll Anime Awards, which heavily restrict the voting selection to whatever six shows were most liked among their selection of judges. To put it into perspective, only two of the top 10 here (A Place Further Than the Universe and Zombieland Saga) were nominated for Crunchyroll’s “Anime of the Year” category, which I feel says a lot about how flawed such a system actually is, considering how popular some of these NicoNico polled shows were in the west as well.