Early Impressions of the Japanese Gaming Experiences on Apple Arcade 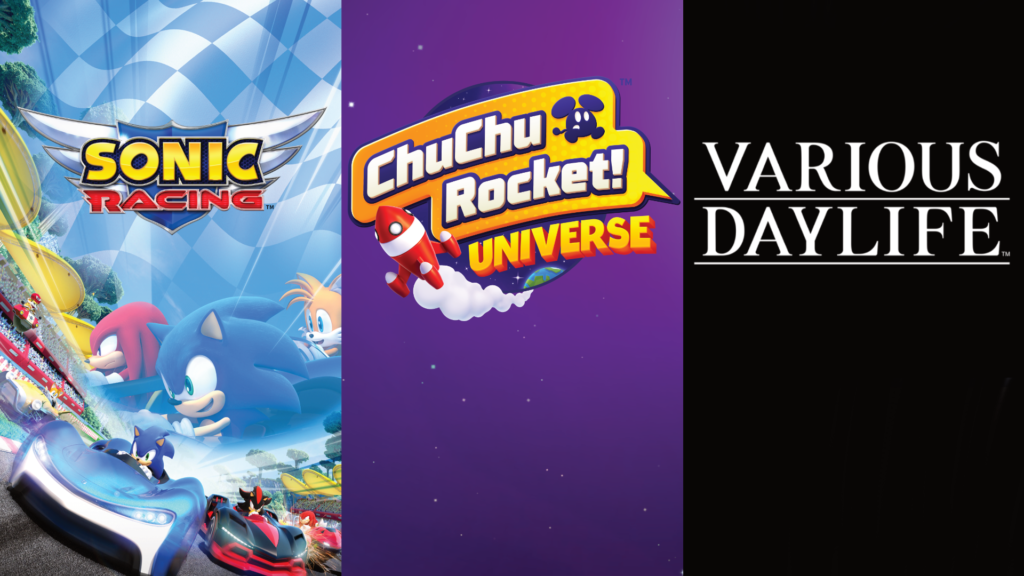 It feels like every company is trying their hand at a gaming subscription service. EA have EA Access, Microsoft and Games Pass, Sony has PlayStation now, and just the other day Google announced an Android-based gaming subscription service of their own called Google Play Pass. One eagerly anticipated service was Apple’s own Apple Arcade subscription service for Apple devices, mainly because, unlike all of those services, it has one key difference. While every other service I brought up brings together already-available games and products and makes them available for a single price, Apple Arcade is promising exclusive titles, with every game on Apple Arcade being only available, at least on iOS devices, through this service, with some games being outright exclusives and unavailable anywhere else. As Apple sticks their toe into the gaming industry to fund new titles from any studio they can give money to, I thought I’d check in on the Japanese games and franchises making their debut on Apple Arcade, share my early impressions and see if the service is actually worth the price of admission. 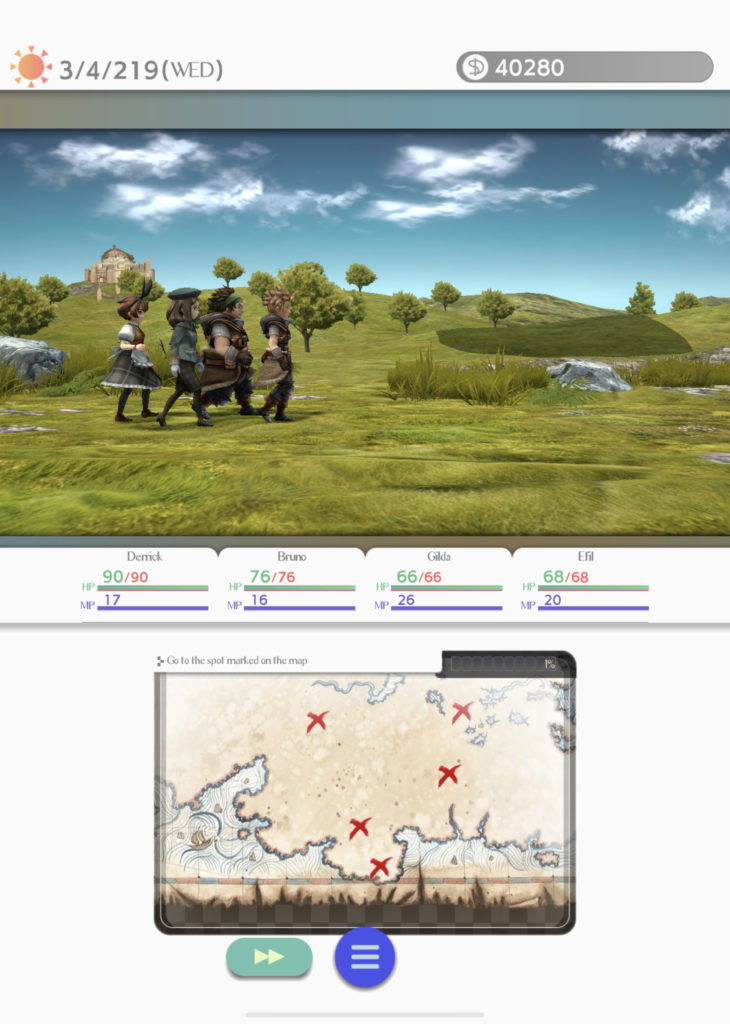 This is a rather unique game, not just within the list of titles I wanna talk about here but on the service as a whole, as it currently sits as the only JRPG on Apple Arcade at this time. The game has the same team behind it as who also worked on both Bravely Default and Octopath Traveler, two of the most beloved original IPs to come from Square Enix in recent years, too, and while you can see their influence in the game’s visual style, the gameplay itself does a lot to set itself apart from those titles and stake its own claim as a title worth playing.

While certainly a JRPG, the game takes a lot of cues from life sims such as Animal Crossing and Harvest Moon and the Rune Factory games. The game puts you in the role of a colonist who has just arrived at the coastal town of Antoecia, as you work at various jobs within the town to earn money alongside taking on expeditions into the great unknown outside the walls of the town to explore the mysterious lands that lie beyond. The game gives you a lot of ways within which you can experiment with your play with a huge array of jobs on offer for your character from Warrior to more unusual choices alongside it. Each has different perks to it both within and outside of combat, both within the jobs you perform and the exhibitions.

Exploration of the outside world and the base town take place entirely on a 2D plane, likely to simplify the experience and to make the game easier to control on a mobile screen, but this simplification hasn’t come at the cost of its battle system, thankfully. The battle system revolves around what the game calls the ‘three Cs’, Cha, Chain and Chance, constantly changing the status of your opponent before activating a Chance move in order to deal maximum damage, with more besides this.

The fear at this early stage of the experience is whether the game will begin to feel repetitive over time. The jobs are devoid of interaction, movement around the town can take a little longer than ideal due to taking place in 2D and you don’t even have free control of your party on the overworld when on an expedition, your party moving at a set speed with the only interaction from the player being when your team heads into battle or to enter the pause menu to set up camp. The game is also surprisingly inconsiderate for a mobile title, not allowing a player to save while on a quest, leaving a player open to a massive loss of progress by complete accident.

While I’m still early on in the adventure here, early impressions are positive, and though it doesn’t hold up to the other games developed by the same team, it’s certainly a decent, if impractical, mobile JRPG experience for Apple Arcade subscribers. 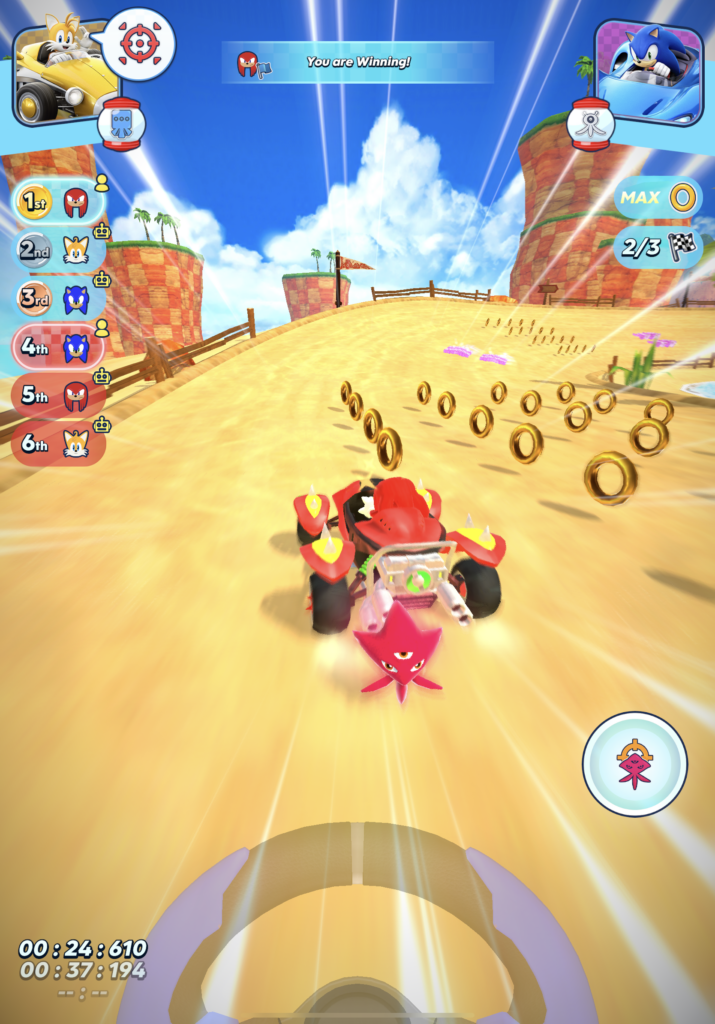 With Apple making a point to purchase exclusives for the service that are completely devoid of microtransactions and adverts for games in its Apple Arcade Service, and the lengthy time it can take for some games to develop, it’s perhaps inevitable that some games leave the impression that they were not developed from the ground up for the service but retrofitted late on. Sonic Racing is one such title, and its free-to-play, microtransaction-heavy roots shine strong here as they come in-between the user and a potentially enjoyable mobile racing experience.

Sonic Racing is a simplistic racing game that takes some of the gameplay elements from the recently-released Sonic Team Racing and implants it into a mobile format. To fit the smaller real estate and lack of buttons auto-acceleration is enforced, which reduces the tactical nuance that can go into a race, while races just aren’t really all that fun and feel rather clunky.

However, most egregious with this game is the leftover microtransaction-heavy in-game store. While no money can actually be spent here (as part of the terms of the Apple Arcade service), the game feels grindy as you’re forced to repeat races to earn items from a store, the payouts from races, costs of items and even the daily timer on the shop are a reminder of how the in-game economy was initially balanced towards encouraging players to spend money and don’t leave a positive impression on the player. The races aren’t engaging enough and the rewards feel like a chore as a result of its roots as a free-to-play title, and I can’t recommend this game as a reason to invest in the service. 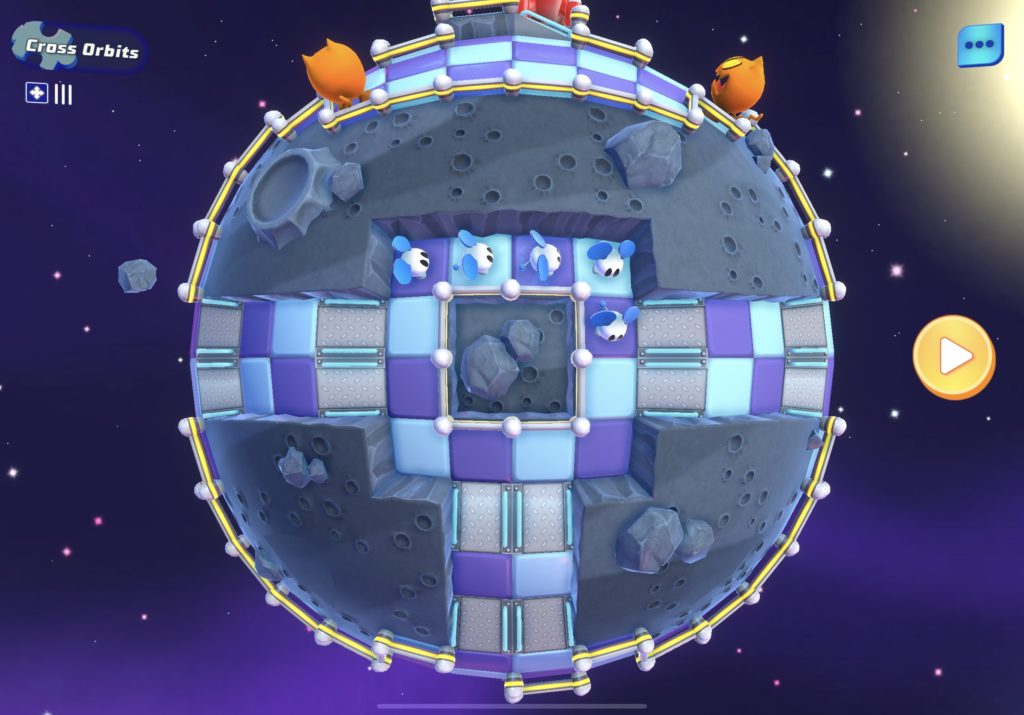 Now, this was a surprise! ChuChu Rocket has made its grand return with a brand new title from SEGA’s UK-based mobile gaming subsidiary, SEGA HARDlight. The puzzle gameplay of the series has always seemed like a perfect fit for mobile that it’s genuinely surprising that a new game in the series was not developed for mobile devices sooner. There was a mobile port of the original title back at the beginning of the decade, but these titles have since been removed from mobile storefronts, making this the only way to play the series on mobile devices in 2019.

This new title is set in space, with puzzles now taking place around large planets instead of solely on a flat, 2D plain as you’re tasked to send the ChuChus to safety and avoid the KapuKapus. There’s variety to these planets as well, as alongside more generic space designs we also have planets that take the shape of cakes or beaches. Puzzles become gradually more difficult as you progress through the game and are tasked with defeating the evil King Kapu.

There’s little about this game’s central concept that’s actually all that different from the original title that launched 2 decades ago for the SEGA Dreamcast, aside from the new setting and 3D environments, but after laying dormant for so long it hardly matters. A new game in the series after so long was more about making a statement of intent that it was back, and even if the concept has changed very little there’s a level of care put into this game by a team with genuine love for the original experience who want to do it justice, and having a large, full-length ChuChu Rocket experience on the go is such a welcome experience after all this time. Mix in some multiplayer and you have what can honestly be considered one of the service’s best launch games.

If you’re a fan of Japanese IPs and games then you may be disappointed at the lineup, as these three titles are about all you really have to choose from (though we do at least know that a game by Hironobu Sakaguchi is on the way). Saying that, the service is home to many more games, many of which are also fun and worth a go, with some of these other titles, like Sayonara Wild Hearts, being outright incredible (that particular game is currently a shoo-in for my game of the year at this moment in time).

Is the service good value for money? Well, it depends. It’s certainly worth giving these games a go during the offered 1 month trial period, but it’s difficult to judge the service’s long-term value beyond this. Having access to these games on iOS devices alongside Macs is a welcome advantage, but it’s difficult to argue that you should become invested in many of these games considering their save data is then locked to the Apple account you play these games with. While it doesn’t appear this save data will disappear when you choose to stop paying for the service, paying $5 a month for mobile titles, many of which based on this initial lineup lack long-term playability or aren’t all that fun, like Sonic Team Racing, or are also available on other gaming platforms. After all, non-Japanese titles such as Sayonara Wild Hearts has also released on Steam and Nintendo Switch, and the Shantae title that is currently exclusive to the service will soon be made available elsewhere. All Apple guarantee is that any games on Apple Arcade won’t be available on other mobile platforms or other subscription services. Even the few exceptions that I consider the service’s most compelling reasons to exist, such as ChuChu Rocket! Universe, could easily become available elsewhere at a later point, without being tied to the Apple ecosystem or a mobile device.

I’d definitely consider a free trial, in particular for ChuChu Rocket’s glorious return from hibernation, but even withholding my other reasons, I’m unsure whether the service has the longer games and more in-depth experiences, as well as the regular release schedule of such releases, to justify a paid subscription beyond the 1 month free trial. Apple Arcade promises a lot, but early impressions, in spite of some fun games, leave the jury out on its long-term value.