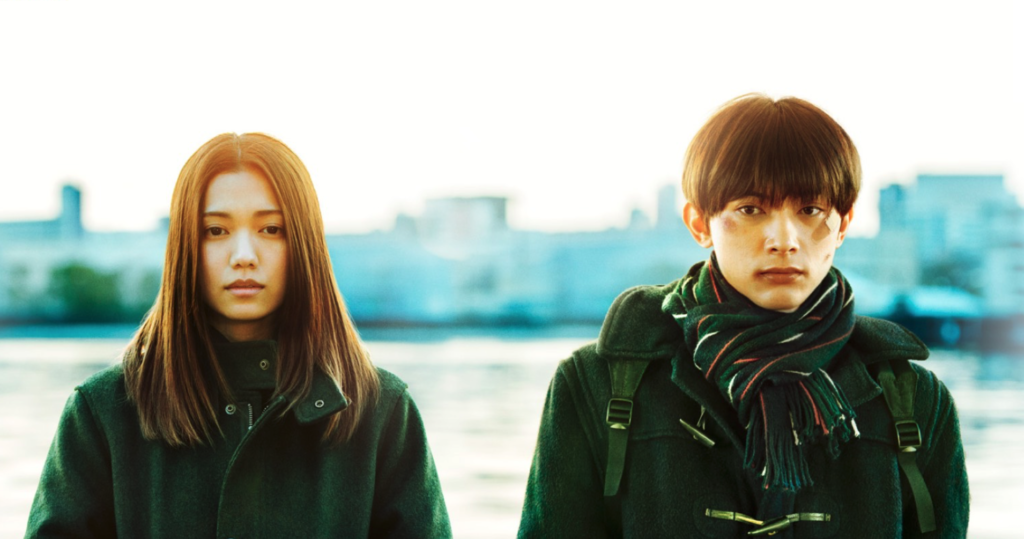 Welcome to the latest edition of Your Japanese Film Insight. This week, I’d like to discuss the various ways you can legally watch and access Japanese films outside of Japan, either through physical media or streaming services. For the Future Film Focus, I’d like to look towards an upcoming Japanese indie film set for a festival premiere in February ahead of a wider release in Japanese cinemas next year, before finally recommending a film which is easily accessible right now on Netflix worldwide, River’s Edge.

Where Can You Legally Watch Japanese Movies?

While Japanese cinema has always been accessible to some extent internationally for decades, it is since the beginning of the 21st century and particularly the last 5-10 years that access to the wide range of creative works beyond a few big-name directors has become easier. With already-established smaller companies growing and expanding their catalog of Japanese releases to larger distributors dipping their toes into the market, it’s easier than ever to access Japanese film without having to live in the country and scour the big chains and independent cinemas for the next big hit.

Third Window Films is perhaps one of the most influential companies on the list aside from the major streaming services due to their longevity and their expansion beyond distribution and into co-production as they worked with the industry to create new productions with both domestic and international appeal. The company releases a wide range of Japanese films both in size, scope and tone, from older cult classics like Tetsuo: The Iron Man or the upcoming planned release of the 1985 film The Legend of the Stardust Brothers, to modern hits like Confessions or One Cut of the Dead and indie releases such as the company’s Kickstarter project New Directors from Japan, which collected works from three up-and-coming directors into a single release.

While the titles licensed often hold a standard of quality that makes blind purchasing a less risky proposition, it’s their links to the industry and directors like Sion Sono and Takashi Miike which make the company worth keeping an eye on. For example, as part of this, they will be the company responsible for releasing Takashi Miike’s latest film, First Love, in the UK when it releases in March next year.

Criterion has made a name for itself by remastering and providing definitive releases to the very best films the medium of cinema has ever produced. Often bundled with various documentaries and other informative bonuses that help provide further insight into the works distributed, their releases are a gold standard unlike those seen anywhere else.

As a distributor of films from many countries around the world, many Japanese releases have found themselves within the Criterion collection, predominantly older films. This includes classics I’d like to discuss at a later point within this series, but films such as The Human Condition, both Lady Snowblood films and more have been given extensive releases from the company over the years, many worth their time. In celebration of their 1000th spine, they collected the entire collection of Showa-era Godzilla films into a handbook-bound larger release including various bonus features, original artwork and more. On top of that, the Criterion Channel has many of these films available for streaming as well, helping make them more accessible. 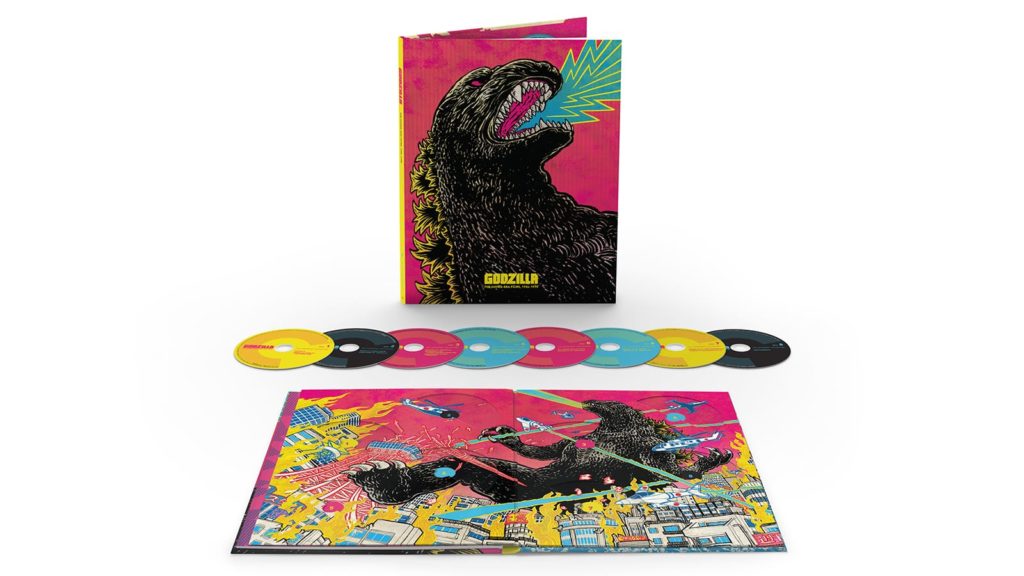 Both Netflix and Amazon Prime not only host Japanese cinema within their extensive streaming catalogs but, like Third Window Films and often on a larger scale due to their larger budgets, will also help to fund or provide assistance to a variety of Japanese film projects. For Netflix, this includes Sion Sono’s recent film and one of the director’s most impressive works, The Forest of Love, as well as River’s Edge. For Amazon, although their Japanese productions are often TV programming such as Ultraman: Orb, their financed TV series with Sion Sono, Tokyo Vampire Hotel, was also released as a feature film.

Both companies also make available with their subscriptions a range of Japanese films, albeit not a massive range, which allows for people who would otherwise be unwilling to purchase Japanese films out-of-pocket, especially without recommendation, to access such works. With both companies putting increased focus into Japanese markets the range and number of Japanese originals are only expected to increase going forward, too, including my recommendation from my last column, 37 Seconds.

These options, coupled with streaming services like the UK’s BFI Player, make it easier than ever to support Japanese film, with digital marketplaces also improving accessibility by reducing costs. This is all without mentioning film festivals such as the Japan Foundation Touring Film Programme in the UK and Japan Cuts, hosted in New York City every year by the Japan Society.

Shinjuku K’s Cinema will play host to New Cinema Week Tokyo 2020, a festival that seeks to highlight indie creators working within the film industry while bringing attention to the often unique and insightful creations they produce. Whether through a showcase of unique short films or the various feature-length screenings also planned at the event, the goal here is both to highlight the stories being told and to reward unknown creators who excel in their field, with monetary prizes on offer for the best film of the festival.

Ahead of an independent cinema release in 2020, this festival will host Reality of Love (愛うつつ), the feature film directorial debut of WebCM director Kosei Hana.

While looking at the various films scheduled at this event, this one was the one that drew my eye the most. Above all else, this is a film focused on the varying shapes of love within modern Japan, which in this film is an idea explored in the form of a character-driven discussion on the meaning of love itself that’s both personal and heartfelt. Alongside a showcase at this festival, the film has been projected at a variety of other movie festivals such as the Kanazawa Film Festival 2019 and the 20th TAMA NEW WAVE festival, where it was well-received. In particular, at the Kanazawa Film Festival, this film saw the director recognized by the festival as a promising new director, a positive signal towards both the director and the film’s qualities that definitely puts the work on my radar as one to watch.

Reality of Love set for release in Japanese cinemas in 2020.

While not casting the die back too far with this recommendation, having only released in 2018, the availability of River’s Edge on Netflix, considering the content of this week’s column about legal access to Japanese film, made it a fitting recommendation.

River’s Edge is ambiguously set during the latter half of the 1990s, with all the emotional baggage that holds. The economic bubble has burst, and family dynamics were in a rapid state of flux due to the lack of job security that threatened the more traditional family structure. For the youth, however, an overwhelming sense of hopelessness could be felt, as the economic reality of the world around them left the future at best uncertain, at worst a fallacy they could never view positively.

With a hostile world that lacks the social security it once had and a lack of guidance from the older generation that was supposed to guide and support them, emptiness and bitterness have taken root in the hearts of our main characters, Haruna Wakakusa and Ichiro Yamada, a disconnected young girl and a closeted gay boy. That’s not to suggest these people are worthy of our sympathy, however. Capable of good deeds, as seen by Haruna’s willingness to stick up for Ichiro when being bullied, they’re also dating the bully who causes them harm in the first place. The bully, meanwhile, is cheating on her with another girl willing to do what she’s unwilling to in the bedroom, while another girl, Kozue Yoshikawa, is a celebrity with a disassociation from the world around them and an eating disorder. Our main duo, and indeed all of the supporting cast, have become victims of a world collapsing in on itself, yet these circumstances have only left them uncaring, self-centered and cold.

The thing that brings at first our main duo together and, in time, the remaining characters, is the mostly-decomposed dead body they find abandoned in a ditch near the river. The body has been discarded and left to rot, yet, as though seeing themselves in the decaying pile of bones in front of them, it becomes their salvation, their solace, and the thing that keeps them grounded and sane in this world. It brings relief. 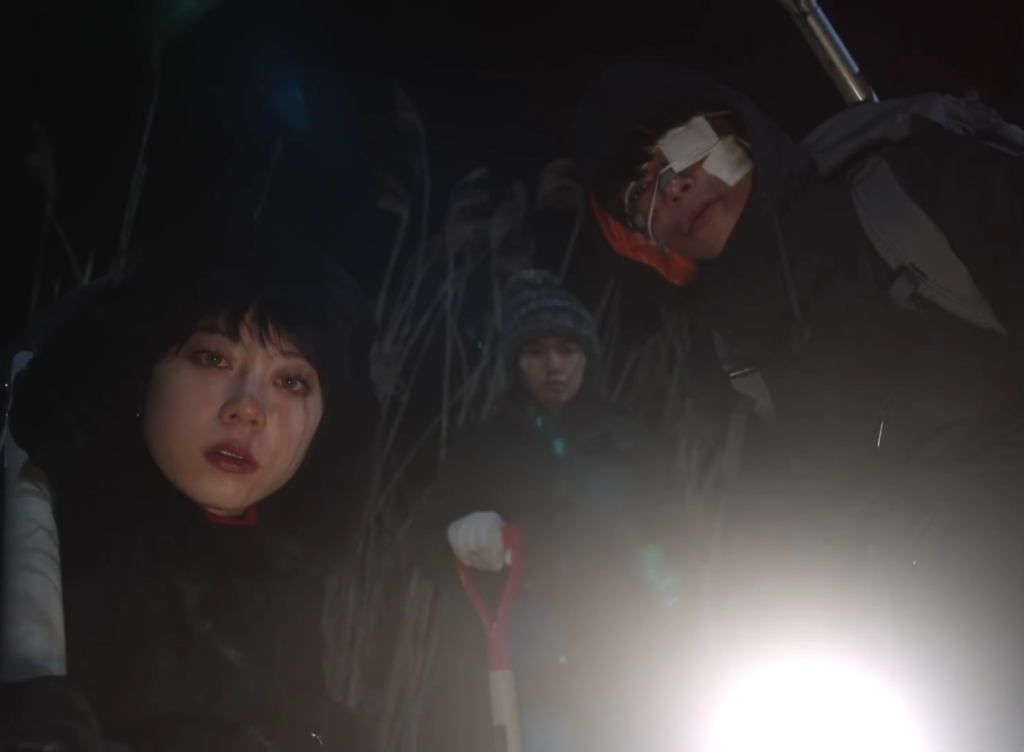 Our characters are self-centered to a destructive fault, with only the abnormal making them feel alive, and this is perhaps the thing which makes them all such compelling characters to follow over the course of the movie’s 2-hour runtime. These are people who are being sent out into the world at the worst moment the country has experienced since the end of the Second World War, lacking the certainty their fore-bearers once had, as they search for solace and meaning in this crazy world coming in at them at all sides. It’s an uncomfortable, stressful time to come of age, and the film accentuates this with a muted color palette and claustrophobic 4:3 aspect ratio, splicing uncomfortable interviews throughout which mess with the continuity and leave the viewer on edge.

Without anything certain to rely upon in the present and a future which looks increasingly precarious, where should one turn to for guidance? River’s Edge won’t hold these answers, but it will force you to re-examine the circumstances which cause it.

That brings us to the end of the second ‘Your Japanese Film Insight’. Are there any films you want to see discussed in the future? Contact me directly on Twitter @socialanigirl!

EDIT: An old version of this article stated that Third Window Films had been one of the companies involved in co-producing Takashi Miike’s First Love. This was an error, and has since been corrected.