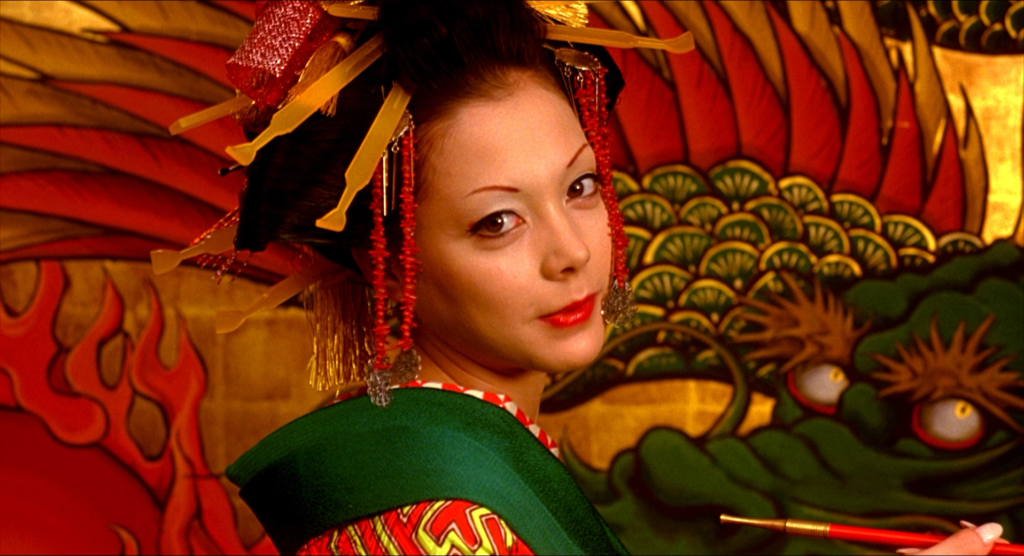 Last year, I was introduced to the bright, neon-filled, colorful worlds created at the hands of Japanese director Mika Ninagawa through the release of her then-newest film, Diner. The movie stuck in my mind ever since and, even if it was flawed in places, it stood apart for how it avoided the easy utilization style over substance, using this unique visual language to contribute to the story being told.

I’ve been meaning to check out her other works ever since, both inside and outside of the world of film, so the news recently that the director would be following up on her work on the film No Longer Human with a web series for Netflix seemed like a perfect excuse to dive in. Ahead of the release of Followers on February 27th, I chose to dive into Mika Ninagawa’s body of work to explore what her releases are trying to say and why they’re worth checking out. 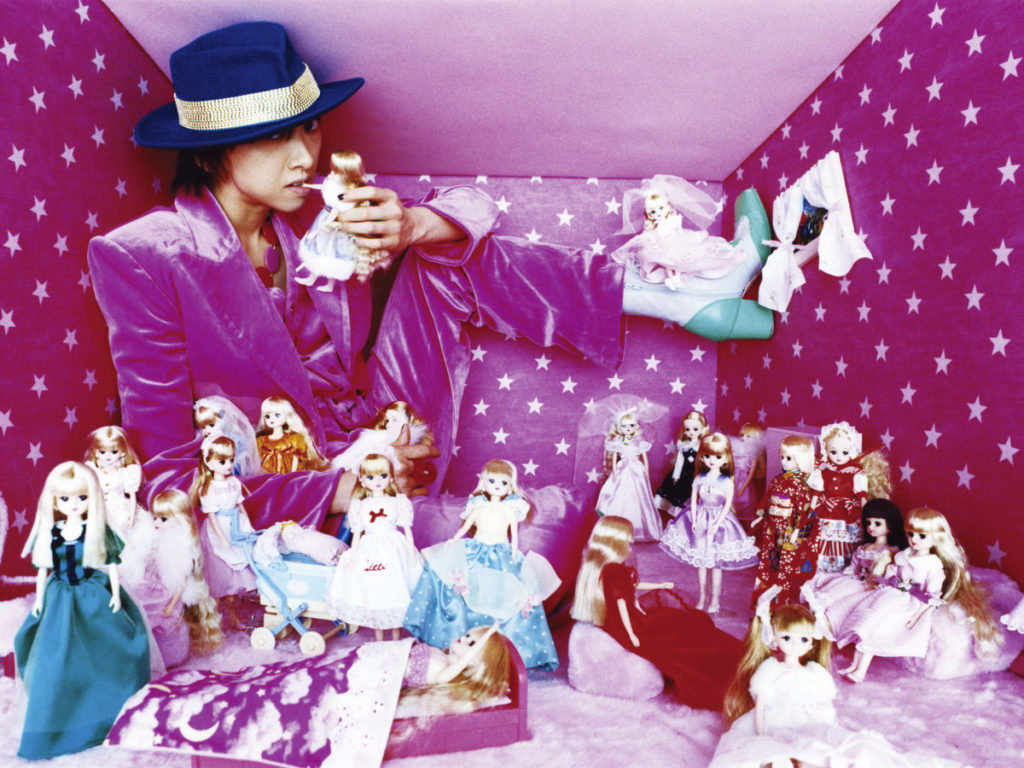 To discuss Mika Ninagawa’s filmography and what makes her work not just unique but engaging to watch, you don’t start with her directorial debut. Before Ninagawa was a director, she was (and continues to release work as) a well-established photographer, rising to prominence in the 1990s as part of the Onnanoko Shashin movement of photography, a movement defined by young female photographers who took images of the personal and everyday, often through a point-and-shoot style of photography. Even early on, she was winning various prestigious awards for her work photographing flowers, fish, landscapes, people and more. This includes world-famous awards like the Canon New Cosmos Award.

What immediately stands out when looking at her work is her saturated color palette, a style that came more into prominence for her as her style evolved over her career. She often saturates the colors of the subjects of her work, and this has been a mainstay of her personal work since her debut. One of her early solo photography books, Pink Rose Suite, published in 2001, holds a large focus on photography of natural life and flowers, with an emphasis on bright colors and a lack of focus and plentiful blur forcing observers to take in the entire scene and the atmosphere within it.

You see an increased emphasis on color as time goes on (even just 2 years later in Acid Bloom, colors for flowers are much more saturated than those in Pink Rose Suite), while there’s an increased desire to capture an exaggerated reality, photographing landscapes and people with resemblance to everyday scenes while being exaggerated through artificiality through collections such as Princess.

Importantly, however, these scenes aren’t simply using color as an easy way to catch viewers’ attention. Color in these works holds purpose, meaning, the point of these photographic and editing decisions being to say something, to make a point. Even as she moved away from the point-and-shoot style found in her early work and emblematic of the movement she grew to prominence in, her work still held onto many key ideas from the movement which defined her early work. She described those early days in an interview with artsy.net that her photographs were, and continue to be, influenced by ‘the fear of being consumed, people’s desires, the intense envy of the boys [and] the fact of being a woman.’

Which brings us back to Mika Ninagawa’s filmography. If her photography tells a story through a single still image with an emphasis on appearance to convey an emotion, Ninagawa’s approach to film is the opposite: her focus to filmmaking is to ensure she can tell an interesting story only she is able to, using her other talents to enhance and compliment this in response.

‘I absolutely want to make (the visuals) beautiful, but if a film is just beautiful it’s no different from a promotional video,’ Ninagawa stated in an interview with the Japan Times in 2007 around the release of her debut feature, Sakuran.

Her experiences of these industries are just as much of an influence to her unique style as it is her technical ability. With the film Helter Skelter, released in 2012, Mika Ninagawa used her experiences as a photographer in the fashion and entertainment industry, and the relentless expectations for beauty that come with it, to tell a story about unrealistic beauty standards and how the image of an ideal women can harm people both inside and outside the industry. 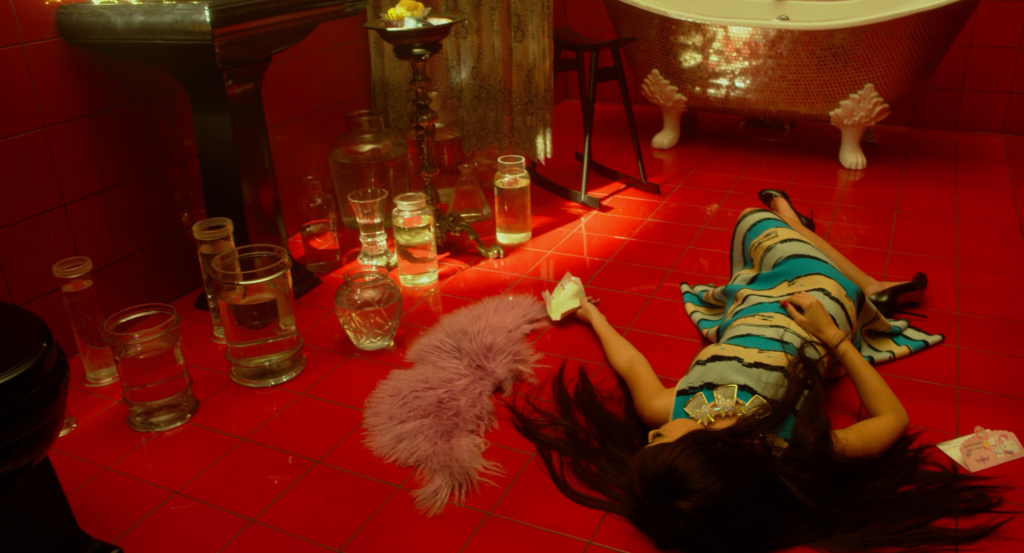 In Diner, one of Mika Ninagawa’s most recent films released last year and based on a popular manga, the everyday world of protagonist Kanako Oba is plain and dull, people walking in unison, emotionless, as the tedium of daily life drones on. As she becomes sucked into the underworld, the neon-lit diner and grotesque childish rooms where its various patrons dine are like a breath of fresh air, yet also look garish to the point of intimidation, leaving you, like Kanako, never truly comfortable in these new surroundings. Even in her debut feature, Sakuran (which I’ll discuss later), you see the traditionally-stuffy period setting brought to life through unrealistic hues of primary colors, intended to match the emotions of our characters than the realistic appearance of the period.

Mika Ninagawa’s filmography feels unique due to how it expands upon her work in other fields. Rather than taking her skills from one medium and creating shallow work that captures ideas from her work without the meaning which made them resonate, she expands upon her body of photography to tell stories that can only be told this way.

Rather than discuss an unrelated film for this section of the article, I would prefer to instead tackle the director’s most recent work. Set to debut on Netflix worldwide on February 27th, Followers is a web series by Mika Ninagawa about an aspiring actress who hits internet fame following a candid Instagram post, leading her to come into contact with several other Tokyo women.

As mentioned previously, Mika Ninagawa has firsthand experience of the entertainment industry not just through her work as a film director but as a photographer and video director over the course of her career. She worked on Heavy Rotation for AKB48, designing the CD jacket and directing the music video for one of the group’s most recognizable singles, as well as photography for many famous celebrities inside and outside of Japan.

The series’ premise centers around two women, fashion photographer Limi Nara (Miki Nakatani) and aspiring actress Natsume Hyakuta (Elaiza Ikeda). While Limi is full of confidence for her career and personal life, Natsume is the opposite, and perhaps for that exact reason, Limi becomes interested in the actress. She posts a photo of her on Instagram and it causes her popularity to explode, with all the pitfalls fame can bring. Also, for all Limi seems like she has it all, her desire for a child as she approaches 40 and other issues shows she has her own problems to deal with too. 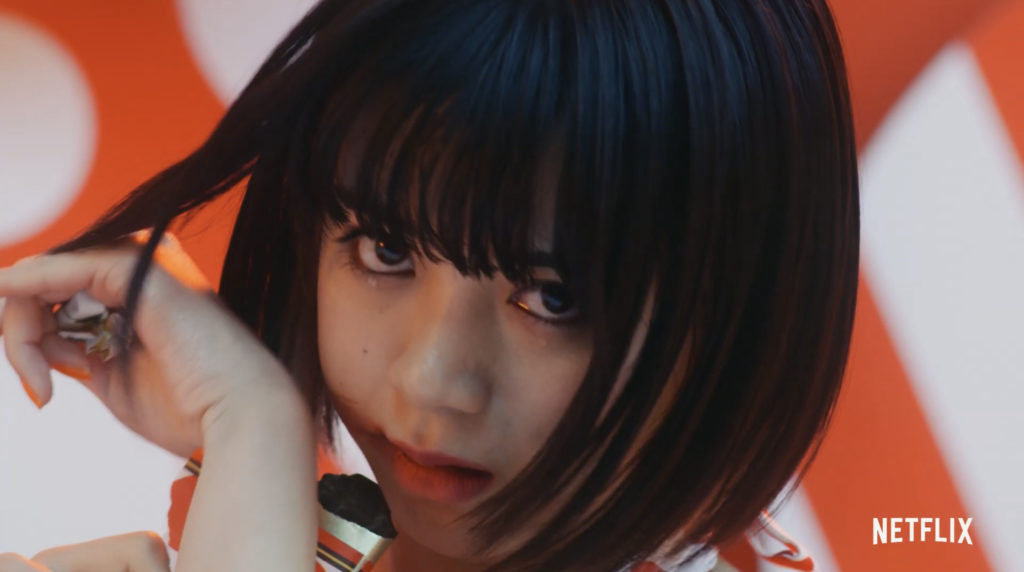 The only time she has handled similar subject matters was with 2012’s Helter Skelter I was impressed by the results, though I would have to admit it was my least favorite work from the director to date. As only her second film, parts of the direction felt lacking and I felt it was poorly structured in places, with pacing issues throughout. The core concept was strong, but other areas of the film brought it down. This concept, expanded into a full series with more experience under the director’s belt, is a tantalizing prospect, I’m excited to see what Mika Ninagawa is able to achieve.

If I had to recommend only one film from Mika Ninagawa’s filmography, I would have to single out her stunning debut, Sakuran. While it may be her first attempt at creating a feature film, I believe this is her strongest work to date, creating a mood piece that captures the emotions of the oiran and prostitutes of Edo Japan, as well as the power they wielded and their influence. 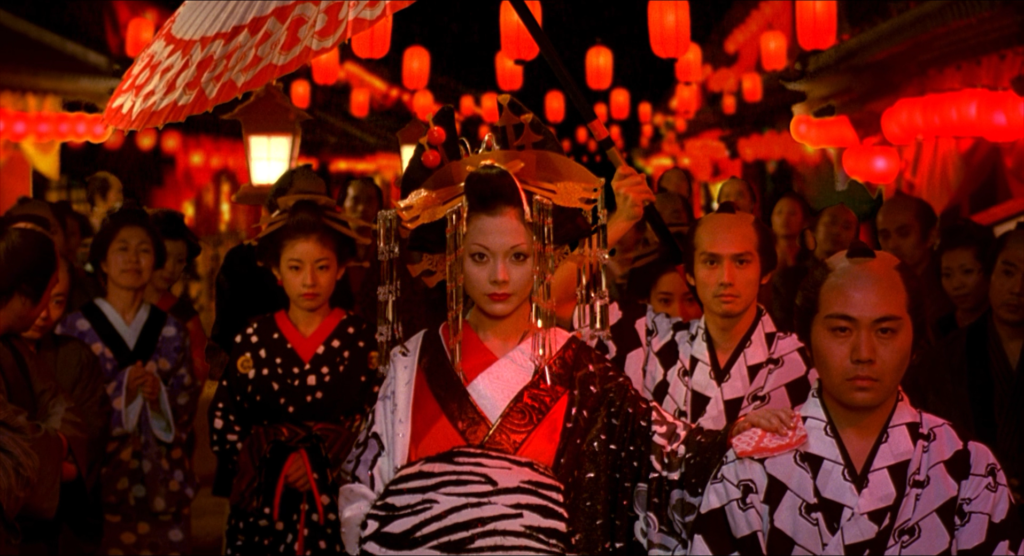 Sakuran is a period story recounting tales of the prostitutes of the Yoshiwara district, a popular nightlife district that still exists today, albeit in a different form. What stands this story apart from other period pieces about Edo Japan is a desire to eschewing strict visual realism in order to tell a tale that both reflects the period and the complexities of the people who lived within it, especially the prostitutes who worked in service in the Edo brothels.

The story centers around a rebellious member of the brothel, Kiyoha (Anna Tsuchiya), who entered the Tamagikuya brothel while still a child who immediately yearned to escape its walls. She clashes with the Chief Oiran of the brothel, Shohi (Miho Kanno), repeatedly as she grows up, before deciding to become an oiran herself as the film follows her work. The story’s focus on Kiyoha fiesta spirits, alongside the complex feelings of attachment to the brothel as she grows, various patrons who frequent the place, her genuine romance with Sojiro (Hiroki Narimiya), allows for a unique, feminine tale about life working as a prostitute at the time. 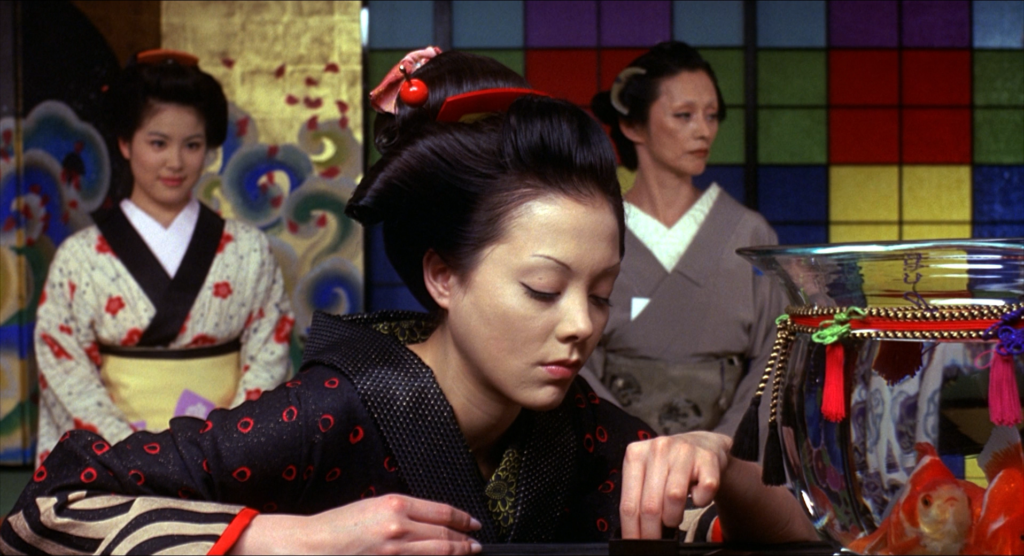 Returning to the 2007 Japan Times interview with Mika Ninagawa in regards to the film, it’s the power they wield over fashion and heir clients which allows for an empowering story within an environment where, in essence, women were bought and sold, to be told. ‘They were like superstars,’ she states, referring to how their choice of kimono would soon become a fashion trend in the city. The oiran sat in a seat of authority when meeting with a client, couldn’t sleep with them until a third visit with the oiran free to reject, and an honor system where choosing an oiran forbade you from sleeping with oiran from other brothels. The power they held, alongside their ability to wield it even while working as prostitutes, gave the women authority to control and make their own decisions.

Every other aspect of the production serves to emphasize their status as superstars with power and authority, from the bright, flashy kimonos which maybe betray reality but fit the reality of their influence on fashion. The blunt, modern way of talking, rather than the use of older forms of Japanese, is a further attempt to bridge the link between the oiran and celebrities (or, to look at it from today’s perspective, influencers). This fusion of modern and classical also spreads to set design, where traditional Japanese rooms and buildings are punctuated by goldfish and color and ornate extravagance likely inconvenient were it reflective of reality, while the music by Sheena Ringo which mixes pop and jazz also stands out. 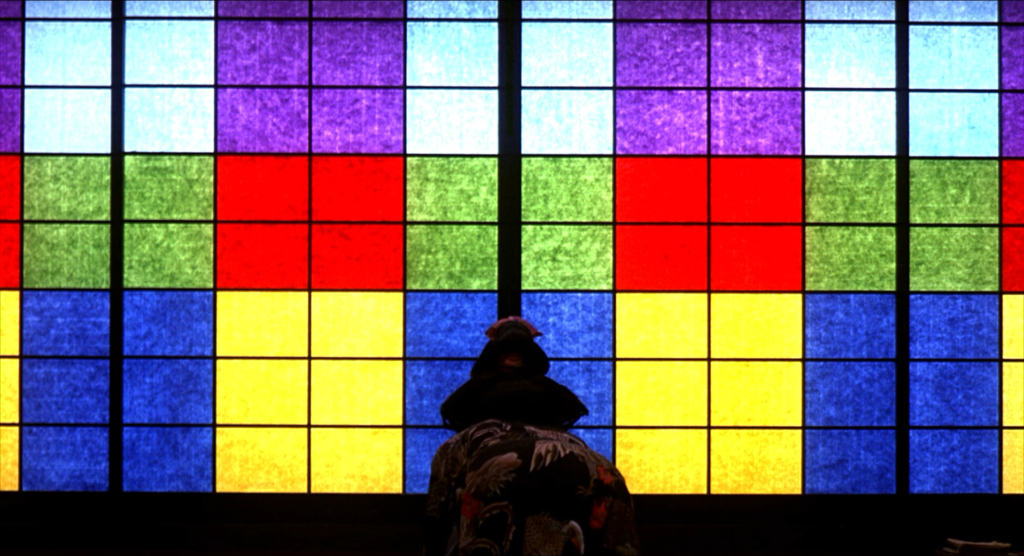 This is all in compliments to a strong story about the rebellious Kiyoha finding her authentic self and freedom in the world of Yoshiwara. Mika Ninagawa’s movie is an essential viewing experience for those seeking a new perspective on the period drama that entertains from start to finish. Refreshingly, this is also a Japanese production who’s manga source material, director, scriptwriter, and art director are all women.

If you would like to watch the film, the DVD-only English releases from the time are unfortunately out of print, yet remain relatively inexpensive on Amazon in the UK. Alternatively, the Japanese Blu Ray release includes English subtitles.