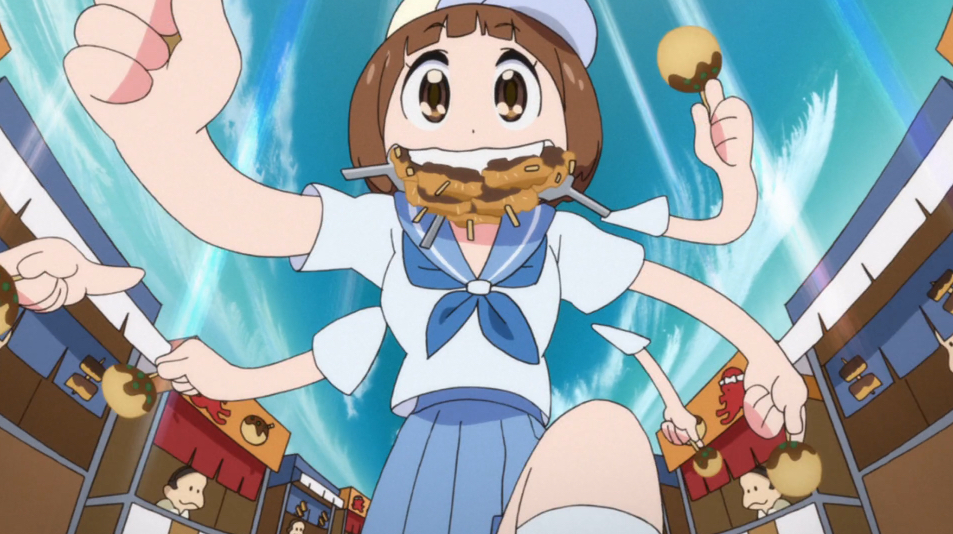 Food and Anime? You’ve come to the right place. Japanese people have very strong feelings about food and eating. You can witness this in the nation’s tradition of regional, localized cuisine. You must have okonomiyaki when you visit Hiroshima, or miso katsu in Nagoya.

Japan also has a whole industry built around omiyage. They are not just souvenirs, but an endless range of regional edible specialties to take home in a nice, decorative box. Traveling to Aomori? Bring home some apples or apple juice.

Naturally, this fascination with food extends to anime as well. A lot of anime characters have a favorite food, or maybe they just love to eat in general. Sometimes, food can even be a plot point.

Consider the following examples. And I won’t even mention Food Wars!:

Okonomiyaki is hard to explain. It’s not a pizza. No, it’s also not an omelet, either; that’s what omurice is for. It’s sort of noodly and sort of like a pancake, but not really.

It originated in Hiroshima, unless it was invented in Osaka.

The characters of the martial arts romantic comedy Ranma ½ don’t live in either Osaka or Hiroshima. The series is set in Nerima, northwest of Tokyo’s Yamanote Loop. And yet, okonomiyaki plays an important part in the series. It seems that ages ago, Genma agreed to have Ranma marry Ukyo, but only if Ukyo’s father gave Genma his okonomiyaki cart as a dowry. Nevermind that Ranma was already arranged to marry Akane at that point. Genma took the cart, but left Ukyo behind.

Ukyo grew up to become an okonomiyaki chef like her father. But she never forgot that promise. When she fights Ranma, all of her ninja-like moves and weapons are based on this mutant noodle-omelet-pizza dish. She uses a giant ‘battle spatula’ as her main weapon. She can throw smaller spatulas like they were shuriken. Ukyo also has ‘flour bombs,’ ‘tempura flash,’ ‘yakisoba rope,’ ‘adhesive batter,’ and ‘okonomiyaki bombs.’

Okonomiyaki also appears in other anime shows, although you have to have a keen eye to spot it. It can be a substitute for yakisoba in the festival episode, since both can be cooked on a hot plate.

In anime, food is sometimes used as a way to give a little regional flavor to an episode or a series.

When the Azumanga Daioh girls went to Okinawa, Osaka’s obsession with ‘sa-ta an-dagiiii’ probably confused a lot of Westerners.

Japanese Americans know sata andagi as ‘Okinawa dango.’ It’s fried, and the flour-based ingredients have little in common with normal mochi-based dango. But it is round and often served on a stick.

In America, it’s considered a festival food, commonly eaten at Obon. Its popularity probably comes from the fact that a lot of Japanese American families immigrated from Okinawa.

In Kill La Kill, Honnouji Academy goes to war in a full-scale invasion of the Kansai region. Naturally, Mako doesn’t care about that. She goes nuts for the takoyaki, okonomiyaki, and other Osaka street food.

The anime series Yatogame-chan Kansatsu Nikki is essentially a comical and farcical Nagoya travel and culture guide in an animated format. It’s chock full of Chubu regional in-jokes, including lots of jokes about all the ways you can add miso flavor to just about anything.

There are good reasons why Naruto is obsessed with ramen. When the series first started, Naruto pretty much lived off of instant cup ramen. This was an easy way for Masashi Kishimoto to illustrate that the boy was a poor orphan with an unbalanced diet. Naruto is also the name of a type of swirly-patterned kamaboko commonly found in ramen. So, it’s also a pun.

Kamaboko is sometimes translated as ‘fish cake,’ but ‘cake’ sounds a lot weirder than it actually is. It’s basically a tasty type of processed meat.

Ramen Ichiraku is considered the best ramen stand in Konohagakure. Throughout the series, Ichiraku would be used as an award to motivate Naruto, or to celebrate a successful mission, or even to remember a fallen comrade. The series even had a couple of filler episodes dedicated to the shop, its owner, and/or the owner’s daughter.

Ramen shows up a lot in Ranma ½. Shampoo is often seen delivering noodles for her family’s Cat Café.

There was also more than one instance where Ranma (inevitably in girl form) made some deliveries, including a ramen delivery race.

This 2018 comedy series treats eating ramen like a steamy love story. But they clearly know all there is to know about ramen, even obscure varieties.

Yakiniku… and Other Anime Food

On Naruto, Choji is known to be a big eater. However, one of his clear favorites is Yakiniku Q, the Korean barbecue restaurant in Konoha. The Ino-Shika-Cho trio eats there whenever there’s something to celebrate or commemorate. Choji seems to love Yakiniku Q about as much as Naruto loves Ichiraku Ramen.

In the first episode of Lucky Star, Konata, Tsukasa, and Miyuki talk about yakiniku. It’s actually part of a longer, rambling conversation about food in general. But a lot of their conversations tend to be long and rambling. They start out by talking about the right way to eat chocolate cornets and then continue with cream puffs and strawberry shortcake. The girls then talk about popsicles, soft-serve ice cream cones, curry rice, fried eggs, mayonnaise, donburi (both beef and chicken bowl varieties), natto, and yakitori skewers.

They finally finish with a discussion about yakiniku.

Konata’s concern? Keeping the green onion from falling off the grill while the beef cooks. Tsukasa likes to flip the meat, but Konata points out that you lose the onion that way. Later on in the same episode, Kagami comes up with a solution: cook the meat, and add the onion afterward. But that way, the onion doesn’t get roasted, Konata complains. The whole extended comedy routine just shows how important food is.

And I’ve just scratched the surface when it comes to food in anime. Keep paying attention to OTAQUEST for more food for thought and don’t forget to check Part 2 (link below).