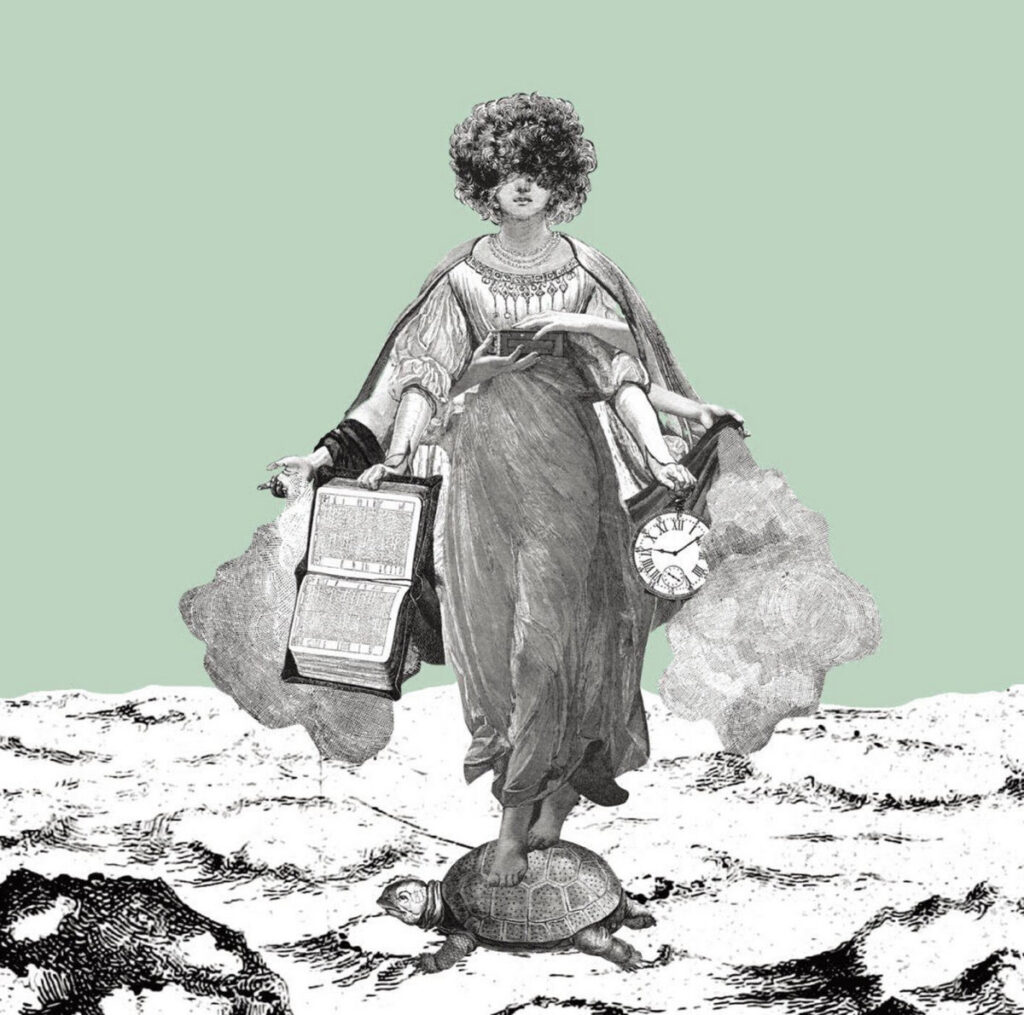 There’s something unsettling to the constant churn of Ms. Machine’s eponymous first album, like staring out a window as bad weather settles in overhead. The trio bridge the dank rock-centric clubs of western Tokyo neighborhood Koenji with weirder sonic laboratories in the capital like Forestlimit, adding electronic disorientation to rock emphasizing repetition to get a hard stare across. Phrases become hypnotic, hiding heavier emotions (‘I sent you message / the night I lost hope’ goes part of ‘Var’) or revealing knotty paths (‘Lapin Kulta’s’ skittering pace and klaxon-marked backdrop leads to seemingly innocuous lines like ‘I want orange t-shirts,’ before dropping a bit about ‘does it make sense to you / have you ever listened to our 2nd ep?’ which is the type of myth building I can support). A feminist viewpoint runs through all of Ms. Machine (one they are happy to point out, having appeared in documentaries on the subject) and it is strengthened by the sound, a heaviness allowing for some release (‘Nordlig Angel,’ pit-starting closer ‘Girls Don’t Cry, too’) but which most lurches ahead, unfazed and powerful. Here’s 2021’s first great album. Get it here, or listen above.

If you needed a crash course in everything happening in J-pop right now, turn to AiNA THE END’s debut album, along with its roll-out campaign. She dabbles in every contemporary trend, to the point she’s hanging out with Shin Sakiura and wading into the animated-video-supported world of YOASOBI and Yorushika. As a snapshot of Japan’s music industry, THE END beats any Billboard article. As a first album from a hyped up performer, it’s disjointed, largely because it’s 46 minutes of a young artist trying to figure out what she actually wants to be. It’s a fitting session with all sounds available for her to try, if she’d like.

I’m not sure if it’s the way to go in the future, but ‘NaNa’ is the standout of her first full-length, largely thanks to her commitment to Sheena Ringo cosplay. For all the talk of figuring out who the next Utada or Hamasaki is, the hunt for the new Ringo has been going on even longer, and AiNA THE END figured the best way to move ahead in the pecking order was to recruit Ringo’s go-to producer Seiji Kameda to work his magic. And it works, to the point where I wonder if Ringo herself should be asking Kameda like… can you spruce up my last couple of albums. The imitation is obvious, but done so well. Listen above.

An act that has proven to be way ahead of their time, even though they burned out before they could really get a chance to soak in the spotlight? Paellas, who took the ‘yay young in the city!’ sound of ‘new city pop’ and made it miss last train home. They broke up shortly after signing with Universal Music Japan, but they predicted a greater shift to lyrical melancholy (turned into super hits by YOASOBI and, recently, Ado) while also highlighting new approaches to funk-pop. Tokyo’s Mime would have to enter this discussion thanks to six-degrees-of-Paellas (band mastermind TiMT also plays in the group Pearl Center, the project Paellas’ lead singer Tatsuya Matsumoto founded after his old project ended) but new album Yin Yang offers some of the best diet-Paellas music to come out lately. ‘Headlight’ isn’t that one’s best moment, but it is a great snapshot of how Paellas sound has carried on, and is still being nudged into the spotlight. Listen above.

I’m less wowed by this song, a solid-enough pop number highlighting just how versatile chelmico are, and more intrigued by Avex pushing Thai singer/songwriter Stamp into the Japanese market. It’s an interesting little development in the reverse-import trend of global city pop love, with a Japanese label pushing an act heavily shaped by the sounds of the country’s Bubble Years… to the nation itself. A fun number, but a development to keep an eye on. Listen above.

Largely just charmed by seeing two netlabel bright spots from the back half of the 2010s (Gaburyu, responsible for a Vocaloid-centric banger of an album from Omoide Label among other works, and Nyankobrq, offering some of the better representations of what ‘kawaii’ electronic music could actually sound like) get to work with the official Hatsune Miku for a springy number offering summer 2017 feels. Bonus points for being about what all great Vocaloid songs are actually about, which is the process of using the software and the possibilities it provides. Listen above.

Want to impress your friends with your knowledge of developments in the Japanese music industry? Here are a trio of stories you should be up on, and which will help you sound like an insider at your next J-pop themed Zoom hangout.

Tuning Out: Five years ago, Kanagawa funk-rock group Suchmos helped change the course of Japanese music. Their song ‘Stay Tune’ and its accompanying music video (below) proved a slow-burning viral hit at the very start of 2016, a time when the country’s pop industry was still leaning towards old models centered around CDs and ‘short version’ uploads. Suchmos didn’t reverse it all at once, but they were out in front, and over the next two years everything shifted towards digital.

The group announced they were going on hiatus earlier in February, though their impact will carry on much longer. Besides predicting the direction Japanese music distribution would go, they helped kicked off the domestic boom in ‘new city pop,’ a somewhat misleading term seeing as Suchmos themselves were inspired by Curtis Mayfield, Jamiroquai, and (talk about timing) Daft Punk’s Random Access Memories. They set the pace for a sort of laid-back, jazz-dappled funk sound celebrating youth in the city that’s still going strong today.

Lose One, Grow Stronger: Eimi Naruse graduated from Dempagumi.inc, one of the wildest and most influential idol groups of the last decade. Never fear fans because they replaced her with five new members. That’s one way to keep the magic going.

Canon Building: Japanese publication Music Magazine put out a list of their ‘100 best albums of the 2010s’ in late February and… it is a great chance to start getting serious at assessing the defining Japanese music of the recent past!

As the cover implies, artists such as Cornelius, Yuta Orisaka, and Hitomitoi land pretty high up, as do creators such as Hakushi Hasegawa, cero, and KOHH among others. Really, it is a great springboard to a greater discussion… what were the best Japanese albums of the 2010s? Get out there and start debating.

If you want to get music highlights, interviews, and analyzes of Japanese music right in your inbox, sign up for Make Believe Mailer here.