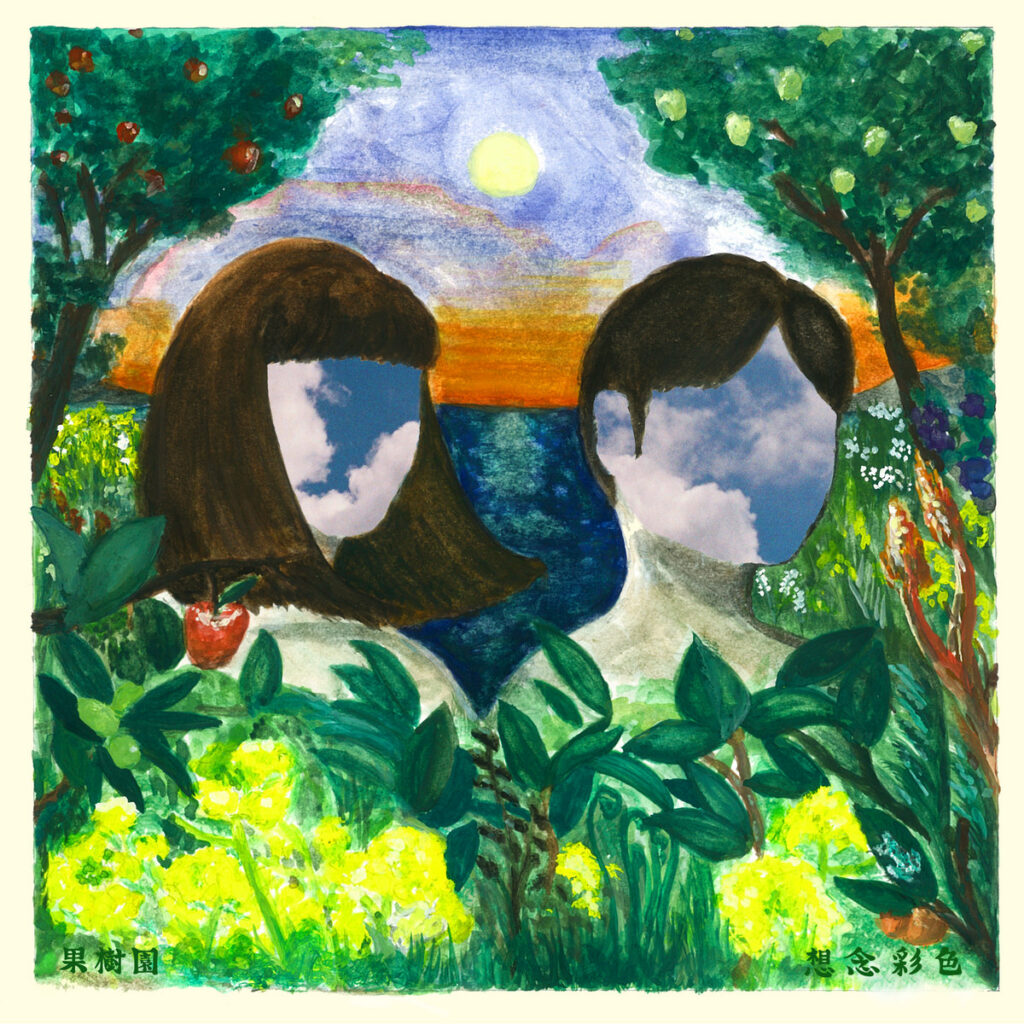 With the weather finally getting nice, now is the time to find a spacious park and just sprawl out, soaking in the warmth. Here’s the perfect soundtrack for your next zone-out while surrounded by nature. Korean artist Mellow Blush and Japan’s Meow come together as Kajuen, and on their debut they create easy-breezy folk numbers to get lost in.

The more attention paid, the better, because the duo work all kinds of great sonic details beneath their vocals, turning the solitary spring meditation of ‘Ni No Jikan’ (all about being lonely in the spring) into a flight of fancy featuring marching percussion and woodwind melodies. The title track hop-scotches between three languages, transforming a bossa bounce into afternoon psych and then pastoral rap, while even a more meditative piece like ‘Soen’ plays all kinds of sonic tricks to up the drama.

The bedroom recording vibe coupled with surreal touches makes this a natural for fans of Korean modern-psych project Mid-Air Thief, especially those who want to stare at the blue sky from a hammock or a patch of grass.

Get it here, or listen above.

The sequel to ‘Easy Breezy‘ arrives via Japan’s premier idol rappers. ‘Fantasy’ was written and produced by Ryo Takahashi, who shaped chelmico’s biggest moment, and chelmico’s own Rachel, who also handles the lyrics here. This one’s more scatterbrained than ‘Easy Breezy,’ but that’s pure praise, as this one spills from straight-ahead rap to club stomp to late-night raver, everything clicking just right, so all of these ideas never overwhelm.

A little reverence for the age of techno-pop paired with a healthy dose of irony. Pop project CRYSTAL have struck this balance well over the course of their career, and continue this tightrope walk above a pit of cynicism with ‘Refraction Overdrive.’ A nice reminder that, for all of the neon-soaked vibes ‘80s Japanese pop inspires in digital natives around the world, it’s something to have some fun with and goof on just a little back in Japan.

All the hook you need is ‘three underrated artists who make upbeat, hooky pop get together to… make upbeat, hooky pop.’ Hallkarimaako brings Hallca (former leader of Especia and recent solo act), Seira Kariya (electro-pop goodness and tofubeats collaborator) and AmamiyaMaako (dance-pop creator) to highlight each of their strengths.

Debut EP TERMINAL gives the members a chance to show off their songwriting chops thanks to the closing run of songs, while also allowing the other two to play in their sonic sandbox. The highlights, though, come with the all-united opening of the title track and ‘Glitter,’ which channel all of the trio’s strongest elements (skippy paces! retro-tinged instrumentation! slightly disorienting touches) and refashions them into something they all can use to create uplift.

Listen above, or see the video for ‘TERMINAL’ below.

Turning 30 is a big milestone, but doesn’t have to be an endpoint (though, bias, I’m 33 so…). Rapper and Zoomgal valknee embraces her latest birthday over a distorted ice cream truck jingle, celebrating while also rejecting the norms Japanese society tends to push on women who reach this stage in life (‘I can’t cook / I can’t clean’).

Want to impress your friends with your knowledge of developments in the Japanese music industry? Here are a trio of stories you should be up on, and which will help you sound like an insider at a socially distanced hanami.

Digital Up, Physical Down: Japan… land of fax machines, phone booths and CDs, am I right?! Not so fast, especially when it comes to that last one. The Recording Industry Association of Japan reported that streaming revenue grew 25 percent last year, while physical went down 15 percent (reported in Billboard). This lead to an overall decrease in revenue for 2020, so still important, but a shift is truly underway in how Japanese consumers listen to music.

Ironically, this development comes at a time when the rest of the world starts wondering ‘wait…is streaming really the right path?’ The case of hundreds of K-pop songs vanishing from Spotify briefly prompted many to wonder if they could really trust digital platforms, while even Tower Records is trying to come back in the American market. Japan… predicting everything.

Independence Is the Goal: A trend playing out in the greater Japanese entertainment landscape over the last year has been more artists and talents opting to leave major talent agencies and companies in favor of going independent. The latest case comes from rock band ONE OK ROCK who, along with actors Takeru Sato and Ryunosuke Kamiki, are leaving major player Amuse to start their own agency. While it isn’t a dramatic split (Amuse are investing in this new effort) it still highlights a growing urge from entertainers themselves to have more control over their careers.

Fest Season Approaches (Maybe): The COVID-19 pandemic nearly wrecked the entire Japanese festival industry in 2020, and heading into 2021 a ton of question marks surround this corner of live music. This week, seven of the biggest festivals in the nation formed a consortium to develop a safe way of holding large gatherings while the pandemic carries on (and Japan’s vaccine rollout for the general public is still months away). One of the participants, the Arabaki Rock Fest, goes down at the end of April, so we will see just how they adjust very soon.