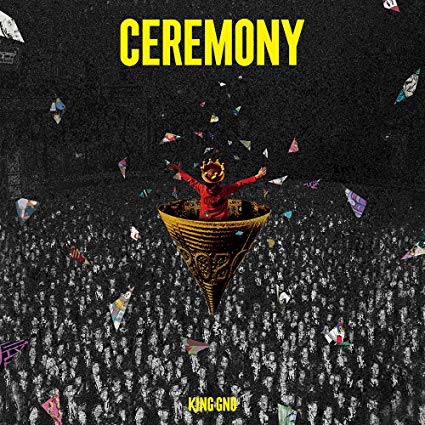 Lots of great Japanese music comes out every week, but keeping track of it all is a tough task. The folks at OTAQUEST want to help. In this series, we’ll cover new Japanese music highlights from various areas of the industry over the past seven days worth your time. This week: a band on the rise releases their most highly anticipated album yet, a pair of producers add a little bit of rock to a familiar electronic sound, and a virtual YouTuber making the shift to music.

How do you possibly deliver on a year’s worth of hype? Rock band King Gnu nabbed one of 2019’s biggest hits with “Hakujitsu,” a song that gained all kinds of momentum from YouTube and subscription streaming services before crossing over into what you could call the “traditional mainstream,” peaking with a much ballyhooed performance at NHK’s Kohaku Uta Gassen. Ceremony caps off this run with an album reminding that what helped them reach this point in the first place was a diversity of tastes resulting in a rock sound frequently colliding with a lot of other genres. The straight-ahead cuts are no-nonsense occasions — ”Teenager Forever” squirts in some hormone-powered energy, and “Hakujitsu” appears as their signature moment — but throughout they also dabble in jazzy interludes, turntabelism, ballads (which do end up being their weak spot…they thrive on energy, not slowing it down) and much more. That they fit it all within 36 minutes and make it feel much more grand is even more of an accomplishment. Listen above.

It’s funny how one simple change to a familiar formula lends music a fresh feeling. Duo Neko Hacker makes maximalist music loaded up with playroom-worthy sounds — call it “kawaii bass” if you’d like, a name like Neko Hacker really invites it — yet they also muscle in a lot of rock elements to make it stand out from the rest of the pack. This self-titled collection finds them working with a wide variety of chipper singers to create busy dance-pop songs bolstered by some sweet riffin’ which gives these tunes a little bit more energy. Opener “From Zero” finds featured vocalist Rika delivering confection-sweet words alongside some heavy stringing. Guitar solos abound across the whole album, and this small change makes a massive difference. Get it here, or listen above.

One of the risks the type of hyper-busy and uptempo electronic music Tao Yomomiji creates on this EP is that it could easily sound like a lot of other caffeinated dance tracks coming out of the Japanese music community. This one isn’t far off from Neko Hacker…but that duo is aware that by weaving in rock elements, they can avoid that sameness. Yomomiji goes another way. Rather than try to flip the script, they simply just make such a joyful and kinetic pair of songs that any worries about overthinking this go away with the first rush of samples. Get it here, or listen above.

Trekkie Trax cornerstone Carpainter is capable of a lot of zig-zags. After exploring a jet-fueled take on U.K. garage and Japanese house last year, SUPER DANCE TOOLS Vol. 1 finds him crafting 17 techno slow-burners out of his usual sonic palette, revealing new perspectives on familiar Carpainter sounds (“Supernova”) while also seeing him venture into entirely new territory (the squiggly bliss-out of “Acid Spray,” and the minimalist groover “B-Reverse”). Get it here, or listen above.

The sounds OOIOO are able to draw out of a traditional band line-up on nijimusi really remind how many groups are just phoning it in when they’ve got two guitars, a bass and a drum kit. Following a six year hiatus, this project helmed by YoshimiO of Boredoms mixed up their DNA a bit for this return album, turning back to a familiar ensemble set-up. Yet from this quartet approach they conjure up some wild noise, such as the burst of electricity ripping through “jibun” and the channel-skipping yelps popping up late on the slinky “tisou.” It all peaks with the 11-plus-minute psych out “walk for ‘345’ minutes, while saying ‘Ah Yeah!’ with a ‘Mountain Book’ in one hand, until a shower of light pours down.” I mean, the title alone should grab your attention, but wait until you actually get into the thick of it. Get it here, or listen above.

I’m not completely convinced on the whole virtual YouTuber scene, and remain pretty personally skeptical of how many of them seem to harbor musical ambitions. Credit where credit is due though — Kaguya Luna at least knows the importance of standing out from this rapidly crowding field. Kizuna AI already has the electro-pop corner staked out, so Luna places herself in a more traditional rock mold, complete with Ramones-indebted “hi hi let’s go” chants at one point. She dabbles in a lot of types of rock, including some heavier vibes and, on album highlight “Dance With Cinderella!” getting just a touch more optimal for the dancefloor (and revealing one of the best spots for her vocal delivery to shine). Where this virtual YouTuber goes I don’t know, but this at least hints that it could become something that’s not just digi cookie cutter. Listen above.

Kalen Anzai Gets a Boost From Carpainter on Latest Single