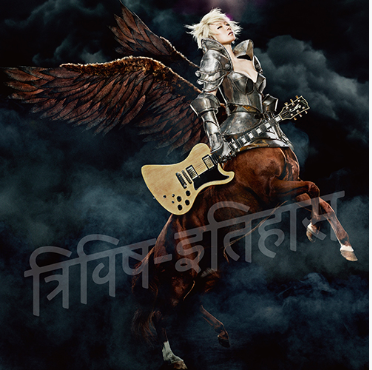 Lots of great Japanese music comes out every week, but keeping track of it all is a tough task. The folks at Otaquest want to help. In this new series, we’ll cover new Japanese music highlights from various areas of the industry over the past seven days worth your time. This week: J-pop with a theatrical bend, wonky R&B, and experimental funk jams.

Sheena Ringo’s youth smashes into her more recent output on Sandokushi. The sixth full-length album from the J-pop heavyweight mostly splits the difference between jazz-indebted stage numbers begging for Broadway production and rock numbers nodding to her early days in the late 1990s. Her most interesting moments come when she heads off into more unknown territory for her, such as on an opening number mixing chanting with marching band music with a deluge of Auto-tuned singing. Listen above.

The debut album from artist SIRUP offers a couple of different entry points into his world. Folks not fond of experimentation and efforts to update R&B will be happy to find an artist offering up a pretty smooth set of tunes nodding to the genre’s rich history, topped off by SIRUP’s sweet singing. Those who like digging into the music itself will find a lot of great backdrops full of modern electronic twists, from the warped vocal samples of “Evergreen” to the synth flurries of “Pool.” Meanwhile, those people who just want sticky-as-heck hooks get it in songs like the sun-grazed “Do Well.” Just dive in and…do what the title says. Listen above.

Over the past year, pioneering Japanese footwork label Kool Switch Works has been releasing compilations called delicious beats 4 sale​! This series purported to highlight ghettotech music coming out of the country, but in reality, it functions as a great crash course in the general underground dance community in recent months. They’ve now gathered all the tracks together in one biggie-sized package, and this set throws a bunch of fantastic music your way. Check The Offspring being mutated into rowdy club fare via PICNICWOMEN’s “give it to me,” or enjoy some confrontational experimental via Foodman’s “DAME OYAJI,” featuring a sample of what sounds like an old man on the verge of puking. Get it here, or listen above.

Funk remains the trendiest sound in modern Japanese music, with rock bands to rappers trying to incorporate elements bringing to mind the ‘80s into their sound. Singer/songwriter Kan Sano’s new album Ghost Notes heads down a similar path, but he mixes everything up to create one of the better mutations on this sound in recent memories. Sano weaves in a lot of attention-grabbing details into his songs, mostly related to the vocals. See the slight haze hovering around his own voice on “Baby on the Moon” or the chorus of squiggly voices rising up on “Stars in Your Eyes.” For all these twists, Sano still lays down some hip-moving grooves, reminding that oddballery only works when you can also deliver something catchy. Listen above.

Space wins the day on Oh Shu’s latest album. Big Fish allows a lot of space for the singer/songwriter to play around with, whether laying down mid-afternoon funk on “Tamurou” or cafe-ready acoustic meditations on “Come Come.” It also allows Oh Shu to add in atmospheric details giving his work more character — love the bug chirps and far-off kid voices ringing off on “Greenish.” Even bigger stabs at pop immediacy such as “Lucky” leave some room for stretching out. Listen above.

Sheena Ringo’s Discography – Far Too Eccentric to be Labeled

No Stress: Introduction To SIRUP, A Singer Personifying The Sound Of Japan In 2020