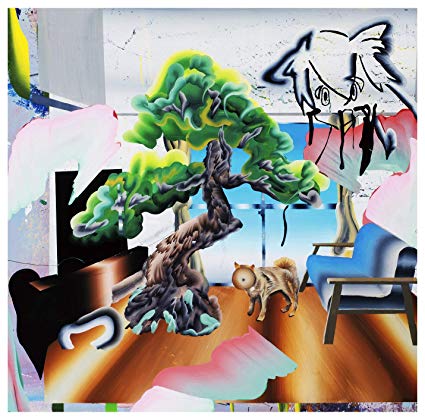 Lots of great Japanese music comes out every week, but keeping track of it all is a tough task. The folks at OTAQUEST want to help. In this series, we’ll cover new Japanese music highlights from various areas of the industry over the past seven days worth your time. This week: brain-melting piano tunes, forward-thinking dance music taking time to nod to the past, and downbeat R&B trying not to topple over.

The songs on Hakushi Hasegawa’s first full-length album offer up surprises practically every few seconds. Maybe what’s most unexpected about Ea Ni Ni is how the teenaged artist manages to remain so dizzying across these songs after showcasing his topsy-turvy approach to piano, jazz, dance and whatever other genre he’s feeling over the course of a few other releases in recent years. He has released via Maltine Records, where even he stood out for his rollercoaster approach to song. He shouldn’t be shocking anyone at this point. Yet here Hasegawa is, barreling out of the gate with a chipper number loaded up with horns and his own freewheeling voice, before just destroying any other expectations by dipping into jazzy drum ‘n’ bass, start-stop party ravers, and hyperspeed funk. Part of Hasegawa’s charm comes from the pure technical ability at play here, but that would mean nothing if he didn’t manage to make it all so unpredictable and fun. Imagine Squarepusher loosening up and deciding to throw a party with a keyboard as the centerpiece event. Few albums from 2019 offer as much joy packed into sudden twists and turns then this one. Listen above.

A vibe can be great, but wrapping a feeling in a great pop song is even better. Producer SNJO crafted a standout bit of fidgety electronic music on their first album for Local Visions, but they elevate everything to another level on Diamond. The melodies are tighter and the hooks digging themselves deeper into your head. The title track flips synthesizer wooze into an apt backdrop for a melancholy vocal, while “Time” crafts some digital-era funk featuring confident verses courtesy of Sola The Luva. The bulk of Diamond succeeds by shaping up, but SNJO still finds room to play around on inclusions such as “Cyber Attack,” a rippling number that lets its electronic edge hang out. Still, Diamond is worth your time thanks to how much more complete it sounds, and how it highlights the benefits of making everything work together towards a memorable center. Get it here, or listen above.

You can’t secure your legacy unless you take stock of your own inspirations. Tokyo future garage architect Carpainter has done a fantastic job so far in his career crafting his own rainbow-bright take on the dance sounds of yesteryear, but Future Legacy marks the clearest nod to yesteryear that they’ve made to date. Carpainter channels the sounds and spirit of techno in Japan during the 1990s, with tracks here letting the world see how the likes of Ken Ishii and Takkyu Ishino among others have trickled down into the DNA of a new generation of artists. Carpainter still adds in plenty of his own flair — and pushes forward on “O.V.E.R,” a charged-up blast of pleasure featuring vocals from Utae, the first time that a female singer has popped up on one of his solo tracks — but he’s also taking time to honor the past. This attention to yesteryear pushes this one up even further, and stands as a highlight in the Trekkie Trax discography. Get it here, or listen above.

Nearly every second of singer/songwriter Friday Night Plans Complex EP sounds close to collapse. “Drank a little too much/tongue is numb” is how the whole release opens, and from there it’s a series of electronic-soaked numbers staggering around like its an hour after last call. The songs here finds Friday Night Plans’ voice coated in digital distortion — ”Nameless” plays out behind a thick layer of Auto-tune, while “All The Dots” spends half of its playtime completely submerged in that technology — and this gives the whole EP an especially ennui-ridden feeling that, coupled with tumbling beats, also feels apt for late nights out. Yet this is nowhere near a hot mess, as Friday Night Plans approaches this all with a theatrical flair and ear for detail that reveal this is far more intricate than one initially thinks. Listen above.

Alright, this week’s list has been a little bit too electronic focused so far. Thankfully, whip-smart rocker Rei put out a new step of swaggering numbers to fill that void. Seven highlights the singer/songwriters fondness for dusty riffs and clever lyrics that add a little bit of subversion to the usual rock format. This one features some slight detours into jazz on the semi-meta “Dance Dance” and creates pure atmosphere on “Tourbillon,” but she sticks closely to the riff-centered sound that has made her one of the more intriguing voices out of Japan this decade. Listen above.

Nagoya project Memoryhook makes melancholy indie-pop, but they’ve never sounded as glum as they do on the heavy Childhood. The three songs here unfold at a slower pace than the uptempo speed of prior releases, complete with more downtrodden lyrics. It’s not a breezy listen, but hey not every album has to boost your spirits. Get it here, or listen above.

Kalen Anzai Gets a Boost From Carpainter on Latest Single