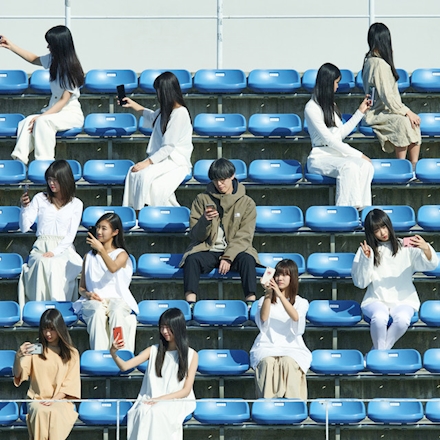 Lots of great Japanese music comes out every week, but keeping track of it all is a tough task. The folks at OTAQUEST want to help. In this series, we’ll cover new Japanese music highlights from various areas of the industry over the past seven days worth your time (though this time expect some from the holiday break too). This week: a kawaii dance creator showing how far-reaching his sound can be, an idol dabbling in a little bit of everything, and an idol group corralling a bunch of the 2010s most talented dance producers.

The entire playroom-pop sound palette could be the sort of approach that gets an artist pigeonholed, but Tomggg uses his new EP as a way to kick back against anyone hoping to pin him as just the “kawaii sounding electronic producer.” Unbalance spends its first two songs jetsetting across Asia, with the Tokyo-based creator getting Thai MC Lil Ice and Malaysian rapper Airliftz to rhyme over his beats, revealing how his plinky-plonky backdrops can be transformed into something suitable for hip-hop. “Sweet Salt” featuring Japan’s pinoko is the closest Tomggg comes here to making all those cuddly expectations come true, but following number “Girl” finds Izumi Makura delivering her sing-speak rapping over a delicate beat constructed out of instruments you’d find in a junior high school band room. The building blocks are familiar, but on Unbalance he shows how they don’t have to be confined to one style. Listen above.

When I dug into this album earlier in the week, it was half earnest evaluation of both content and something approaching a personal therapy session. Simply looking at the tracklist gives me this weird feeling, like I’ve accidentally eaten hand soap and I’m hallucinating this alternate dimension where a guy from SMAP decides “yeah, let me call up yahyel and WONK to work on some tunes, that’s totally in character.” Yet I’ve shunned the pastel-colored stuff near my sink, and this is really happening, on Earth, in 2020! Even more surprising is that the end result is pretty darn good. Get past the songs featuring the old guard which run from mediocre to “Kishidan, stop,” and you get Katori shining a light on emerging young talent within the world of J-pop. It’s not sonic appropriation, but rather curation guiding this one along. Listen above.

Keitaro Ujiie keeps his musical projects separated well. While the piano delicacies and electro-pop bops go to Snail’s House, his Ujico moniker gives him room to play around with heavier electronic sounds and traditional Japanese instrumentation. The tracks popping up on Ayakashi blend those two sides together well, generating tension without sacrificing any of the energy pulsing through them. It’s strong enough without any additional commentary — when he goes full slow-burn on a song, it really soars — but taken within Ujiie’s greater catalog it reveals how skilled he is as a creator. Read our original post here, listen above, or get it here.

“Idol” is one of those tricky titles that, in most cases, the artist themselves have to bestow on themselves. Chiaki Mayumura is an idol that doesn’t sound like an idol…except idol isn’t really a sound, so why not? She’s been active for most of the 2010s, and one of her best talents is being able to try on different musical identities without losing her character in the process. Newest album Gekidan Ogyarhythm continues this tradition, finding her creating lazy-day synth-pop, untethered folk pop and slinky disco-pop riffing on the aggressiveness of grandmas (no, really). Listen above.

The debut album from dance-music-embracing idol outfit CY8ER doubles as a celebration of some of the 2010s most intriguing electronic producers. The marquee name here — and the only guy getting a “featured” tag — is Yasutaka Nakata, who acts as kind of a godfather to much of this community. Yet the highlights across Tokyo come from younger names (so…this is kind of similar to that Shingo Katori album from above), highlighted by the constant rev-up-and-go of Pa’s Lam System’s “Yumezora Kokoro,” Masayoshi Iimori’s stuttering “The Next Door,” which gives us some nice bloghouse nostalgia, and Moe Shop’s French-touched “Moshi Moshi Nippon.” There’s an entire discussion to be had about how CY8ER’s entire aesthetic is “do you remember netlabels,” which presents pros and cons (great music, but tough to develop an identity that couldn’t be cobbled together from the Maltine Records’ releases page), but as a listening experience, this is a lot of talent gathered in one place. Listen above.

For those seeking out left-of-center indie-pop delivered by a vocalist who could sometimes sound like a Muppet, Boy’s Age were one of the 2010s best Japanese bands. One half of the project has also been creating music under a solo guise for a while now, and it nails the woozy, how-many-of-these-did-I-drink vibe just as well. Black Opal’s Babylon Disco is a set seemingly always a few seconds away from tumbling over into a gutter, each track here using a variety of synthesizer melodies and beats to create jaunty numbers wrapped in a haze. The big revelation here — just how fun this project could get, especially when you get to the absurd bounce of “Dinner.” Get it here, or listen above.