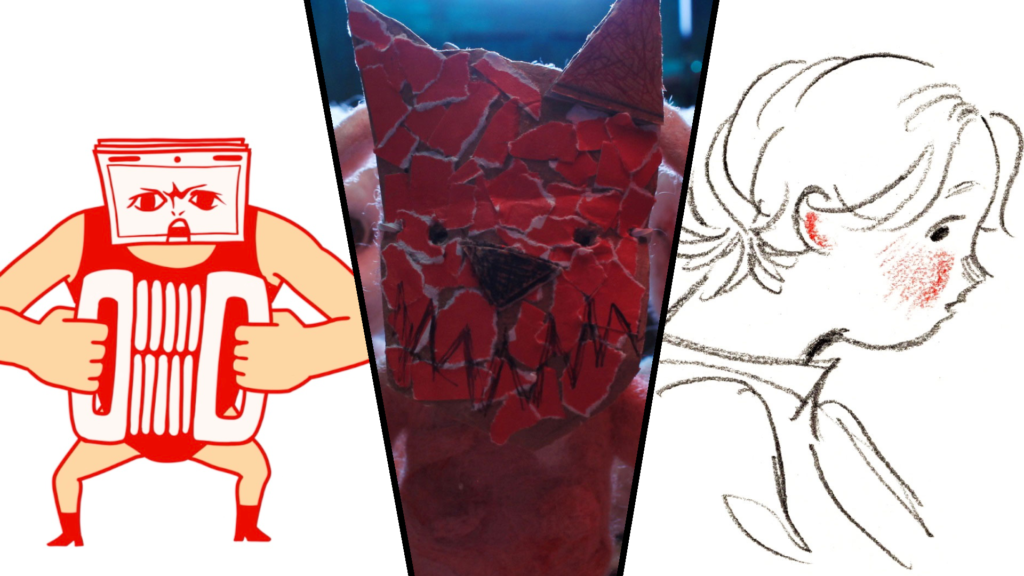 Annecy Film Festival 2021 was the first opportunity for animators and fans to gather in Annecy, France for the yearly festival in two years, following last year’s online-only rendition of the event. The hybrid nature of this event provided the opportunity for many things traditionally only showcased in person, including the huge array of short films, to be offered an online showcase for audiences around the world who couldn’t necessarily make it to France because of COVID-19.

One such showcase was the Expanded Animation block, an hour of Japanese short films ran by the Japan Media Arts Festival that aimed to showcase the potential of Japanese animation beyond the assumptions many have of what the industry is capable of. It’s the reason why On-Gaku was highlighted with an extensive panel chronicling its development. While some of these showcases are anime that simply go beyond the work of their peers (one of the chosen showcases was the first episode of Keep Your Hands Off the Eizouken), several independent animation works were also shown to the public.

Battles are an American experimental rock group that has been creating music for almost two decades. In November 2020, the group asked animation collective AC-bu to direct a music video for them. The result was Sugarfoot featuring Jon Anderson and Prairie WWWW, and as a group of animators known for working on some of the more outlandish segments of Pop Team Epic, the results are fittingly bizarre.

The video depicts the ‘Great Space Robot Festival’ that takes place as a way to avenge the events and music festivals canceled by COVID-19, in the hope that it can bring people together. In reality, that means you have Japanese castles galloping like horses, Torii gates marching around, all perfectly in tune with the music. The video is parodying tokusatsu and mecha tropes to create a spectacle and blends 2D and CG animation that aims to elicit the magic that in-person events can bring.

It’s an engaging video, one that’s a joy to watch thanks to its impressive and bold animation style that captures the AC-bu style while deviating into something new and in tune with the music. If you couldn’t catch it at Annecy Film Festival, it’s also available for free on YouTube.

The Mark of Emi 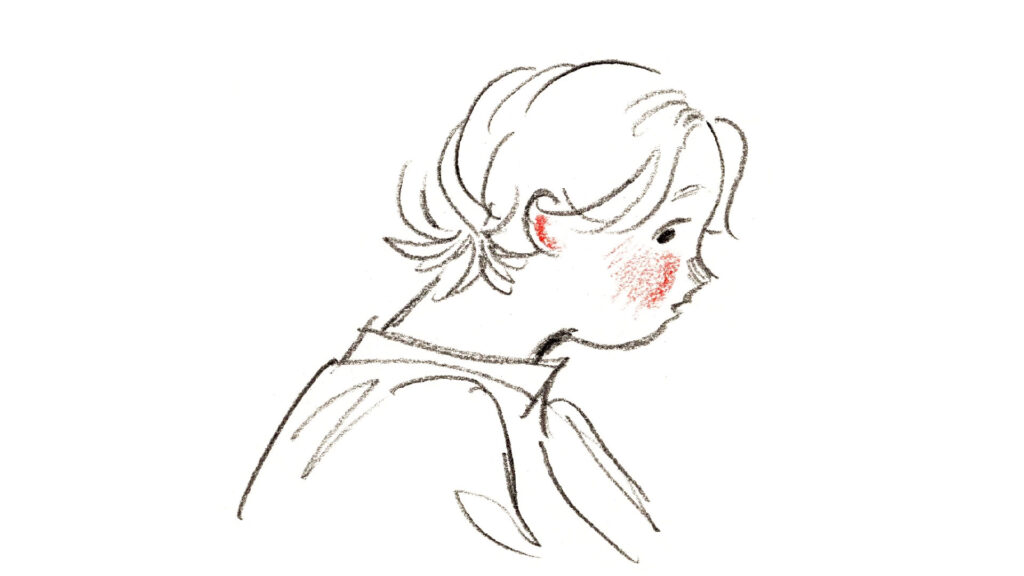 The Mark of Emi from Momoka Furukawahara, alongside screening in the Extended Animation block, was also screened as one of the Graduation Short Films in Competition at this year’s event (the award eventually went to Zehao Li’s Hippocampe). Watching the short, you can understand why.

This is a tender short film about a girl’s first experience of same-sex attraction to another person and the difficulties of understanding these feelings against a backdrop of self-confidence issues and the stigma she felt from society. Discussing the short for its inclusion in the competition lineup, Furukawahara mentioned that she wanted to create a piece that would ‘make people feel sexy’ and was based on her own experiences of adolescence.

The vague feeling of love and intense interest that she feels towards Emi, and was drawn entirely on small 10cm x 10cm pieces of paper that capture these fleeting memories and the intensity of these emotions, even minor ones. This technique came from the director’s tendency to scribble on the edges of pieces of paper and in margins. The result is a rather beautiful short film told simplistically with a rough texture that matches the coarse nature of self-discovery that sticks with you long after the film has finished. 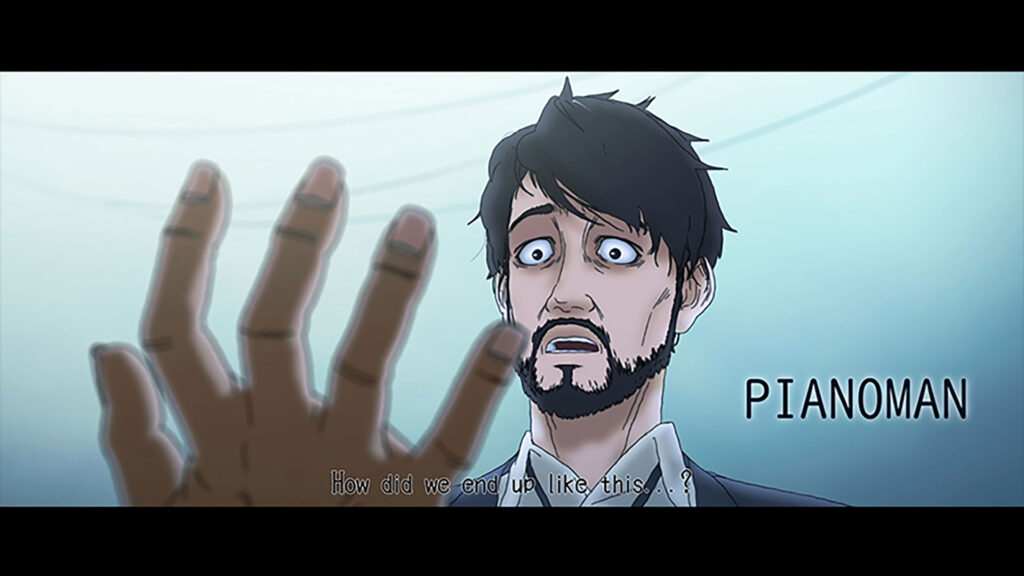 Pianoman is a distinct and unusual animated short film emphasizing visual and emotional appeal over a necessarily sensible and easy-to-follow story. The resulting film, following constant refinement, took over three years to create but was arguably worth the wait.

Without memories or even a place to go, the unnamed protagonist finds himself in a blank void, with the only things near to him being a bunch of instruments alongside a dilapidated church and a door. The door won’t open no matter what, but it doesn’t take him long to fully immerse into the music, becoming a devil-like creature as he plays the piano and all the instruments around him. The door opens from the performance, but he trips and falls, forgetting his memories as the door closes, repeating the cycle.

It’s an example of how animation can drive a piece of animation and transform it into an engaging experience even when other fundamental elements like a story are nowhere to be seen. You won’t get much from the film there, but the rest of it is engaging enough that you perhaps don’t care. Arguably, it’s better for that.

The final short film I wish to highlight has more name recognition than the rest because of the person in charge of directing it, and is even a film we’ve discussed here at OTAQUEST before.

With a content warning for the film’s exploration of child physical and sexual abuse through the metaphor of a family of goats and a threatening wolf, My Little Goat is an award-winning stop-motion short film from the director of Pui Pui Molcar, Tomoki Misato. Having all been attacked and scarred by the attack of a wolf, the mother of the goats saves and vows to protect them. They’re safe in their home now that he’s gone, and understand this to the point of helping a human boy hide within their home when another wolf gives chase and threatens to hurt him.

While it certainly makes for a difficult viewing experience, the blend of metaphor and storytelling results in a powerful short film that captures the emotional scars that abuse leaves long after the person who hurt you has gone. Away from the story, you can see the hallmarks that would propel Misato to success with Molcar in the stunning animation showcase on display, taking advantage of wool and fluff and various materials to bring this world to life.

Each short film ultimately serves to showcase how much Japanese animation has to offer beyond mainstream anime. Whether that be stop-motion, CG or a film developed in a style beyond what we’ve come to expect from anime, each of these films is a showcase of up-and-coming Japanese talent whose names are worth paying attention to in the future.