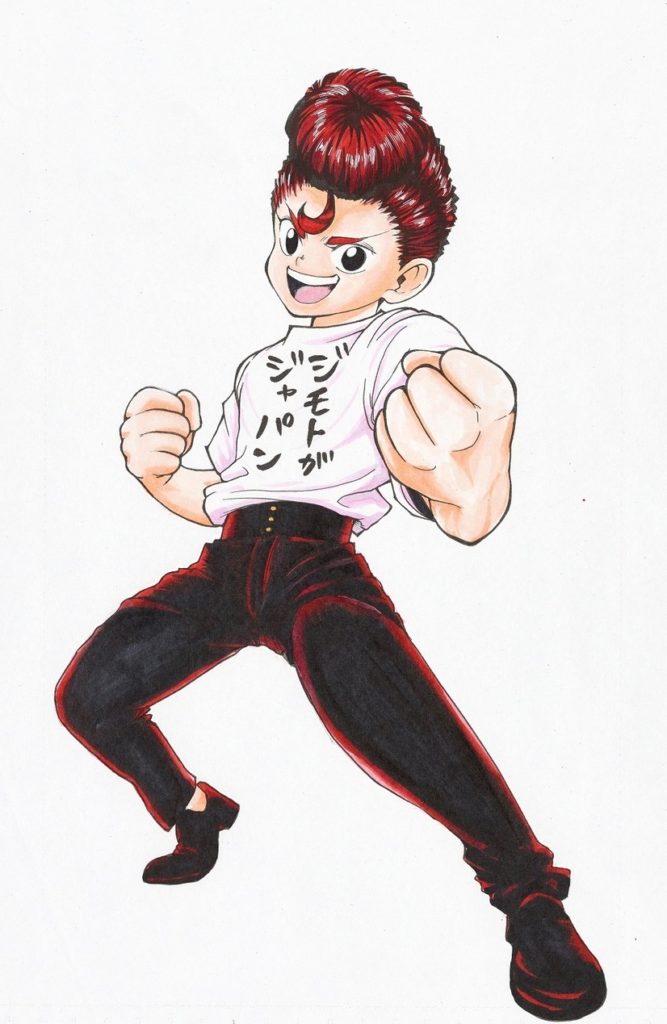 Weekly Shonen Jump’s annual celebration event “Jump Festa” is usually quite exciting – we get PVs and trailers for upcoming projects, fun events with mangaka and voice actors, and even some surprise announcements here and there. But I don’t think I’ve ever been as surprised as I was following the events of this year’s Jump Festa, as it was announced that the gag manga Jimoto ga Japan would be getting an anime adaptation.

The series, penned by Hayashi Seiji, follows the transfer student Tokio Abiko from Yamagata prefecture as he arrives in Tokyo and attempts to defend his beloved hometown from bullies. In doing so, he makes an unlikely friend called “Japan” who accepts everyone no matter where they’re from. The series follows the pair’s various oddball adventures, which often use different prefecture’s specialties and history as punchlines.

While gag manga getting adapted into an anime is nothing new, what is surprising about Jimoto ga Japan getting an anime is that it’s barely just started – with the announcement of anime coming before even its first volume is scheduled to release on January 4. This is surely the quickest anime announcement for a Jump series in the magazine’s long history and the reason why is still unclear.

We’ve had no word on whether the anime adaptation will be a full-length TV series, but doing so would surely leave the production team with very little to work with – the series’ current material of around 20 chapters could easily be covered in a couple of episodes, given how light they are in content. It’s probably safe to say that Jimoto ga Japan’s anime will follow in the footsteps of The Disastrous Life of Saiki K and take the form of some sort of ONA, perhaps with considerably shorter episode lengths.

Even so, this situation does remind me a little bit of the Detective Conan anime, which started only a year after the series’ debut and still continues to this day. In Conan’s case, this was because TMS Entertainment saw in it an effective storytelling model that they could easily rework to create anime-original or ‘filler’ episodes, as well as the fact that the show could be used target a younger audience – something which has worked very well in the long run.

In this sense, although the studio behind Jimoto ga Japan’s anime hasn’t been announced yet, I wouldn’t be surprised if there was a third party behind the project that sees considerable financial potential in an anime adaptation – perhaps a tourist agency or something similar. There’s hardly any information to go on, and the author of the series even said in his comment for the event that “The one who’s most surprised is me!” – so perhaps even he doesn’t quite understand.

Nevertheless, Jimoto ga Japan will be coming to the medium of TV in April 2019. I look forward to seeing what form it takes exactly, and what kind of reception it receives.