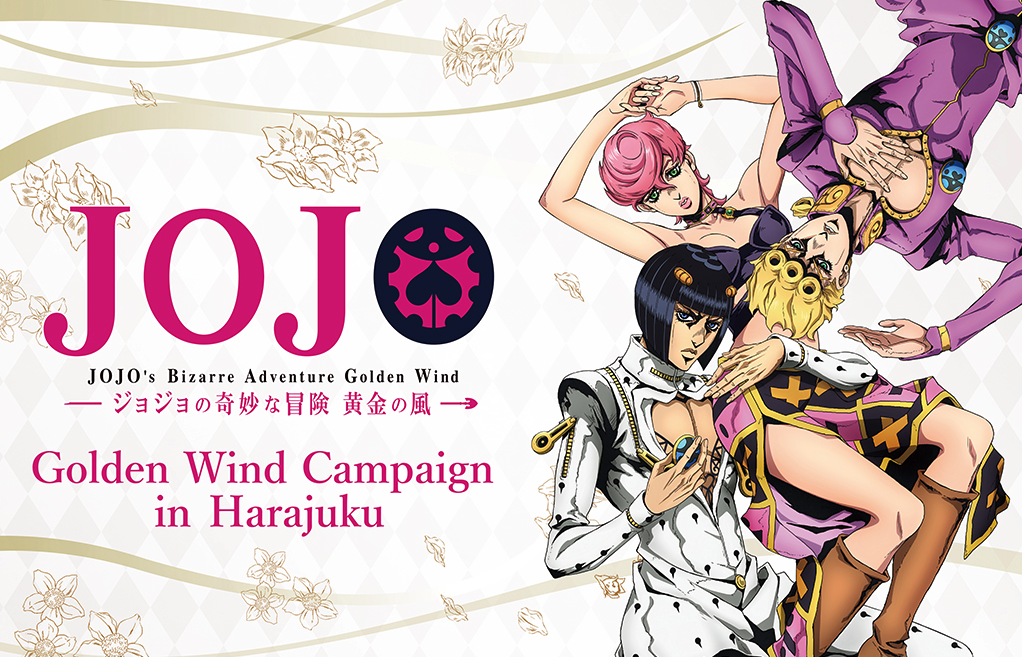 With Jojo’s Bizarre Adventure Part 5 anime adaptation now well underway, the promotion has reached a fever pitch. If you live in the Harajuku area of Tokyo however, you will soon be unable to escape the sight of the iconic character designs of the show. A multi-faceted ‘Golden Wind Campaign in Harajuku’ will be launched to celebrate Golden Week (one which is longer than normal thanks to the current Emperor’s abdication and the dawn of a new era in Japan) as well as the currently-airing JoJo’s Bizarre Adventure Golden Wind anime, with a special JoJo Cafe being the first of 6 events that are set to take place within this area of Tokyo over the next month.

The cafe will be hosted inside the SPINNS Cafe x Sweets Paradise in Harajuku from Friday, April 12th until Sunday, May 12th, and can be found just off the famous Takeshita Street shopping area. Described as a ‘must-see’ for JoJo fans, patrons to the cafe will be able to order from a special collaboration menu, the contents of which are yet to be officially confirmed to the public. Not only that, a range of exclusive novelties that are included with these meals will also be on offer. While the specifics of these items you can get with each meal are yet to be announced, we do know that those who attend the cafe will be able to take with them a paper lunch mat and an original cup coaster with every order. Finally, a range of exclusive merchandise will also be available to purchase inside the cafe.

It should be noted, for those who want to attend, that there will be a 300yen entry fee charge, and though you will have the chance of attending without a reservation, there is no guarantee of a seat and, considering the popularity of the series, I would recommend that those who want to go to the cafe reserve a seat in advance in order to ensure they can eat at this limited-time collaboration.

While I would need to know what food and goods were being offered to truly be able to recommend this, it does seem that this could be an exciting event for fans of the JoJo franchise. And hey, if the cafe doesn’t appeal to you, considering there are multiple unannounced components for this Harajuku event, I’m pretty sure something will be announced in the coming days and weeks that is more to your interest.

You can visit the hub page for this JoJo’s Bizarre Adventure Harajuku event here, and you can find more info specifically regarding the JoJo Cafe here.