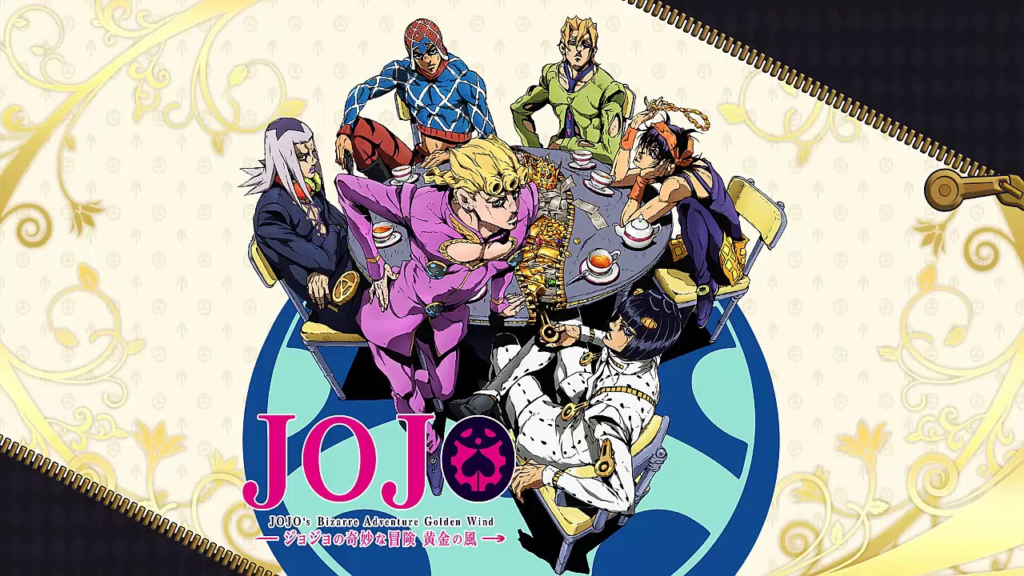 The Story of Giorno Giovanna

Anime arguably owes much of its proliferation in the west to the internet, and in recent years Jojo’s Bizarre Adventure has exploded to all corners of the internet.

Jojo’s Bizarre Adventure was originally released as a manga in 1986 by Hirohiko Araki, and was adapted into an anime in 2012. The wracked poses of the characters, eccentric stylizations, and general tongue-in-cheek sensibilities have attracted curious fans since. The original manga is divided into distinct arcs, and as such so is the anime. The current arc, Jojo’s Bizarre Adventure: Golden Wind, was released in 2018 and picks up where the previous arc, Diamond is Unbreakable, left off.

For those untouched by the internet’s enthusiasm for camp, Jojo’s Bizarre Adventure as a whole follows members of the Joestar bloodline. Each arc has their own Joestar protagonist, evidenced by their name that starts with some variant of “Jo-”.

For instance in the earliest arcs it follows Joseph Joestar, then later Jotaro, and eventually Josuke, and so on, thus the titular “Jojo”. Each arc has their own plot, and is more or less separate from the previous arcs. They each involve the protagonist gathering a group of allies, training in the use of their supernatural abilities–usually some variant of Stand–and gearing up to defeat whoever the Big Bad is for that particular arc.

Usually that villain is Dio Brando, the adopted brother of original protagonist Joseph Joestar, but in recent arcs there have been more variety.

The Stands are a constant presence throughout the series, somewhat of a calling card. Introduced in the Stardust Crusaders arc, Stands are typically understood to be a manifestation of life energy, usually humanoid in form and capable of various abilities. Some are incredibly powerful, some have a specific, situational ability, and incredibly varied.

According to the lore of the series, Stands are as varied as each human psyche, which allows for many different kinds. There are many in-universe laws and lores surrounding who can have them, what their abilities are, and how they can be improved, but usually Stands are there to fight their users’ battles and protect them from harm, usually from and against other stands and Stand users. 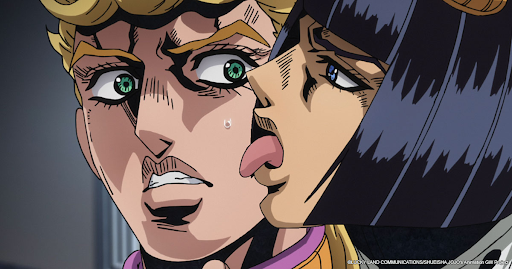 Golden Wind in particular takes place two years after the events of Diamond is Unbreakable and focuses mostly on Giorno Giovanna, a teenage delinquent living in Naples, Italy. Due to a series of appropriately bizarre events, Giorno is the son of Dio Brando, but also kind of the son of Jonathan Joestar. Regardless of the particulars of Giorno’s parentage, he’s an emerging Stand user, using his Golden Wind Stand to swindle tourists throughout Naples.

After somewhat accidentally killing a low-level gangster, he fights Bruno Bucciarati who happens to also be a Stand user. After defending himself he successfully convinces Bruno to let him into his gang, Passione. Rather than becoming strictly a criminal, Giorno plans to subvert the gang from the inside and make them a more positive force in Naples.

Obviously rogue gang members pose a bit of a problem for the gang’s enigmatic leader Diavolo, the split personality of another member of the gang, Vinegar Doppio. Thus the series focuses on Giorno and his growing crew as they rise through the ranks, outwit and defeat Passione’s enforcers, and ultimately defeat Diavolo. Throughout all of this they also have to contend with a special arrow with mysterious properties when it comes to Stands.

Giorno’s crew in this adventure consists of Bruno Bucciarati, the first member of Passione he wins to his side. Other members include ex-cop Leone Abbacchio, the gunslinging Guido Mista, youthful and naive Narancia Ghirga, and Pannacotta Fugo. Later in the series they’re joined by Trish Una, the daughter of the mysterious boss of Passione.

At one point in Golden Wind they’re tasked with being Trish’s bodyguard and bringing her to Diavolo, but in the course of this mission they discover that Diavolo is going to kill Trish. Diavolo has an obsessive need to protect the secrets of his history, and obviously his daughter is a major part of his history. Once Giorno, Bruno and the rest of their gang discover this plan, Trish joins their efforts to depose Diavolo and reform Passione.

Jojo’s Bizarre Adventure is known for achieving new levels of camp while providing fans with the intense fight scenes commonplace in most action anime. Golden Wind also takes viewers to the cities of Italy, not quite out of place in other arcs of Jojo, but certainly unique relative to other anime. It represents another action-packed, and fashion-defying chapter in the story of the Joestar family, and another exciting new litany of body poses.