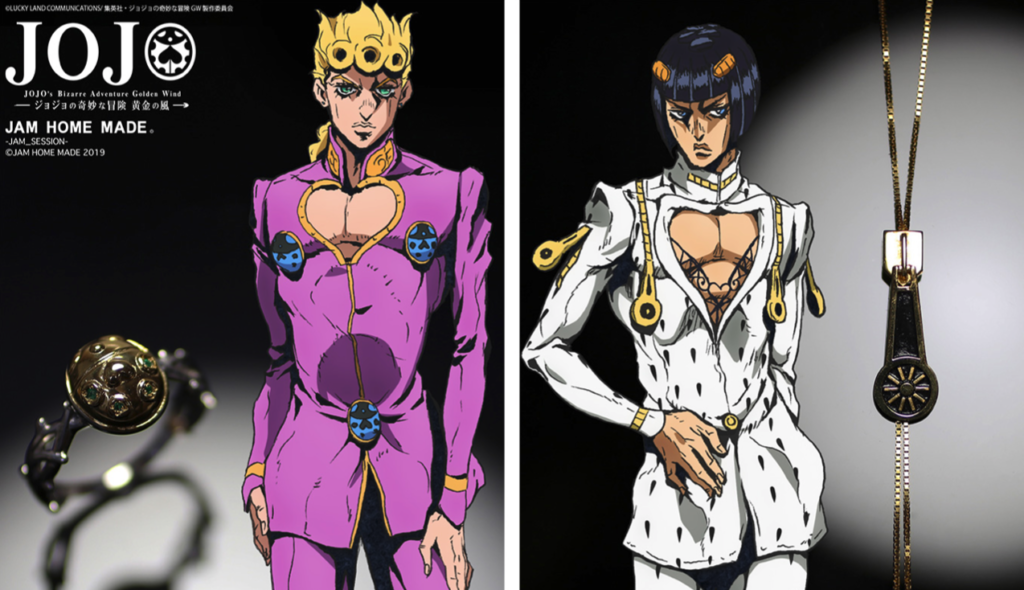 The JoJo’s Bizarre Adventure franchise has been incredibly busy with collaborations as of late. We have a collaboration café, an X-girl clothing collaboration, we have special crepes, and we have JoJo VANS. It just keeps coming, and you can’t complain that the series isn’t being promoted as well as it should be in the wake of the currently airing anime adaptation of Part 5 of the JoJo manga. Well, those promotions are expanding yet again, with news that a set of JoJo’s Bizarre Adventure jewelry is on the way from JAM HOME MADE.

JAM HOME MADE are well known for their jewelry as well as their other fashion accessories, and have worked on their own original designs as well as collaborating with major brands such as Disney and the Psycho-Pass franchise on unique and fashionable accessories. This new set of jewelry is all based on iconic designs and characters from the JoJo’s Bizarre Adventure franchise and is made from premium materials. This collaboration, unlike the others, isn’t just limited to part 5 of the anime, either, with other parts of the series being represented such as part 4.

Each of the items included in this collaboration holds a premium that would perhaps be expected for a company with a reputation such as JAM HOME MADE and for collaborative goods more broadly. The cheapest item will still set you back over 11,000 yen, which the most expensive see the price rise to over 20,000 yen, which certainly isn’t cheap by any stretch of the imagination. Saying that, these items look to be worth your while if you are a fan of the franchise, and if you are such a person with the money to spare that would allow you to afford such admittedly pretty and fashionable anime merchandise, all of these items are available to pre-order form the Premium Bandai Store.