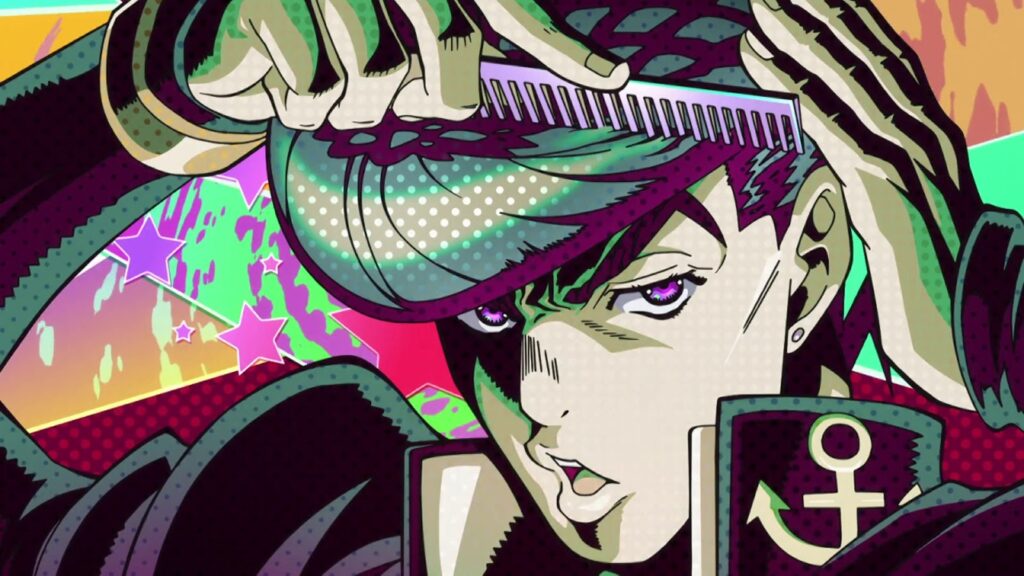 Hirohiko Araki’s iconic Jojo’s Bizarre Adventure series has always been popular in Japan. It would become known internationally in the 90s thanks to an OVA release of its most popular arc, Stardust Crusaders. Although it would spread to other media such as video games and even a lost film of sorts, the series would see an even larger influx of fans with the stellar anime tv series adaptation that began in 2012.

Handled by David Production, the anime has since become loved by newcomers and old fans alike for staying true to (and in some cases improving on) the source material. Add in the countless memes thanks to the unique situations of the series, and you have an anime that everyone has undoubtedly heard the praises for.

As the anime adaptation has covered the first five parts (out of an ongoing eight total) of the series, it can be more difficult to recommend the series as the episode count rises (it’s currently at 152 episodes).

Although the series is divided into different time periods and protagonists, with small but important connections in-between, some believe it’s okay to skip around and start with a part that people most like. The concept of each part following a different member of the Joestar family bloodline has lent some support for this idea.

I will put my two cents in and say that I absolutely do not advocate skipping around in the series. Each part is unique in its own way, and a lot of them form the building blocks for what follows them.

This timeline is meant to summarize the main plot of each part and give an idea of why fans love each one.

As popular as the series has become, it’s not surprising that there are so many options to experience it. There isn’t just option that appeals to everyone, but hopefully one of the following does something for you!

Phantom Blood – Vampires in the 1800s

Phantom Blood is the first entry in the Jojo’s Bizarre Adventure series. Although there are still ‘Jojo’ elements present, since the series would strive more with its further entries in terms of pacing and protagonists, it is sometimes advised to skip this part.

Personally, I think it’s still worth it. You can see where the series started and how certain elements connect to later parts. It’s still incredibly entertaining, and it’s covered within nine episodes of the first season, so it’s not too big of a time commitment.

The story begins in 19th century England and focuses on the proud Jonathan Joestar (nicknamed JoJo). His life is turned upside down with the introduction of his adopted brother, Dio Brando. A rivalry forms between the two as the latter tries to place himself in a position to overtake the Joestar fortune.

Dio’s lust for power drives him to place an ancient stone mask over his face, which turns him into an all-powerful vampire.

Jonathan learns how to use ‘Hamon’, which is a technique that focuses energy through breathing but also emulates sunlight that proves to be quite fatal to vampires. As Dio begins to amass his own following of vampires, Jonathan must wade through these new enemies to challenge the man he considers his own brother. 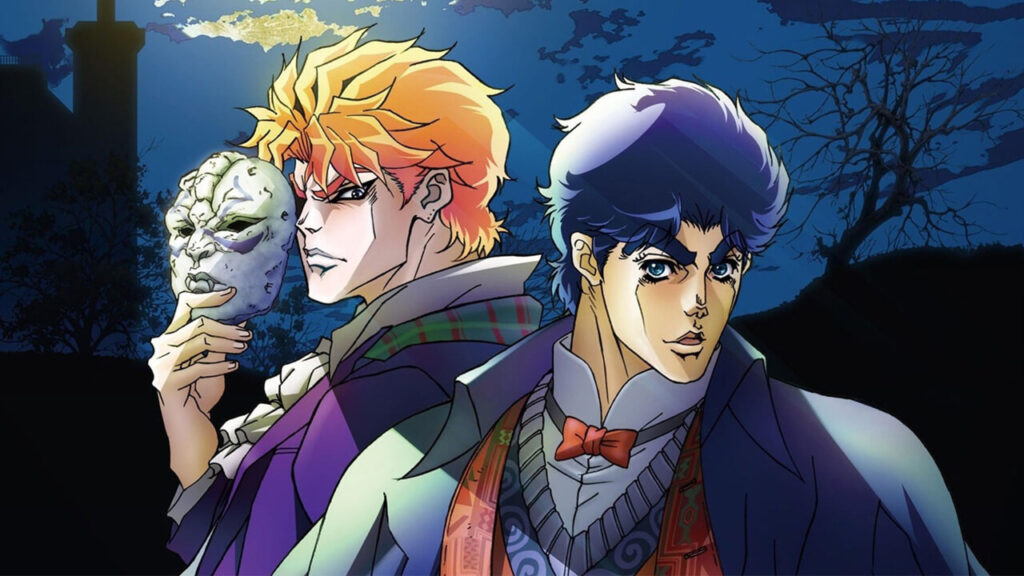 Battle Tendency – A Departure From the Previous Protagonist

The second entry in the series and a grand departure in both settings and characters. One of the biggest changes is the protagonist as Joseph is more comedic, sly, and cocky in comparison to Jonathan, who was more stoic and pure-hearted. It’s also with this part that the series finds more footing in the realm of comedy.

Not that the series doesn’t have any serious or heavy moments, but it’s when you begin to see the absurd hilarity that every part after includes.

This part follows Joseph Joestar, the grandson of Jonathan. Joseph is a far cry from his proud and honorable grandfather, willing to fight dirty and willing to run. Set in the late 1930s of America, Joseph finds himself entangled with a plot involving the resurrection of an ancient race known as the Pillar Men.

The Pillar Men plan to use the Red Stone of Aja with the stone masks they created to elevate themselves into ‘ultimate beings’.

The final episode of the Battle Tendency arc ends with a time skip to 1987. Joseph is shown to be much older and heading to Tokyo. It’s also shown that a coffin with the nameplate ‘DIO’ on it has been retrieved from the ocean. 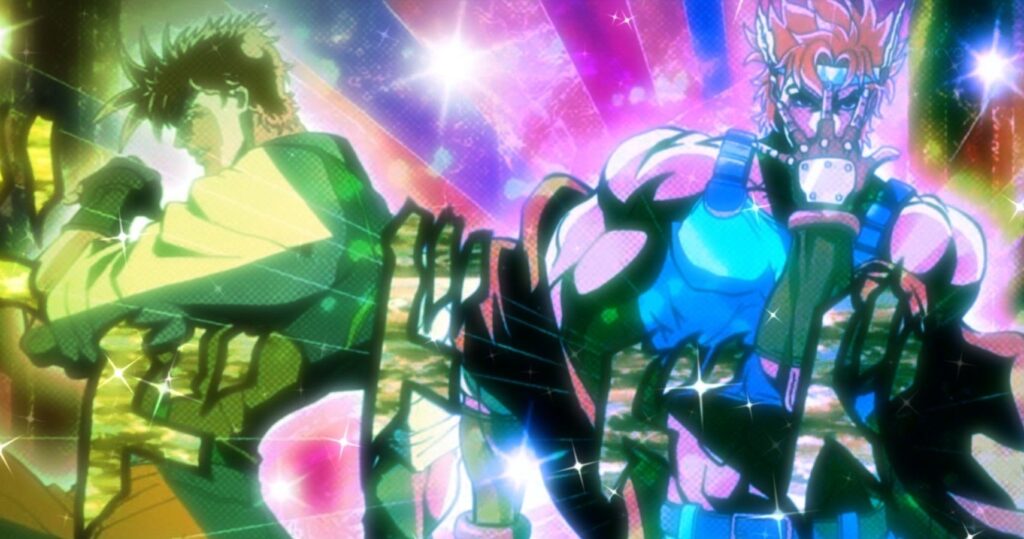 Stardust Crusaders represents the biggest change for the series. The concept of Hamon takes a backseat to the brand new concept of ‘Stands’, or spirits that fight alongside people. Although Joseph would still use Hamon at times, even he acquires a Stand and all the battles involve Stands.

While there are certainly some unique Stand abilities throughout, this arc is noted for some of them being pretty basic, as well as a monster-of-the-week format due to the number of enemies they face.

This part is also the only one to be split up into two separate seasons for the anime. The first season covers the group’s journey to Egypt and their battles against assassins hired by Dio. The second season begins with their arrival in Egypt and covers the final days of their journey as they fight through Dio’s henchmen in their attempt to locate him.

For this series, we’re brought to the 1980s and focus on Jotaro, the delinquent Japanese grandson of Joseph Joestar.

Although Jotaro Kujo is a rebellious teenager who’s more concerned with his Stand (who he initially believes is a curse), his attention is caught when he’s attacked by a man under the control of another, and more importantly when his mother begins to fall ill. Joseph explains that this is all due to the return of his own grandfather’s rival, Dio.

They soon learn that Jotaro’s mother only has about 50 days to survive her illness and reason that she can be saved if they kill Dio. The two of them (along with a friend of Joseph and the man who attacked Jotaro) chart a course from Japan to Egypt.

Along the way, they meet a new ally who also has his own reasons for killing Dio, and battle countless underling stand users of the latter until they finally make it to their destination. 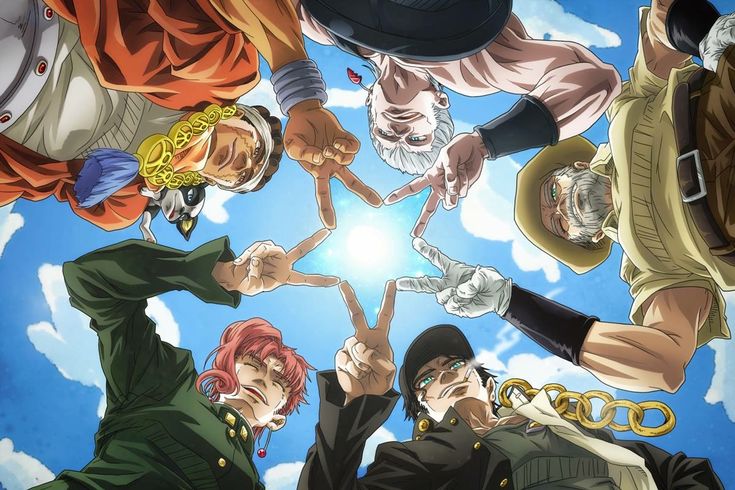 Diamond Is Unbreakable – A Small Town With a Dark Secret

In contrast to the world-traveling adventures of the previous two parts (and even Phantom Blood involved different settings), Diamond is Unbreakable is notable for taking place entirely within the town of Morioh.

The stakes involved are much smaller, with no vampires or ancient beings trying to take over the world or anything. After the introduction of Stands in the Stardust Crusaders arc, the Stand abilities are much more varied and unique from this part on.

The arc is popular amongst fans for many reasons (enough that it received a live-action adaptation), with possibly the biggest reason being its villain. In comparison to the charismatic and haughty villains before, Kira is a deranged man who is trying to live a normal and optimized life.

His wishes to remain unnoticed are both in harmony and in contrast to his actions as a serial killer. While there are plenty of later villains with different motives and ideals, none are comparable to the skewed simplicity of Kira.

This arc starts in 1999 with Jotaro traveling to the town of Morioh to meet Josuke Higashikata, the illegitimate son of Joseph Joestar. While explaining that he will receive an inheritance after Joseph has passed, Jotaro also informs Josuke about a dangerous escaped convict who was hiding out in the town.

After meeting and fighting the man and his stand, the two begin their search for items that gave him his Stand powers, which had been given out by one of Dio’s followers from the previous arc.

As Josuke fights deranged villains who have been given Stand powers and meets various allies, he crosses paths with the main villain of the arc, Yoshikage Kira. While he is seemingly a normal man who does his best to live a normal life, he is also a serial killer who has killed many women and taken their hands as trophies. He is forced to take action as Josuke and his friends begin to investigate him. 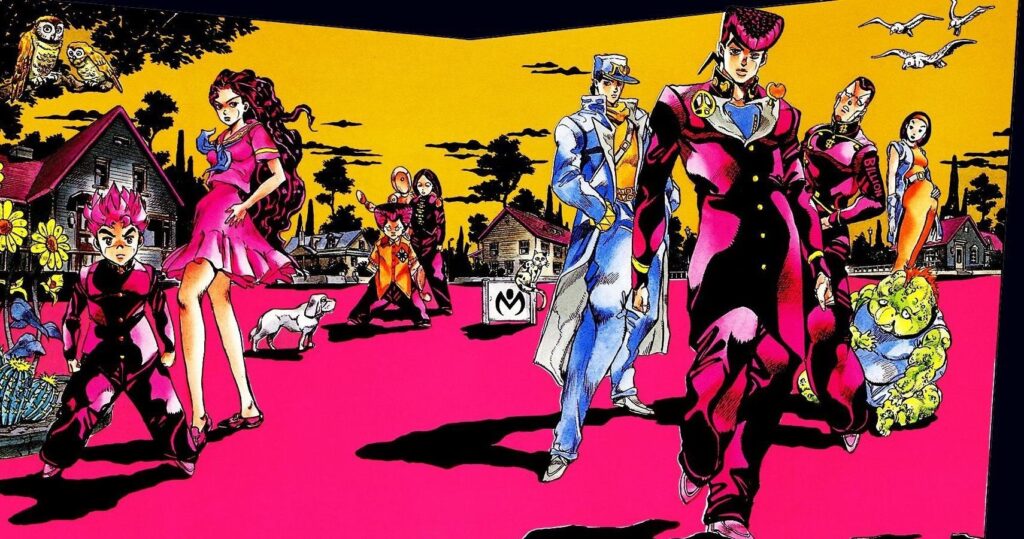 Golden Wind – An Unlikely Son With a Dream

With this, we come to the latest arc to be adapted to the anime. The setting is no longer confined to a small town and instead involves the protagonist and his allies traveling across Italy. Although previous protagonists fought to stop evil threats from reaching their goal or to bring them to justice, this arc’s protagonist seeks to become the head of the biggest crime organization in Italy so he can reform it and use its resources to help people.

While Diamond is Unbreakable features the surprising son of a previous protagonist, Golden Wind (or Vento Aureo) features the son of a previous antagonist… but, kind of technically a protagonist as well. The story starts in 2001 and follows Giorno Giovanna, an illegitimate child of Dio (with Jonathan’s body) after his return in the 80s. While he inherits some of Dio’s infamous battle cries, he seems to also share Jonathan’s pride and wish to help people.

After fighting with Bruno Bucciarati, who resonates with Giorno’s pure wish, Giorno is introduced to a capo of the organization so he may be tested and inducted to it. The series follows Bruno’s group (which Giorno joins) as they attempt to rise up the ranks. This leads to them being given a mission by the mysterious boss himself.

Giorno and Bruno are forced to figure out how to get close to the boss, while also stopping the traitorous hitman team of the organization who has also set their eyes on the boss and disrupting their mission. 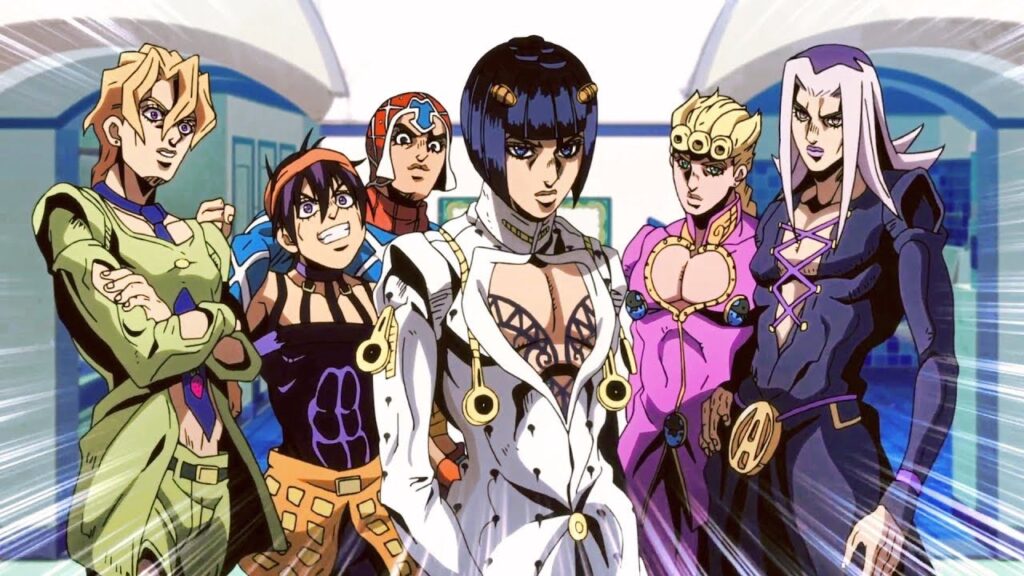 Stone Ocean and Beyond

With the announcement of Stone Ocean receiving an anime adaptation, that leaves the seventh part is known as Steel Ball Run and the eighth part, titled Jojolion, left to be adapted.

David Production has managed to adapt each part with arguably more love and attention that some studios have with adaptations, so I know that the anime adaptation of Stone Ocean will be pretty great.