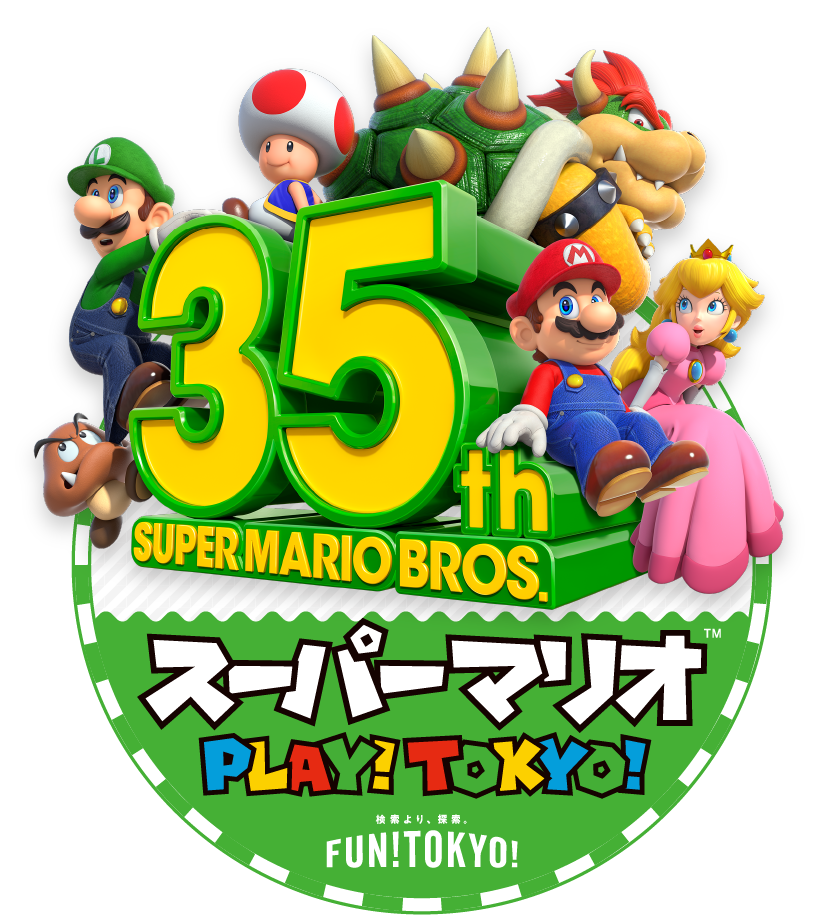 Anyone who has ever navigated Tokyo’s rail system knows that the bigger train stations, with their maze-like passages, can sometimes resemble a video game level.

Starting on Oct. 8, some Tokyo-area stations will look even more like a video game when JR East and Nintendo celebrate 35 years of Super Mario.

They’re calling it Super Mario Play! Tokyo!, and it’s part of the railway’s Fun! Tokyo! campaign.  From what I’ve seen of the station art previews, it certainly looks fun. There will be Super Mario art on display, and a station stamp rally.

First of all, Shinjuku Station will feature a special exhibition of Super Mario box art.

Oversized versions of various Super Mario game boxes will hang from the ceiling near the ticket gates at the South Entrance.  The wall will be covered with scenes from various eras of Super Mario.

(The South Entrance should look something like this from the outside.)

The Tokyo art will feature the evolution of Mario, Luigi, the princesses, allies, enemies, and Bowser. Over the years, Mario has worn a lot of raccoon suits and frog suits, along with his usual overalls.

The Tokyo Station art will be on the second-floor deck of GRANROOF on the Yaesu (i.e. east) side of the station.

Because nobody likes it when the princess is in another castle, here’s what the outdoor area looks like in Google Street Views.

The stamp rally will be held at 35 stations in the Tokyo area.

The rally will be digital with no rubber stamps or stamp passports.  To participate, you have to find a special Super Mario character panel at the station — the exact location is a secret.

Once you find it, scan the QR code on the panel to collect the stamp. There will also be a smartphone app for the stamps.

Of course, there’s more to it than just collecting digital stamps. If you collect QR stamps from five stations and spend 500 yen using a Suica card (or other similar IC electronic transit pass/ fare card), you can get a Super Mario rally sticker.

Collect 15 station stamps, and you can get a Super Mario case for carrying your transit pass/ fare card.

If you collect all 35 QR stamps, you will be eligible to enter a drawing for a Mario clock.  The clock features classic Mario’s pixelated silhouette.  You could also win 10,000 yen’s worth of JRE Points.

Incidentally, the Super Mario fun doesn’t end when you leave the station and get on a train. As we reported earlier, there’s a good chance that your JR East train will have a Rescue Luigi quiz on its video screens.

JR East will also have a special online rally.

Station stamps will be posted daily on a website (https://jresm-online.jp/). If you get 15 stations, you can enter a lottery for a pass carrying case. You will get a computer wallpaper if you collect all 35 stations.