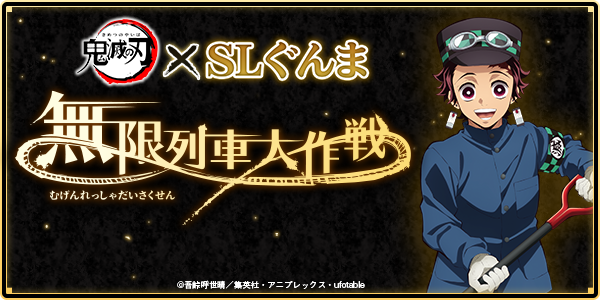 All Aboard the Demon Slayer Express!

The special trains will run from Oct. 9 through Dec. 31.

Judging from the early promos, this will be much more than just a commuter train with some anime advertising or art on the sides.

According to JR East, the special Demon Slayer train will feature SL Gunma Yokokawa, a steam train on the Takasaki Branch in the mountains of Gunma Prefecture.

The train is one of JR East’s Joyful Trains. It runs between Takasaki and Yokokawa stations on the Shin-Etsu Line. (Some steam trains also head north to Minakami.)

The railway event will include character goods for sale, in-car announcements by the Demon Slayer characters, and photo spots.

There will apparently also be hands-on events, puzzles or mysteries to solve, and other related stuff.

Some of the tours offered will also include sightseeing around the Yokokawa Station area, and the nearby Usui Pass Railway Cultural Village. The village is a railway museum featuring the local Usui Toge Railway.

(Anime fans might recognize Usui Pass as one of the many curvy locations on Initial D.)

Details and How To Buy Tickets

The character goods and illustrations feature the various Demon Slayer characters as railway employees. Some are conductors, some are flaggers, some are stokers (the people who shovel coal into a steam engine to keep it going), and so on.

Tanjiro has traded his sword for a shovel.  Zenitsu is selling ekiben. 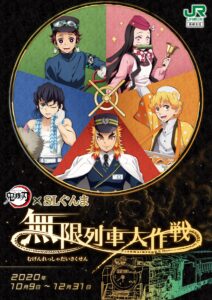 In addition to the SL Gunma Yokokawa, other trains involved in the Demon Slayer promotion will include the SL Yogisha Yokokawa, and the Resort Yamadori train.

The steam locomotives used in SL Gunma service are D51 498, and C61 20.  The Resort Yamadori train is an electric train. According to JR East, it will be used for group tours traveling between Ueno in Tokyo and Takasaki Station.

The SL Yogisha Yokokawa will be a night train on Halloween, Oct. 31.

JR East has also put together a website (in Japanese) with details about the special train.

In the movie, the Demon Slayer corps investigate mysterious disappearances on a train.

The movie will be released in October in Japan. It is expected to arrive in 2021 in the United States.