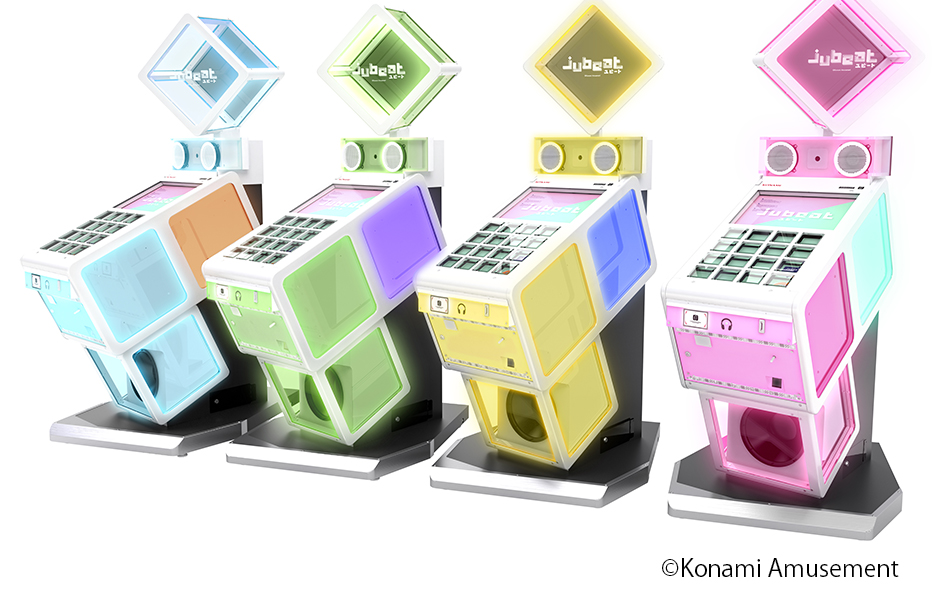 Jubeat (ユビート）is a music game developed by Konami Amusement as part of Konami’s Bemani line, which made its debut in Japanese game centers in the Summer of 2008. This music game was unique at the time as most of the music that was featured on the game was licensed music from both Japanese and Western artists. A first for Konami music games.

The concept of the game was simple, you have 16 panels which each display a marker chosen by the player. Players are to hit the marker in time with the music. Think of it as Whack-a-Mole but to music when the animations called markers appear on the screen which they tap to score points.

The game launched to a luke-warm response, but Konami felt that they had a gem on their hands. It launched with an extremely lackluster song list of only 12 songs initially at launch. This was later expanded to be over 50 songs via online update.

The game had a test run in the United States as UBeat as the name Jubeat could have been bad as most westerners pronounced the game as “Jew Beat”. That would have gone over really well. The concept of the game in the States was not so much a game, but more so a jukebox that you could play.

And The Beat Goes On – The Versions of Jubeat

Since its initial release in 2008, the game has had numerous iterations come to fruition. Obviously, due to the nature of the game play, it’s difficult to have a home version for the game, but thanks to the rapid technological growth of touch-screen devices, Konami was able to make a version of the game for iOS and Android touch screen devices.

The initial release of the game in July of 2008. The original title paved the way for the future of the franchise by introducing players to the concept of the game and gradually raised the difficulty of the game over time through online updates.

The second iteration of the franchise released in the Summer of 2009. Konami made many quality of life changes in the game such as the ability to change the color of the background of the play area while playing. Furthermore, they expanded the online service functionality of the game and added a plethora of new songs.

An expansion to the main Ripples game released in March of 2010. The Append name hasn’t really been used for Konami games since the early beatmania 5 key days on the PlayStation. The append version of Ripples not only added new songs for players to enjoy, but they also added new markers for players to use as well.

Released in July of 2010, Jubeat Knit was released to Japanese game centers. Aside from a complete overhaul of the interface of the game, it now sported over 180 songs for players to play. This was also the first version of the game to implement Konami’s PASELI digital currency service allowing players to access modes of the game which weren’t available to players paying with traditional money.

They also added the “jubility” ranking which rose overtime with the difficulty of songs a player played and how well they performed on them. The jubility ranking went from 0.00 to 10.00. 10 being the most difficult level in the game.

A little over a half of a year later in March of 2011, Konami released the expansion to Knit as Knit APPEND. Similar to the previous APPEND version, the game has little changes to the system however Konami added a number of songs for players to enjoy.

Following the release of Knit APPEND, Jubeat copious released in September of 2011. This version marked the removal of 55 songs due to licensing, however, the total song count was over 210 songs. Jubeat copious also shared a song unlock event with another Konami bemani title, beatmania IIDX 19 Lincle with “Lincle Link” where songs from each game can be unlocked on the other game’s song list.

Following the trend of past versions, Jubeat copious received an APPEND expansion. Releasing in March of 2012, like previous versions prior, the APPEND version of copious added new songs, however, this time there was a new event that appeared titled APPEND TRAVEL where songs from other bemani games songs were unlocked in Jubeat and vice versa. Previously on vanilla copious, this was just with beatmania IIDX songs.

In September of 2012, Jubeat Saucer released to Japanese game centers. Where there weren’t many changes to the overall system from Jubeat copious, there were yet again a number of songs being added to the game. Over the years there were many songs removed from the Jubeat series and for the first time in any bemani game history, Jubeat players could request songs to be revived back into the game by voting on the E-AMUSEMENT GATE website.

Where there weren’t many changes to the system, the obvious observation shows that Konami has once again stopped using the APPEND naming convention, opting to go with something completely different. Aside from having a total of 555 songs, for the first time, players could choose a system voice of a male or female.

Released to Japanese game centers in February of 2015, Jubeat prop had a unique change from its location test version with that being that the system voice changed from a male voice to a female voice. There has been no official announcement as to the reason for this, but I could imagine that it’s due to the majority of players choosing a female system voice on Jubeat saucer fulfill. The total song count has risen to 595 songs as of Jubeat prop.

The strange names just keep on continuing with Jubeat Qubell. Released in March of 2016, this annual release of Jubeat saw the system voice return to a male announcer. Qubell was also the first version of Jubeat which was released without holding a location test a number of months prior to the release of the game. This could be due to the fact that there really weren’t many changes from prop to Qubell aside from the song list.

Released in July of 2017, Jubeat clan had a major overhaul to the system where users would join a neighborhood and unlock content through that system. The system voice has yet again returned to being a female voice, however this time the voice was in Japanese, a first in the series. Furthermore, they did a complete overhaul to the jubility grading scale. By the time the game wrapped up, there were a total of 801 songs in the game.

Released in September of 2018, festo uses a tropical theme and has returned to having a female voice. Not much has changed between the Jubeat clan and festo system-wise aside from removing the neighborhood gimmick.

If A Record Ain’t Broken, Don’t Try To Fix It – The Success of Jubeat?

Jubeat has had a successful run so far, and it just happens to be the only bemani title that hasn’t received a complete makeover since its initial release. This goes to show that the initial idea that Konami had for the game and their initial hopes for the title were true and they did, in fact, have a gem in their hands. 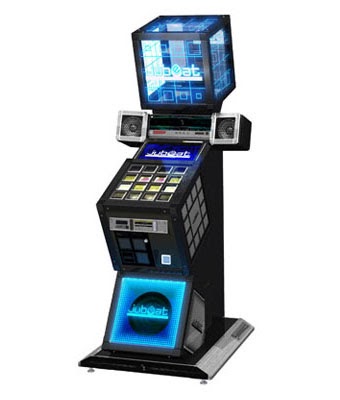 Time will only tell where the Jubeat franchise will go from here, who knows, maybe they’ll release a new cabinet that is super flashy.

Well, more flashy than what is available now. Either way, you can be sure that the game will continue to excite fans around the world and will continue to offer fans a unique way to play their favorite music game.