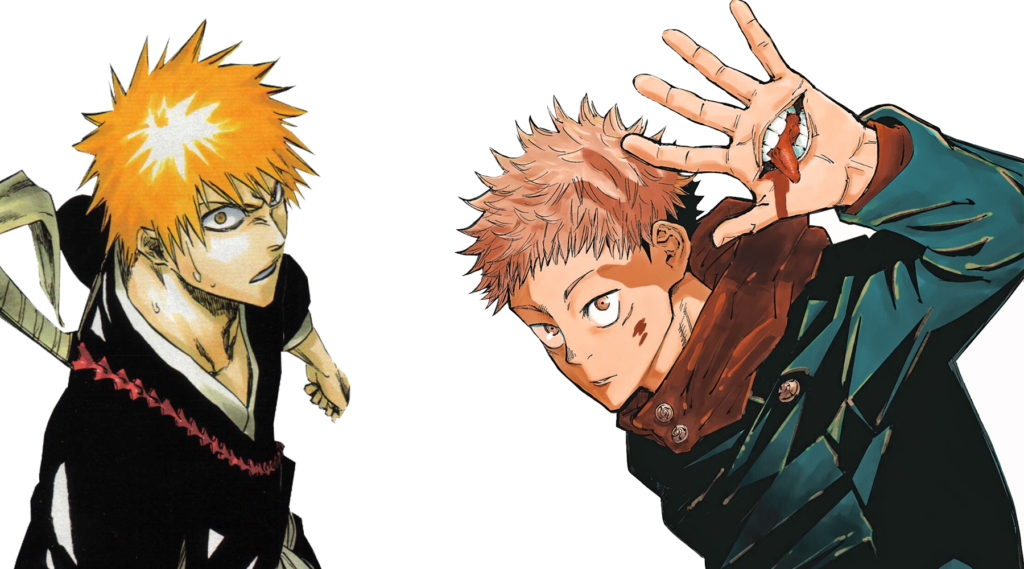 You haven’t been shutting up about Jujutsu Kaisen and we haven’t either. It is the breakout show of 2020, and Studio MAPPA elevated Gege Akutami’s already intriguing comic into the latest international phenomenon introduced to the world by international phenomenon factory Weekly Shonen Jump. You know, that same magazine where everything from Dragon Ball Z and Yu-Gi-Oh! all the way through to My Hero Academia first appealed themselves to wide-eyed adolescents, before being propelled to the world at large.

Unlike those tried-and-true tales, the comic in question, alongside contemporaries like The Promised Neverland and Chainsaw Man, have been leading a revolution in the pages of the magazine that skews darker than traditionally, reads as more mature, and eschews the Dragon Ball derivative ‘Jump Formula’ so heavily relied on in the 90s and 2000. Perhaps not responsible for the trend outright, one can’t help but notice that Jay Kay’s revolutionary particulars draw more than a few influences from its Jump senior of 17 years, Tite Kubo’s fallen titan Bleach.

You don’t have to scratch beneath Jujutsu Kaisen’s rough and sticky surface to see that series homeboy Yuji Itadori and Mr. Bleach himself Ichigo Kurosaki look exactly the same. On its own, that fact is not a prescient nor a useful observation, as millions of anime characters look exactly the same. However, the Shonen Jump boys that tend to resemble one another don’t go for this aesthetic: realistically proportioned, lanky, and atypical spikey strawberry-blonde hair. Yuji and Ichigo aren’t just twins from a different pencil, though; their personalities also match up! Again, another phrase true on paper for many jump heroes, but for two explicitly Not Goku clones (looking at you, Luffy) you have a lot of crossover. Both are kind of cool despite not being too smart; they calmly (keyword) put their bodies on the line for others all the time; and they’re scarred early on by the death of an immediate family member. Heck, they both have evil demon versions inside them who come out to wipe the floor with the series’ respective ghoulies on occasion.

The inherent similarities between Jujutsu Kaisen mainstay Yuji Itadori and Bankai God Ichigo Kurosaki result from more than just Jay Kay author Gege Akutami’s aesthetic preferences. More apparent in the manga than the anime of course, but Akutami’s approach to anatomy and atmosphere takes cues from the link laid down by Kubo twenty years ago. Just one of the reasons why Bleach was the coolest Jumpy comic ever in its early days has to do with how Kubo portrayed bodies; The Bleach head to torso and the eye to face ratio are much closer to reality than the brunt of Toriyama influenced art prevalent in Jump and much of Japanese-cartoonery during Bleach’s heyday. The man strived to convey his elegant taste in fashion, weapons, and character design, sure, but having characters who looked anime and did anime but weren’t shaped anime impressed us all. Jujutsu Kaisen employs a similar realistic proportion meta. Additionally, Kubo’s line-work started out intentionally sketchy and rough, imparting a rougher atmosphere to the comic that too can be found in bulk in Akutami’s comic.

Intentionally or otherwise, Jujutsu Kaisen draws even more inspiration from Bleach via its original premise: A bunch of extremely powerful and especially freaky monsters with varying degrees of sentience tied to lingering attachments of the dead that not everyone can see get exterminated by teenagers. In Bleach, they’re called hollows and in Jay Kay, a more general term ‘Curses’ gets thrown around. With both comics inhabited by what are essentially over-leveled ghosts, eerie atmospheres and conscious morbidity come with the territory. Before it opted to go all sword boys all the time, Bleach started out flirting with a real horror sensibility that Jujutsu Kaisen went on to kiss on the mouth and eventually wed. It’s actually through this particular influence where Jujutsu Kaisen obtains its own adored identity.

Up until now, I’ve essentially glossed over what Jujutsu Kaisen took from Bleach, which could be read as saying ‘here’s how it ripped off Bleach’. Despite the laundry list of parallels here, I don’t think Gege Akutani sat down at his desk and told his illustration assistants ‘we’re making Bleach.’ Instead, it’s plausible he saw a whole world in those Halcyon early days of Bleach (we’re talking pre-Soul Society here) and picked up some threads that Kubo abandoned in favor of endless Bankais, Arrancars, and whatever Fullbrings are. Jujutsu Kaisen doesn’t feel like Bleach; it feels like the very first year of Bleach and has since committed to mixing up those haunting and aged up qualities more than its predecessor was willing to when push came to shove. It’s found great success doing so as well. Ultimately, from its sense of humor to particular curse stylings, Jujutsu Kaisen does have plenty that’s all its own and fans have responded to it in kind. It’s not the comic Bleach could’ve been if Kubo didn’t flip the streamline switch seven volumes in, but coming from that influence it evokes that world once again the same.