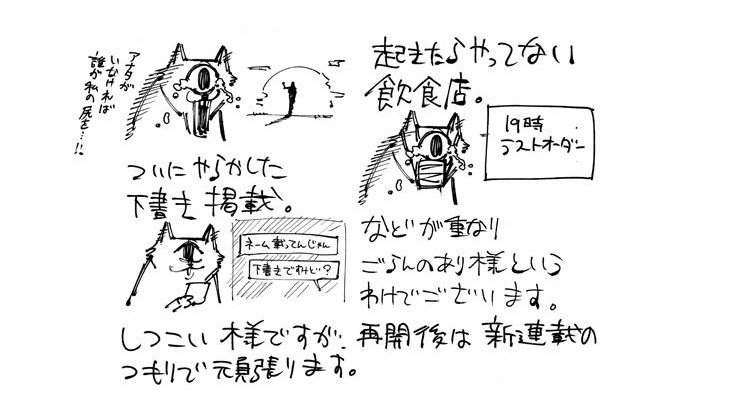 In a move that has seemingly come out of nowhere, Gege Akutami’s Jujutsu Kaisen manga will be going on a hiatus that should last ‘around one month.’

The statement provided by SHUEISHA doesn’t specify a timeframe, but Akutami himself gave the estimate in his author comment. It’s worth noting that while there will be a chapter published in the next issue of Weekly Shonen Jump as normal (on sale 14 June), there will be no new chapters after that. The reason being that serialized artists are always a few chapters ahead of the magazine.

In any case, the statement also provides further details on the circumstances surrounding Jujutsu Kaisen’s latest hiatus. As it turns out, Akutami actually wanted to continue drawing, but the editorial department thought it would be better if he took a longer break to ‘recover his physical health.’ The exact date of the series’ return will be announced ahead of time in the magazine.

Indeed, this isn’t the first time that Jujutsu Kaisen has gone on hiatus. In fact, the series was absent for most of April and May as Akutami took a break before Golden Week in an attempt to recover his schedule. Even so, he explains in his comment that he wasn’t able to do so in the same way as other authors, hence why he decided to accept the editorial department’s offer for a longer break. Otherwise, he feared that ‘the same thing would keep happening,’ meaning intermittent absences from the magazine.

To a certain extent, the writing was on the wall when chapter 150 featured some very sketchy art that looked like it had been pulled straight from the storyboards. Akutami more or less confirms this in his hand-drawn comment, alongside the slightly worrying admission that although it only takes him about ‘half a day’ to draw his storyboards, he spends about ‘two days and a half’ simply lying on his side.

If he didn’t expressly say in his comment that his mental health was fine and that it was more of a physical problem, this might be a cause for concern.

Finally, Akutami remarks that he doesn’t find ‘any appeal’ in a Jujutsu Kaisen that doesn’t release on a weekly basis, which probably explains why he was so reluctant to go on hiatus in the first place. Although the news is a slightly worrying development at a time when the series is arguably reaching the apex of its popularity, you get the sense that this is merely a bump in the road for Gege Akutami.

With any luck, he’ll return in a month stronger than ever.