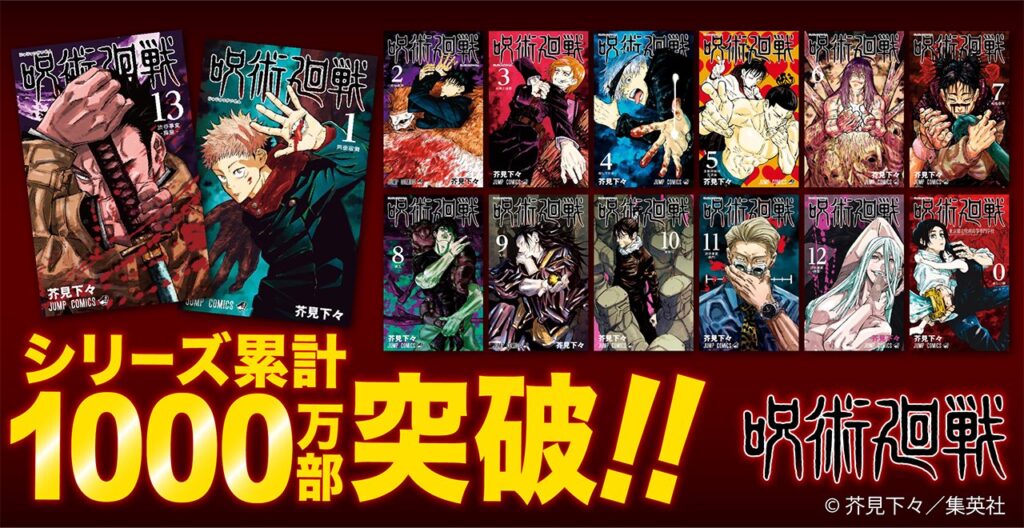 By this point, it should be obvious that Jujutsu Kaisen is well on its way to becoming a massive success. Sales of the manga were unusually high even back when it first began, and the success of the TV anime by Studio MAPPA has only furthered this trend. Yet, the series’ latest sales milestone should make clear one thing: Jujutsu Kaisen is the only Jump series right now with the potential to rival and outpace previous megahits.

The announcement that Jujutsu Kaisen had surpassed 10 million copies in circulation brought with it several surprising figures. According to Oricon, the series’ sales have increased four times since the TV anime was first announced last year. But even in May, Jujutsu Kaisen’s sales only sat at 4.5 million units, meaning that things picked up by 230% in just half a year – a rapid increase.

Of course, the continued success of the TV anime by Studio MAPPA has contributed to this trend: almost every week, the phrase Jujutsu Kaisen trends on Twitter as the latest episode airs. But wait, there’s more: with this latest sales milestone, Jujutsu Kaisen has surpassed Black Clover.

Well, that would have been the case three hours ago, but in the time since first starting and finishing this article, Black Clover’s official sales figures have been updated to 11 million. Still, it’s hardly a fair comparison: Black Clover has 26 volumes currently published alongside nearly 150 episodes of TV anime; Jujutsu Kaisen, meanwhile, is boosting its sales on just thirteen volumes and four episodes of anime. Clearly, one has gathered more early momentum.

Given that we still have two more cours of the Jujutsu Kaisen anime left to go, and the series’ collected volumes continue to be reprinted due to popular demand, there is little doubt that Jujutsu Kaisen’s sales figures will outstrip Black Clover sooner rather than later. But what’s next? In terms of what’s currently being serialized, My Hero Academia: Kohei Horikoshi’s series currently sits at 28 million, so there’s a pretty big gap between it and Jujutsu Kaisen. But, again, considering the momentum, the potential is there.

It's been only a bit more than a month, but this has been quite reduced… We have had some changes in numbers for a few series, and have had a lot leaving the chart completely. But we're still hoping some new series may make it to the chart, maybe… pic.twitter.com/X1GpR6BDN7

Zooming out a little bit, it is interesting to consider Jujutsu Kaisen’s sales success in light of some of its contemporaries. Obviously, the cancellation of Act-Age was a damn shame, preventing an up-and-coming series from getting the attention that it so rightfully deserved. Nevertheless, Chainsaw Man is an interesting point of comparison: despite drawing arguably the same amount of media attention as Jujutsu Kaisen, its sales sit at a mere 4 million.

The comparison is a little unfair, as Jujutsu Kaisen does have the anime to back it up. But it does suggest one thing I’ve been thinking for a while: out of all of the new generation, only Gege Akutami’s series has the potential for mainstream success given its focus on action and battles.

What do you think of Jujutsu Kaisen’s latest sales milestone? Does it deserve its success? Let us know via social media or our Discord server, linked below.

other Carley Garcia 3 weeks ago