One of the problems with how fast Weekly Shonen Jump introduces new serializations is that, sometimes, something can totally slip under your radar without you noticing it. That’s exactly what happened with me and Gege Akutami’s Jujutsu Kaisen, which began serialization in Jump in March of last year.

I’m not sure whether it was because of the language barrier (I was reading Jump in Japanese at the time), but the first chapter failed to grab me with how much dialogue there was. Flicking through subsequent chapters in further issues didn’t grab me much, either. Oh well, I thought, it’ll probably get canceled in no time.

How wrong I was. In fact, there’s quite a lot of hype surrounding Jujutsu Kaisen right now. It’s held a respectable place in the weekly reader survey rankings ever since it’s debut, and it’s volume sales have been very solid.

My Hero Academia author Horikoshi Kouhei even praised the manga, saying that “This will be the next manga to carry Jump. To be able to fight together with it is an honor.”

That’s some pretty high praise from the author of one of Weekly Shonen Jump’s biggest currently running series. And, as it turns out, Horikoshi isn’t alone in this sentiment – many Jump fans have been calling Jujutsu Kaisen “the next big thing” only a year into its serialization, especially given that Jump seems to be hemorrhaging some of its most popular series and authors at an astonishing rate these past couple of months.

Is that true, though? Is Jujutsu Kaisen really set to be one of Jump’s next biggest series, on the same level as My Hero Academia and, dare I say it, Dr. STONE? Maybe. 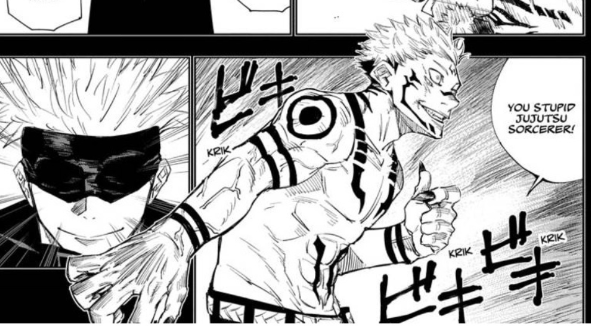 One of the reasons why I’d put my initial dismissal of the series down to the language barrier was because I somehow managed to miss the core, super interesting conceit of the series – that the main protagonist and antagonist share the same body.

Jujutsu Kaisen follows the story of Yuuji Itadori, a normal high schooler who, one day, comes into contact with the ‘Lord of Curses’ Sukuna and ends up absorbing him into his body.

While this isn’t exactly a new concept – it reminds me a lot of the Greed/Ling symbiosis in Fullmetal Alchemist – it’s one that has yet to be placed at the core of a shonen series.

What’s more is that Gege Akutami has effectively developed and explored this concept throughout the series’ first year, making into an even more compelling narrative device in practice than it is on paper.

One interesting development is that a few arcs in, Yuuji actually forms a contract with Sukuna to be able to tap into his formidable power. This helps Yuuji not only demonstrate some super cool abilities but also adds an exhilarating element of danger to his power escalation, as at any moment Sukuna could take advantage of the situation to kill Yuuji’s friends or destroy the world – or perhaps both.

This core conceit is easily one of the most interesting things about Jujutsu Kaisen. Consequently, the series is always at its best when it’s exploring this concept – but, unfortunately, that’s not always the case. 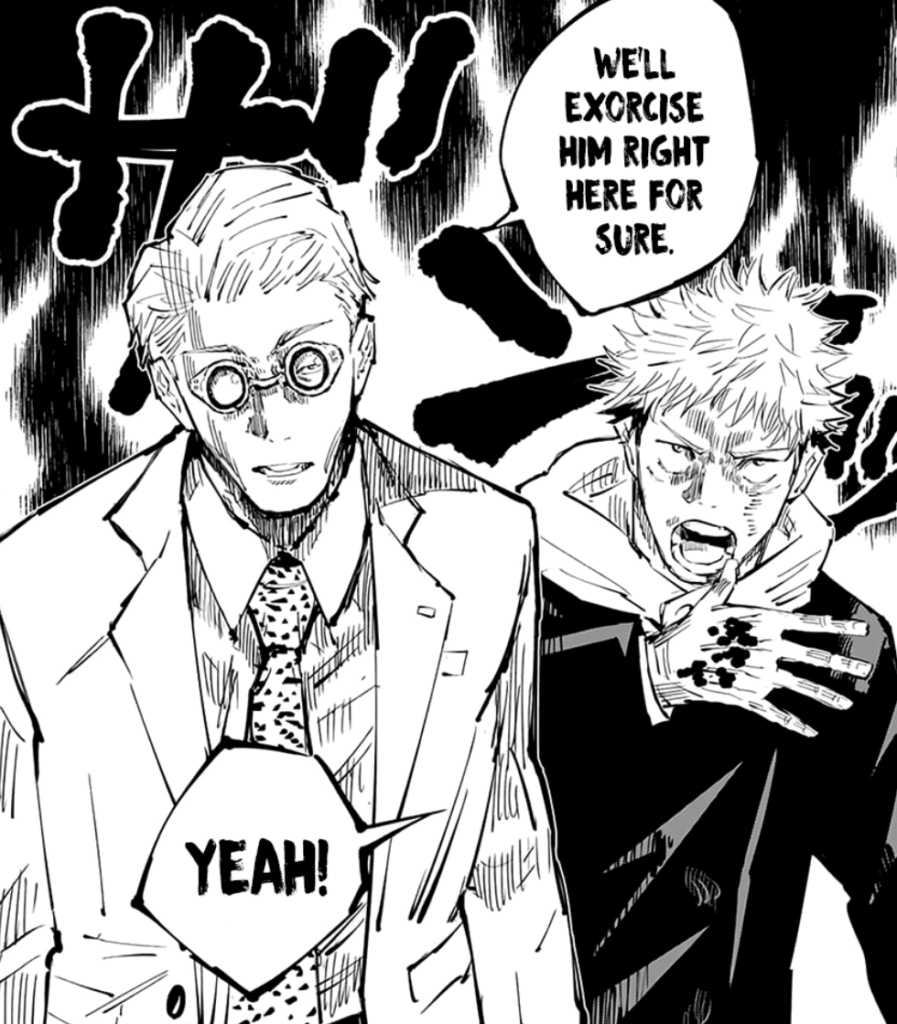 As it stands, Yuuji and Sukuna’s story only makes up one major part of the overall narrative presented so far (as of the time of writing, 63 chapters). In reality, the narrative is composed of different stories of different characters, all contained within a standard story arc structure.

First off, I’m well aware that it’d be ridiculous to expect Gege Akutami to only focus on the Yuuji and Sukuna story all of the time. After all, this is going to be a long-form shonen taking over several years, or perhaps even decades of serializations.

In order to keep the story moving at a manageable pace, there is a need for Akutami to focus on other characters at the expense of Yuuji and Sukuna. Unfortunately, these characters or their stories aren’t nearly as compelling or interesting as our main duo – meaning that, for a fair chunk of time, the series isn’t always the best it can be.

Furthermore, shifting focus away from the main characters and onto side characters in this sense isn’t exactly a surefire way to maintain reader interest.

Sure, there are series in Jump that have managed to pull off a similar transition successfully – I’m especially thinking of My Hero Academia’s tournament arc – but the stories of Megumi and Mechamura simply aren’t as compelling as that of Todoroki and Bakugo, to give but one example.

But even if we don’t get the best type of story that the series can deliver all of the time, then at least we pretty get some pretty consistently cool art. 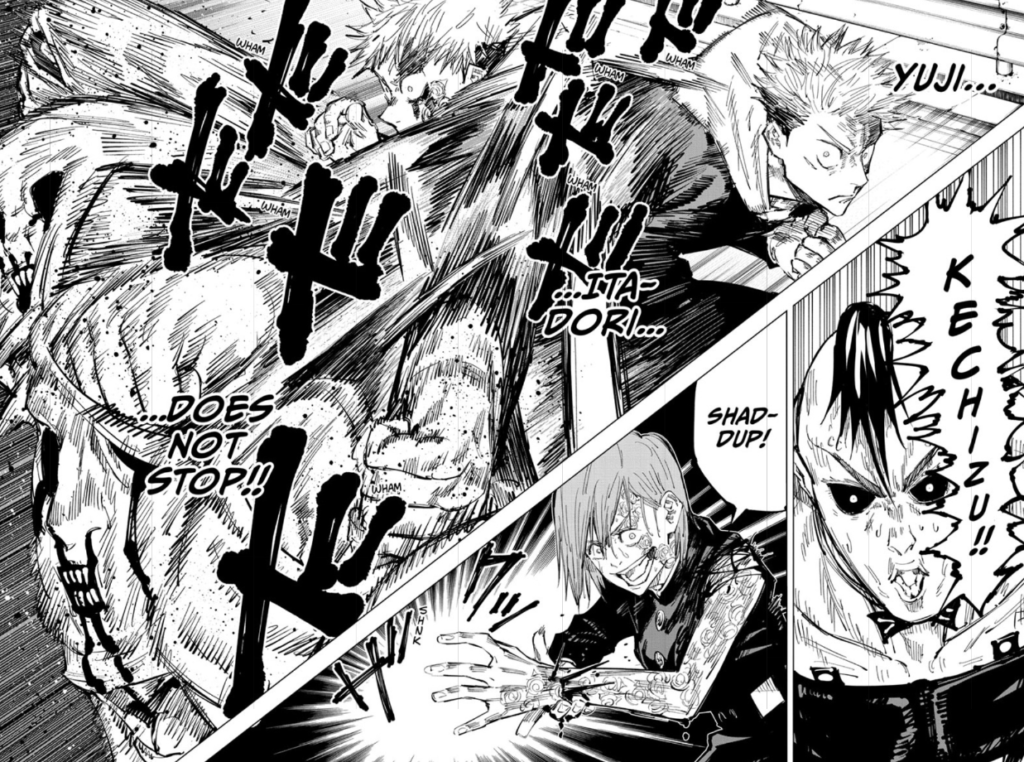 Art can, at least for me, carry a series through its worst moments. In Jujutsu Kaisen’s case, even if I don’t care that much about the characters fighting on the page, then at least they look damn cool doing it.

More specifically, character design seems to be a particular strength of Gege Akutami’s as an artist. While their personalities might not exactly ‘pop,’ each one of the series’ supporting characters has an immediately recognizable design that isn’t afraid to stray from the human form when needed.

Yet, however compelling the designs for our protagonists might be, Akutami has a truly devilish touch when it comes to his antagonists.

Akutami’s character designs for the demons and curses of the series are downright diabolic, oozing evil and malice out of each of every one of their distorted and contorted pores. They do remind of the recently introduced Nen Beasts in the Hunter x Hunter manga, although they obviously appear at a more consistent rate. 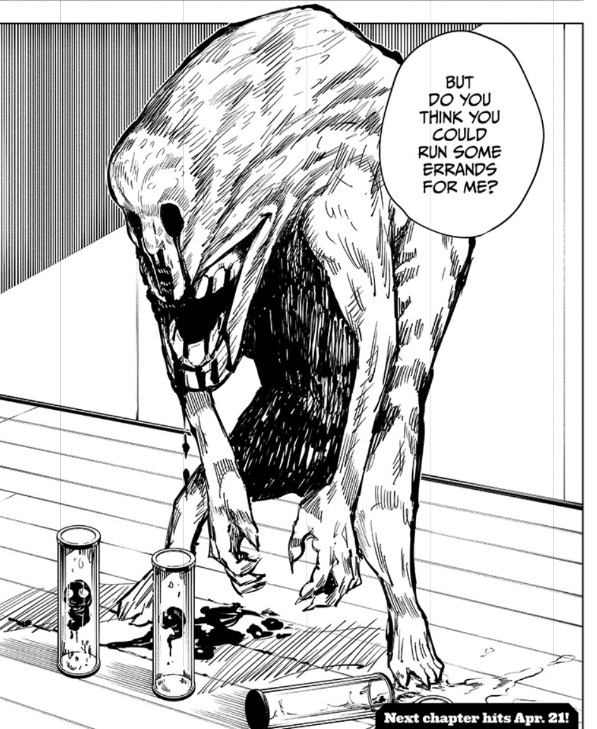 On the subject of superficial things that can keep a series interesting in spite of its flaws, then Jujutsu Kaisen has a keen eye for chuckle-worthy humor.

I won’t lie, the series’ sense of humor isn’t exactly normal – Akutami seems to find great pleasure in over-the-top macho friendship and sadistic death threats – but it’s somehow so absurd that it’s hilarious, and often brings a smile to my face when reading. 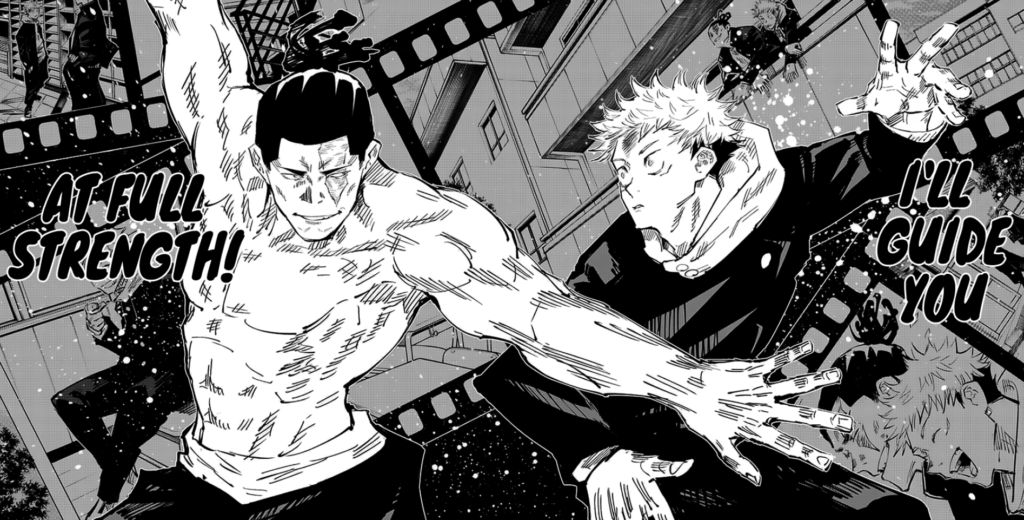 All of that brings us back to our initial question: is Jujutsu Kaisen really going to be Jump’s next big thing?

Regardless of my own experience with the manga, I think it definitely has the potential to be a very popular series. After all, I’m the type of person who reads a lot of shonen manga and tends to check everything in Jump out, which gives me a much broader perspective than the type of person that Jujutsu Kaisen is possibly trying to reel in.

To step out of my own shoes for a second, it’s very possible that Jujutsu Kaisen could be an excellent introduction to the shonen genre for a newer reader. With how much Jump is focusing on capturing the new, often digital only generation, it wouldn’t surprise me if the series was brought over from Jump GIGA to serve that exact purpose.

Gege Akutami’s series is one that brings together a lot of tried and tested shonen elements but somehow manages to present them in an entertaining way. That’s to say, it’s not exactly revolutionary but contains enough new, interesting elements to draw in readers – mainly, the protagonist/antagonist symbiosis.

If a new reader is drawn to the series because of that premise or is recommended the series on that basis, then I’m sure they could, in turn, find more joy in the supporting cast and bear with the truncated focus of the series much more than someone like me.

At the end of the day, that’s always been the power of Jump – the long-running magazine is the home of shonen, possessing a brand potential that allows it to act as the starting place for many future dedicated fans of shonen, and indeed manga itself.

So, when fans and Horikoshi Kouhei say that Jujutsu Kaisen is “the next big thing,” I can’t help but simply reply: well, yeah. Can’t anything in Jump be? 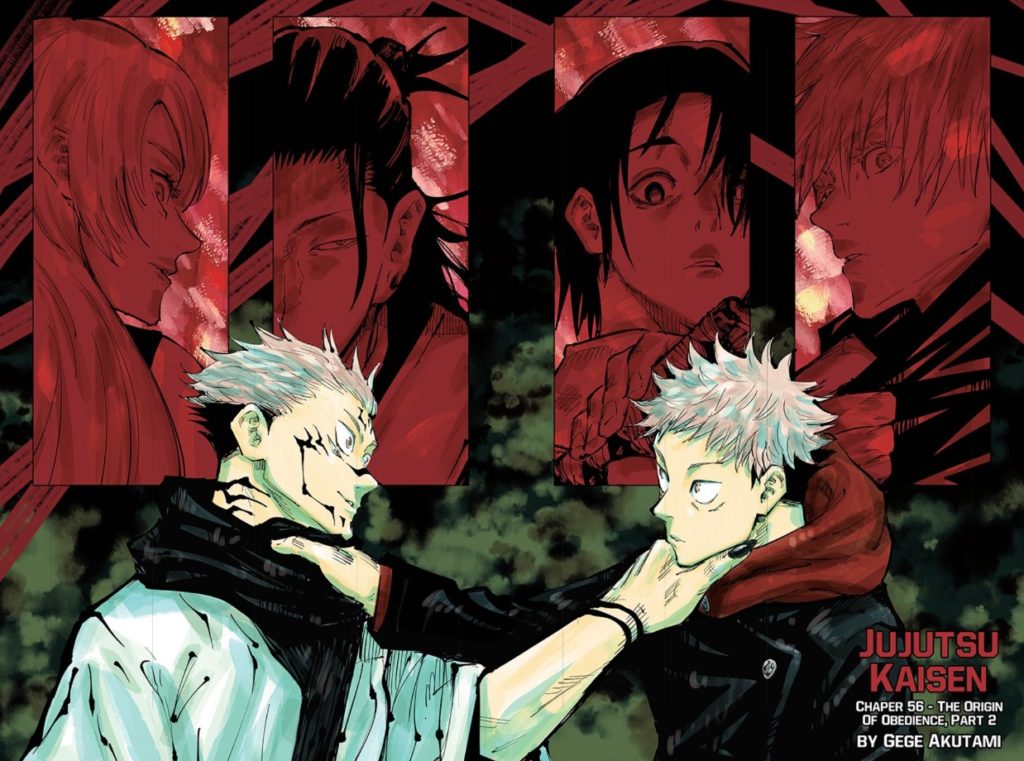 If you’re interested in checking out Gege Akutami’s Jujutsu Kaisen, then you can read it via VIZ Media’s English-language Shonen Jump. That being said, there is a rather large gap of around 40 chapters missing from the service as of the time of writing – but, much like with similar series such as act-age, VIZ will be adding the lost chapters at some point.