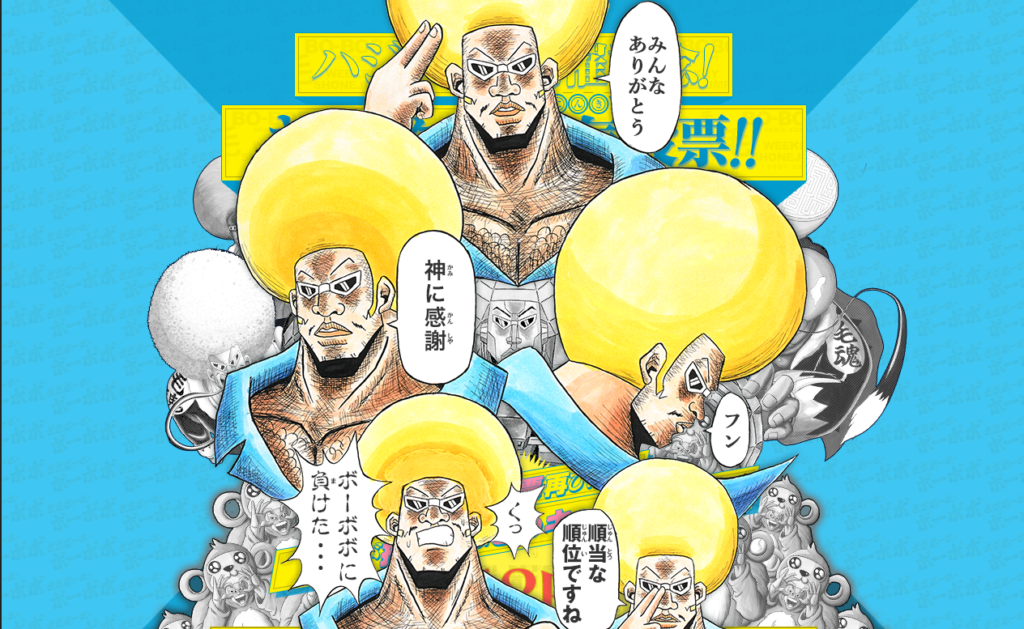 For some reason, April Fool’s Day is taken very seriously in Japan. This year, for example, the girls of Madoka Magica formed an idol group and voice actor Akio Watanabe took a starring role in a new Yuru Camp series. Meanwhile, last year saw Zombie Land Saga team up with One Cut of the Dead, and the year before that saw Dragon Ball face off against Precure in a new movie. While these stunts are intended more for comedy value than anything else, what can be annoying is that they can occasionally touch on some good ideas. Weekly Shonen Jump’s 2020 April Fool’s prank, in turn, is no exception.

If you log on to the Jump Plus online manga and book store service today, then you will be greeted by a pop-up of Bobobo-bo from Yoshio Sawai’s legendary gag manga Bobobo-bo Bo-bobo. Clicking away from that, you will realize that this is just the first step in the series’ take-over of the entire site: it has replaced everything from the website’s line-up to the banner ads. There’s even a so-called ‘popularity contest,’ where Bobobo-bo has somehow won every single place. It’s pretty hilarious, although you can switch back to the regular version if you want. 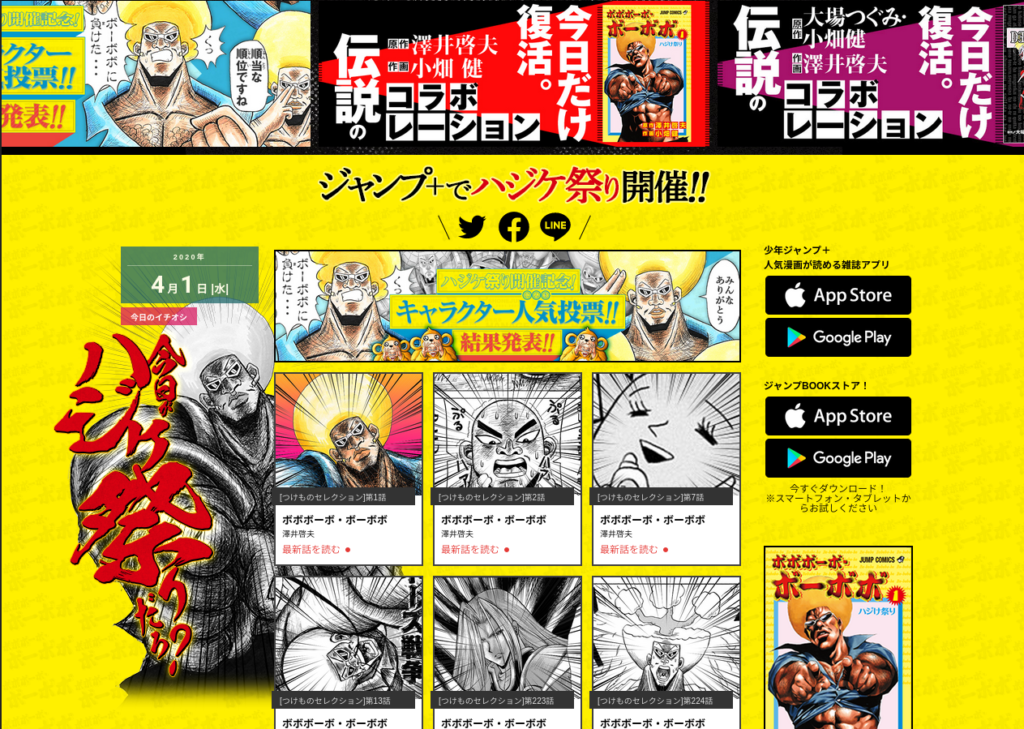 Taking it one step further, Weekly Shonen Jump even organized a collaboration between Yoshio Sawai and Death Note artist Takeshi Obata for their 2020 April Fool’s Day prank. What this means is that the two artists have ‘covered’ one chapter of each of their respective series: Sawai tackling chapter 18 of Death Note and Obata chapter 154 of Bobobo-bo Bo-bobo. Given that the two artists’ sensibilities could not be more different – Sawai comedic and Obata dramatic – hilarity ensues.

Furthermore, to celebrate this unprecedented collaboration for April Fool’s Day 2020, Shueisha has also made the first ten volumes of Bobobo-bo Bo-bobo free to read via their official website. Act fast, though, as all of the content is available for today and today only – that goes for the free manga, as well as the Death Note collaboration.

Hilarity aside, Weekly Shonen Jump’s April Fool’s 2020 comes with a side of sour grapes. Bobobo-bo Bo-bobo has cemented a place for itself as possibly the best gag manga in the magazine’s long history, coming second only to perhaps Akira Toriyama’s own Dr. Slump. But Sawai has been conspicuously absent from the pages of Weekly Shonen Jump for a while now  – he last reared his head in 2016 to draw another collaboration with KochiKame, and his last series ended in 2015, a sequel to the Bo-bobo spinoff Fuwari! Don Patch.

Considering how many other past of the same era have recently made or are set to make a comeback in the magazine – Masashi Kishimoto, Tite Kubo, and even Kazuki Takahashi of Yu-Gi-Oh! fame – is it not the time for his comeback, too? The magazine’s recent struggle to get a gag manga off the ground – although Mitama Security is doing quite well as of late – also seems to necessitate the return of the master.

That being said, there may be several factors preventing a Sawai comeback – his advanced age no doubt being an important one. Nevertheless, Weekly Shonen Jump’s April Fool’s prank for 2020 keeps us hoping.

Edit: It has been brought to our attention that the Yoshio Sawai x Death Note one-shot actually first appeared in 2005, but the point still stands – we want to see the talents of the author return sooner rather than later.