Female Editors at Jump: An Impossibility? 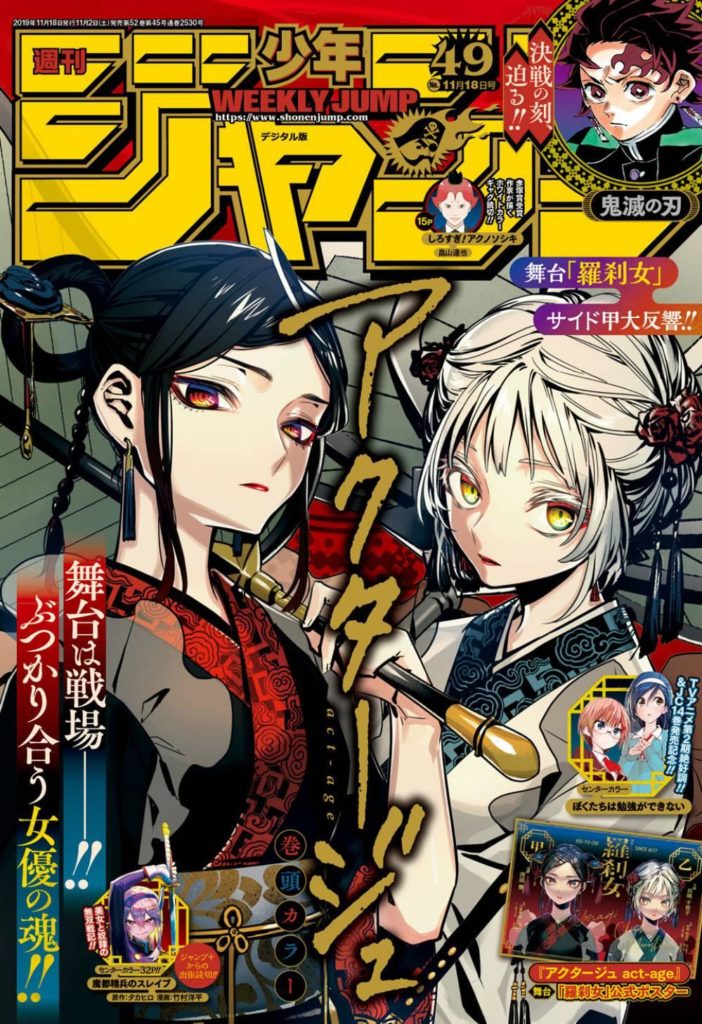 Shueisha’s Weekly Shonen Jump has found itself in hot water yet again this week, following last week’s controversy surrounding the hidden pornographic image featured in Yuuna and the Haunted Hot Springs. This time, however, the outrage has been immense. A Shueisha representative’s comment with regards to the possibility of female editors at Weekly Shonen Jump has left the internet reeling in a controversy that has revealed a shockingly pro-masculine corporate culture at the company.

The controversy surrounding Weekly Shonen Jump and female editors started when a Twitter user by the name of Enzou (炎蔵) shared their experience at a university careers talk delivered by a Shueisha representative:

When a Shueisha HR employee came to my university, he was asked the question ‘Can a woman become an editor at Jump?,’ to which he replied ‘It’s not like there isn’t a precedent for this, but in order to become an editor at Jump you need to understand what’s in a “young boy’s heart”’… This definitely isn’t a lie, this happened this year at a careers talk at my private university in Tokyo.

This tweet then blew up fairly quickly and promptly caused a social media frenzy on Japanese Twitter, in response to which Huffington Post JP reached out to Shueisha for comment. Quoted here is their response:

We go to many universities to deliver careers talks and it is during these that we are often asked about the possibility of women becoming editors at Jump. We answer along the lines of the following:

‘It’s not as if there hasn’t been a precedent for this in the past. We employ female editors at Jump Plus and at Young Jump. If you were an editor of a woman’s fashion magazine, then understanding women’s style regardless of gender would be important. Likewise, if you were an editor at a shonen manga magazine, then you’d probably need to understand what’s in a young boy’s heart.’

With regards to graduate employees, it is not up to the individual sections to decide who to hire, but the company as a whole. We hire talented people and assign them to individual sections according to their aptitudes once they have entered the company. Furthermore, we will refrain from answering when or where the above statement was made.

It’s clear from the comment that Huffington Post received from Shueisha that they stand by what their representative said at the careers fair with regards to female editors at Jump. For Shueisha, there seems to be the worry that female editors might not understanding what young boys might like – the so-called ‘young boy’s heart (shonen heart).’

The idea that young boys, or indeed men in general, are so monolithic and uniform in their tastes and preferences is laughable at best. Even within the magazine of Weekly Shonen Jump itself, there are many different types of stories and series that are enjoyed by many different types of young boys and men. Would it be so strange to think that a woman might be able to grasp at least some of this and become a competent editor at Weekly Shonen Jump?

It’s also important to remember that Weekly Shonen Jump itself has a very strong female following, one that – by Shueisha’s logic – shouldn’t be able to understand these series that are supposedly so closely linked to what’s in a ‘shonen heart.’ A survey carried in 2012 by Nikkei Shinbun discovered that some of the magazine’s most successful properties, such as Haikyu!! and Gintama, are mostly supported by women. Indeed, the average readership of Weekly Shonen Jump in terms of gender can be split almost fifty-fifty because of this. 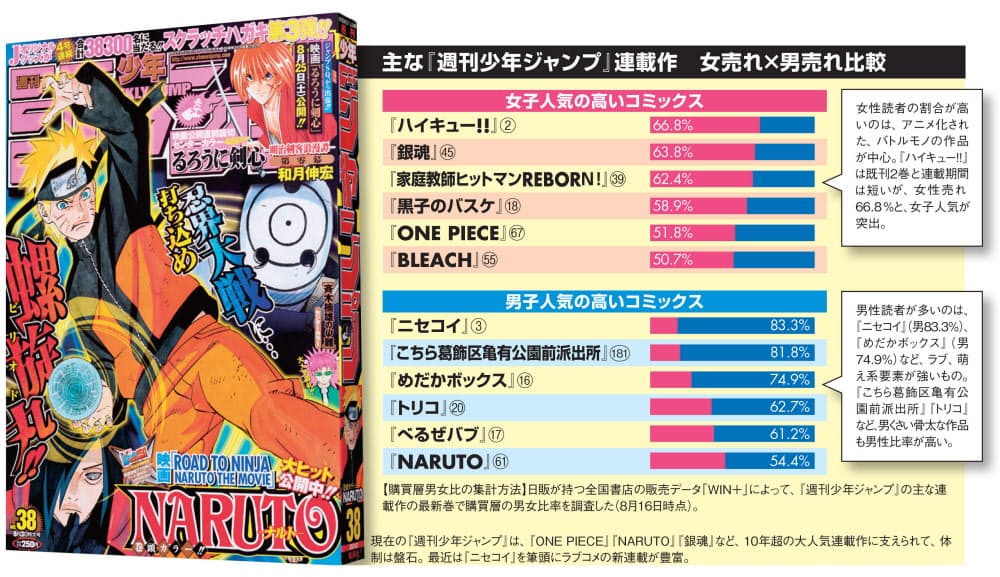 Of course, the objection to this argument is always that these female Jump fans are ‘women who like manga for boys.’ Such was the argument that Astra Lost in Space and SKET Dance author Kenta Shinohara used when he commented on the situation – an argument that provoked such a backlash that he has now retired his account. But would employing female editors to work on Jump really so radically change the character of the magazine’s series?

While an argument can be made that many of the trappings of shonen manga directly relate to the dispositions of men – violence and fan service being key examples of this – we once more have to ask ourselves whether or not shonen today is so closely linked to such ‘universal’ dispositions.

The aforementioned fact that many Jump series in the past have been supported by female fans seems to put this in question. Even now, newer series enjoy an appeal that goes beyond gender – despite being serialized in a shonen magazine. Whether that’s the universal appeal of The Promised Neverland, or the large female fandoms that have grown up around Kimetsu no Yaiba and My Hero Academia, it seems clear that ‘shonen’ manga no longer entirely belongs to the ‘shonen’ themselves.

The validity of traditional Japanese perceptions of masculinity has also been greatly disputed in the modern era with such phenomena as the so-called ‘herbivore boys.’ That is, of course, to say nothing of the large male communities that grew up around shojo manga in the 1960s and 70s. All of this just goes to show that Shueisha’s perception of a ‘shonen heart’ and a potential female Jump editor being able to grasp this is essentially baseless.

If we can prove that the notion of a ‘shonen heart’ is not so monolithic as Shueisha claims it to be, the question, therefore, becomes: why does Shueisha maintain a policy of no female editors over at Jump? The answer, it seems, comes down to a corporate culture that has taken root within the company itself, regardless of how hypocritical it may be.

The funny thing is that when Shueisha offered the examples of female editors working at other publications under their umbrella in their defense, those being Jump Plus and Young Jump, they accidentally revealed their thought process – women can be trusted at these less important publications, but not working behind the scenes of their most important label. Therefore, female Jump editors would be an impossibility.

The pro-masculine corporate culture that this thought process creates over at Weekly Shonen Jump sees its reflection in this description of the Jump offices in 2018 during a TBS radio program by deputy editor-in-chief Oonishi, as translated by @iceemperor_mh:

‘He describes the workplace as basically being a boys only highschool. They say that there are a lot of women at fashion magazines. Jump isn’t on friendly terms with them. Takano says they think of them (Jump) as like rats.

The hosts ask why and Takano says its because their floor stinks of sweat. Oonishi says that there are moments when he wants to work in a department with women. Whether it be Christmas or whatever he’s always with the same 30 guys. Oonishi says that there probably are women who want to work at Jump but in its 50 years of publication there has never been a female editor.’

We also got another hint of this anti-female editor corporate culture over at Jump during an interview to celebrate the 50th anniversary of Weekly Shonen Champion, where current Jump editor-in-chief Hiroyuki Nakano used exactly the same turn of phrase to describe his perception of what makes shonen manga.

Unfortunately, this kind of workplace culture isn’t exactly unusual. The manga editing business as a whole is still overwhelming masculine, even spilling into ostensibly female-oriented series – Bryan Hikari Hartzheim’s 2015 study found that over 75% of shojo manga editors were male, while the majority of the authors contracted were female.

To think that Shueisha has the gall to say the female editors can’t work at Jump because they can’t understand the ‘shonen heart’ and yet employ men to head up series that should, by their own logic, be tied into the ‘female art’ is incredible.

The hypocrisy doesn’t just stop there, either. Despite implying that women somehow wouldn’t know how to make a good shonen manga, Kimetsu no Yaiba has just passed One Piece in total sales for this year – a manga penned by Koyohara Goutoge, a woman. 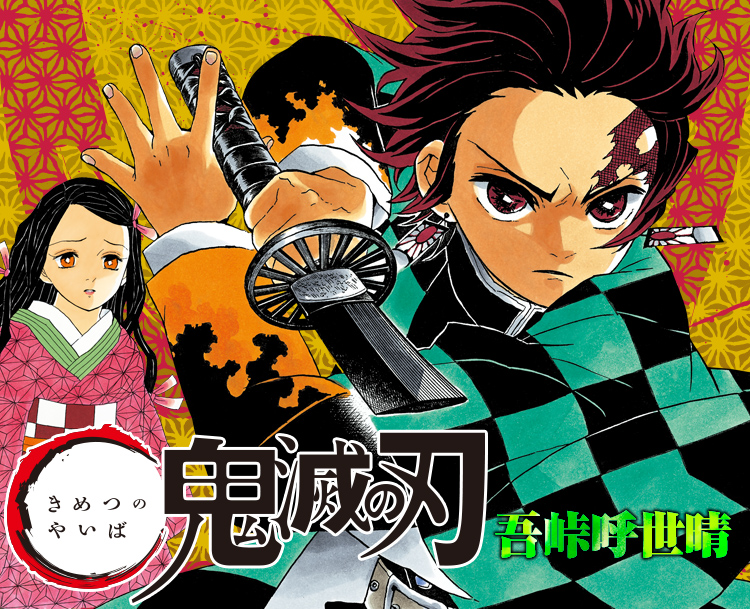 Despite the controversy, it’s unlikely that Shueisha will change their stance towards female Jump editors any time soon. While there are people who are defending the statements, this comes down to the monolithic presence that the company enjoys in the wider publishing world, which hardly compels them to change their policy. Unfortunately, what’ll be needed is for the older generation calling the shots to rotate out and a new, younger generation to take their place.

Even so, it is in the formation of this younger generation of Shueisha employees that a popular protest against the company’s current stance can have a big effect. When it comes time for the newbies to shine, perhaps the outrage will affect their own personal philosophy. Only time will tell.

Looking at the prospects of Weekly Shonen Jump in particular, however, we begin to see that female editors might be exactly just what the magazine needs right now as it languishes in terms of sales and popularity. The whole thing, therefore, becomes not just a question of social justice, but also of improving the landscape of the medium as a whole – something I’m sure we can all get behind.