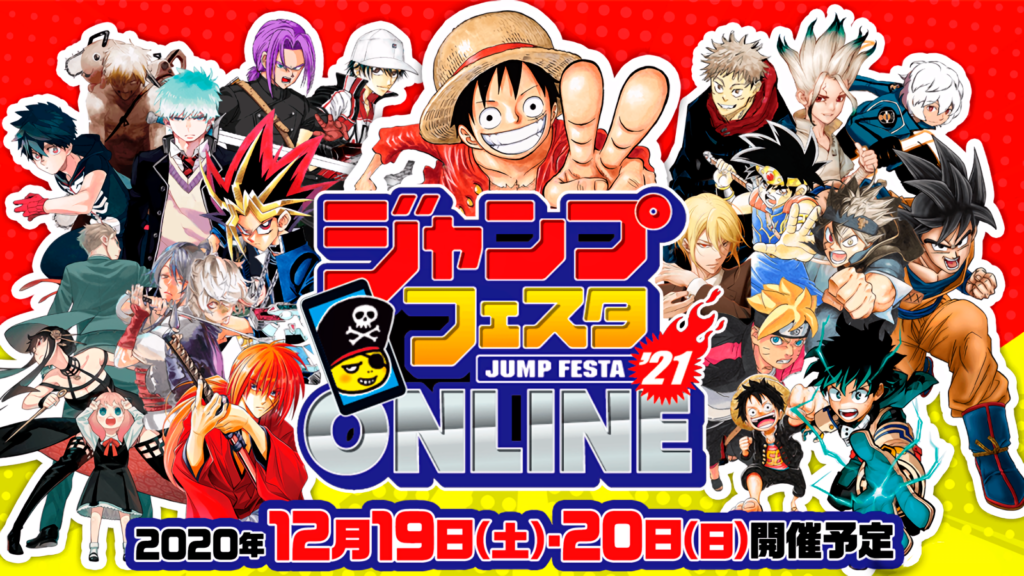 It’s that time of year again: time to try to sum up the ridiculous number of announcements that came out of Jump Festa 2021 Online.

Held from 19 to 20 December, Shueisha’s annual celebration of all things Jump (not just Weekly Shonen Jump, but also Jump Plus, Jump SQ and more) was a little different this year as it was held online, for obvious reasons. This meant that we couldn’t physically walk around the event in Yokohama, but that didn’t affect the quality of the announcements.

Inevitably, there will be some announcements and some parts of Jump Festa 2021 omitted here: this is simply due to the amount of stuff that went on! I’d encourage you to check out Comic Natalie’s coverage for more details, but without further ado…

… let’s start off with the big stuff. Part of the reason why Jump Festa is so exciting is because it is often where initial announcements of anime adaptations of Jump properties are made, and this year was no exception. There were also a couple of first trailers shared for previously announced anime projects.

Undoubtedly the biggest announcement to come out of Jump Festa 2021 was that Tsugumi Obata and Takeshi Obata’s Platinum End would be getting a TV anime next year. Currently serialized in the monthly Jump SQ, Ohba and Obata’s follow-up to 2008’s Bakuman isn’t exactly critically acclaimed, but will draw in audience attention by name recognition alone.

The adaptation is being directed by Hideya Takahashi (JoJo’s Bizarre Adventure: Golden Wind, Keijo!!!!!!!!) over at Studio M.D (Birthday Wonderland, Fate/Grand Order: Camelot movie). It will air in fall 2021.

Another big anime announcement to come out of Jump Festa 2021 was Sana Kirioka’s Taishou Otome Otogibanashi. Once again serialized in Jump SQ from 2015 to 2017, it has since spawned a sequel on the online manga service Jump Plus, titled Showa Otome Otogibanashi. That ended in May of this year.

The anime will be directed by Jun Hatori over at production studio SynergySP in what appears to be his first anime production. No trailer was shown at the event (despite being scheduled to release in fall of next year), so temper your expectations somewhat.

How about something more exciting? Although it was actually announced back in April, Jump Festa 2021 Online finally gave us a proper trailer for My Hero Academia season five. Showing off the joint training between Class 1-A and Class 1-B, it’s exactly what you’d expect from Studio BONES’ adaptation of Kohei Horikoshi’s Weekly Shonen Jump manga and is much more fully fledged than the last one. It’s scheduled to start airing at the end of March next year.

Similarly, although the project was initially announced back in May, Jump Festa 2021 finally gave us the first proper trailer for the upcoming World’s End Harem TV anime. Based on the manga by LINK on Jump Plus, the adaptation is being directed by Yuu Nobata (Kuma Kuma Kuma Bear, High School Fleet) over at Studio Gokumi and AXsiZ. The teaser shows off Taichi Ichikawa and Haruka Shiraishi in the lead roles of Reiko and Mira respectively, as well as the character designs. This one is simply slated for 2021.

One final trailer unveiled at this year’s event was the initial teaser for Hetalia: World Stars. Based on the manga by Hidekazu Himaruya, it was serialized on Jump Plus up until 2018, after which it went on hiatus for unknown reasons. I’d be lying if I said that I was particularly thrilled to have this series back given its incredibly warped view of world history, but it undoubtedly does have a big fanbase.

The obvious omission in Jump Festa 2021’s slate of big anime announcements was the long-awaited Demon Slayer: Kimetsu no Yaiba season two. A new stage play was announced to be opening this summer, but no follow up to Mugen Train just yet. This only feeds into my anxieties that Studio ufotable is going to adapt the entire rest of the manga into movies, given how well the current one is currently doing.

Jump Festa isn’t all big anime announcements, however. Some of the other updates are quite small, only providing additional information on upcoming or previously announced projects: here are some that we think are interesting. It’s far from an exhaustive list.

Coming into Jump Festa 2021, we all expected some big news on Tatsuki Fujimoto’s Chainsaw Man. The gun was already jumped somewhat when the series came to an end in Weekly Shonen Jump, also announcing that it was getting an anime adaptation by Studio MAPPA, but the series’ Super Stage announced that its ‘part two’ continuation on Jump Plus would center on a ‘School Arc,’ confirming what was suggested by the final chapter. Cool.

World Trigger season two is also set to begin airing in a matter of days (10 January), but Jump Festa 2021 already announced a season three. What gives?

Looking a little closer at the details, we can see that World Trigger season two will only run for one cour (one quarter of a year). This means that season two won’t adapt the entirety of the Rank Wars arc, and neither will season three since it is also only one cour. Looks like anime-only fans will also have to share in us manga reader’s suffering.

What’s more, Jump Festa 2021 finally provided us with a key visual and trailer for the new Prince of Tennis 3DCG movie, titled Ryoma! Rebirth Movie The Prince of Tennis. This was actually announced ages ago, but was pushed back from its 2020 release date due to disruption caused by the Coronavirus (COVID-19), and even then, we had no idea how the characters would look in 3D animation.

Thanks to the above trailer, we now do. It looks pretty good. A new release date has also been set for September 2021.

Another project that’s finally coming to fruition from last year is Kemono Jihen. Based on the Jump SQ manga by Shou Aimoto, a new trailer was unveiled at Jump Festa 2021 that shows off more story, more characters, and more cast members. Worth noting is that it was initially announced alongside Moriarty the Patriot, suggesting that it was supposed to come out this year, but now has set its sights on a 10 January release date.

Finally, it was already announced earlier this month that movie-goers to Gintama: THE FINAL (supposedly the last film in the franchise, but you never know) would receive special cards with Kimetsu no Yaiba illustrations on them, drawn by original author Hideaki Sorachi.

This was a classic joke emblematic of the pop culture awareness that makes the series so great, and Jump Festa 2021 gave us a look at Sorachi’s take on Koyoharu Gotouge’s demon-slaying characters. You can see them above. Pretty good, no?

It would be remiss of us to conclude our coverage of Jump Festa 2021 Online without at least mentioning that fact that the event was, well, online.

This year has been incredibly challenging for businesses and consumers alike, so the initial decision to forgo a physical event must not have been taken lightly by Shueisha and their partners. The worry was that a virtual event wouldn’t capture the same feeling as it would in person, but I think it went pretty well: not only was it a bunch of fun, it also allowed overseas fans to participate for basically the first time ever.

That second part does come with a big asterix, however, as you needed a Japanese account to download the Jump Festa app from Google Play or the App Store. That hurdle is easily overcome, though, by simply using a VPN or a third-party app store.

Thankfully, fans outside of Japan appear to have grasped this simple workaround as I saw many foreign names as I made my way around the island. The hashtag #ジャンプフェスタ2021 was also filled with tweets not written in Japanese.

Shueisha could’ve easily copped out and done the whole thing as a livestream, just as they did for Jump Anime Festa, but they decided to go several steps further: create an entire virtual island filled with activities for fans to enjoy.

While quite a lot of the content still directed you to websites and into your web browser (and the stages were live streamed through YouTube), it still felt like a considerable amount of time and effort had gone into making the experience as compelling as possible.

One particular highlight for me was the ‘Genga Museum,’ which displayed special art and illustrations from authors currently serialized in any one of Jump’s magazines. This really drove home the manga empire that Shueisha has built up over the years, as the illustrations stretched as far as the eye could see. Tracking down and posing in the special frames created out of iconic panels from Jump series was also pretty fun.

Jump Festa 2021 Online was a big success. Shueisha managed to successfully overcome the hurdles that come with hosting an event online, even going above and beyond the call of duty. There were also a fair few exciting announcements: Platinum End and Taishou Otome Otogibanashi getting anime adaptations is still great, even if Kimetsu no Yaiba season two was nowhere to be seen. I’m also hoping that this Prince of Tennis movie actually releases next year!

Jump Festa 2021 was conducted online from 19 to 20 December. There are no more events scheduled, but you can still enjoy the app and its activities up until 27 December! Check out the official website for more details.