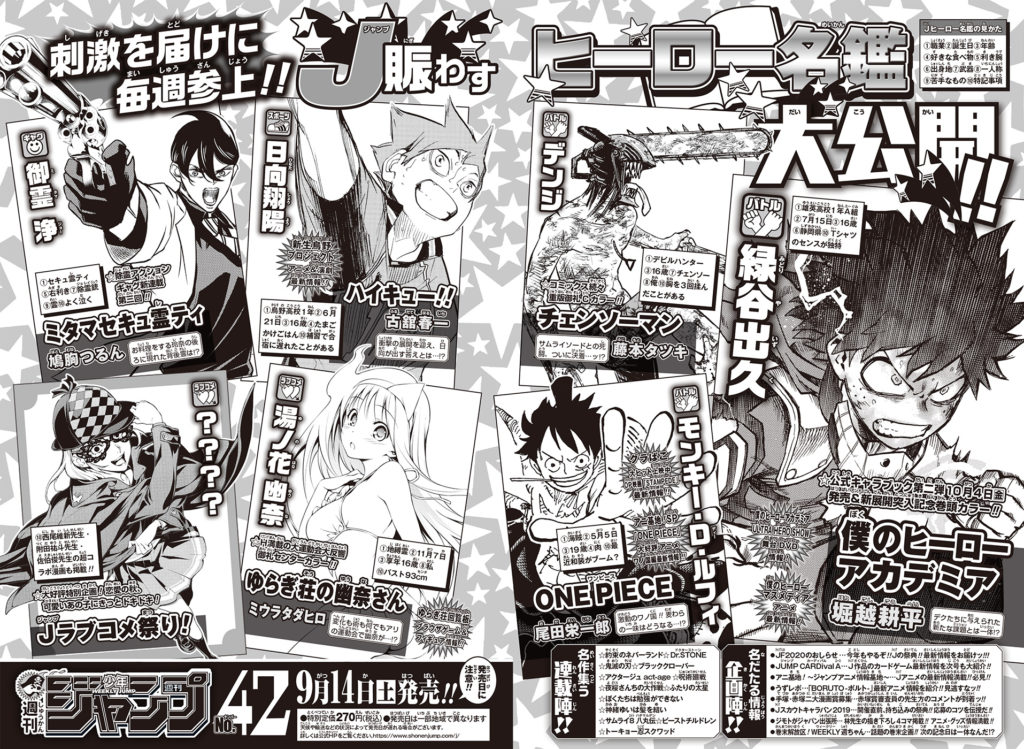 The Weekly Shonen Jump official website described Jump Love Comedy Festival as a ‘super collaboration manga’ that will ‘surely make cute girls’ hearts skip a beat’ during this ‘autumn of love.’ No prizes for guessing that it’s classified as a love comedy, either.

This information, along with our first look at what appears to be the series’ masked antagonist, was revealed via the promotional image for next week’s issue of Weekly Shonen Jump.

Now, one of the first questions that should come to mind when looking at this collaboration is: where on earth did this all come from?

Shun Saeki and Tsukuda Yuto haven’t exactly had a lot of free time so far this year, as they’ve been finishing up their Food Wars! series after seven years of publication in Weekly Shonen Jump and then Jump GIGA, as well as embarking on a trip to the US.

While it’s true that the shift from weekly to monthly serialization following Food Wars!’s move to Jump GIGA in June earlier this year may have given the pair a little more free time than they’ve been used to, I still can’t see why they’ve been paired up with Nisio Isin, of all people.

Nisio Isin’s style of meta-humor and penchant for abstract storytelling, most evident in his Monogatari light novel series, doesn’t really seem to be a good fit for Tsukuda Yuto’s style of more earnest, straightforward shonen storytelling.

But, then again, Isin has been scraping around for a new manga series for a while now, having launched many one-shots with other artists since the conclusion of his Shounen Shoujo manga in Jump SQ in 2017. So, perhaps teaming up with the Food Wars! duo is the only option he has left.

Still, I always hoped that Isin would return to the pages of Weekly Shonen Jump in collaboration with Akira Akatsuki, who handled art on Medaka Box and Shounen Shoujo. Could this spell the end of that particular collaboration? Will Jump Love Comedy Festival prove more effective than it sounds in concept? We’ll just have to wait until next week to see.