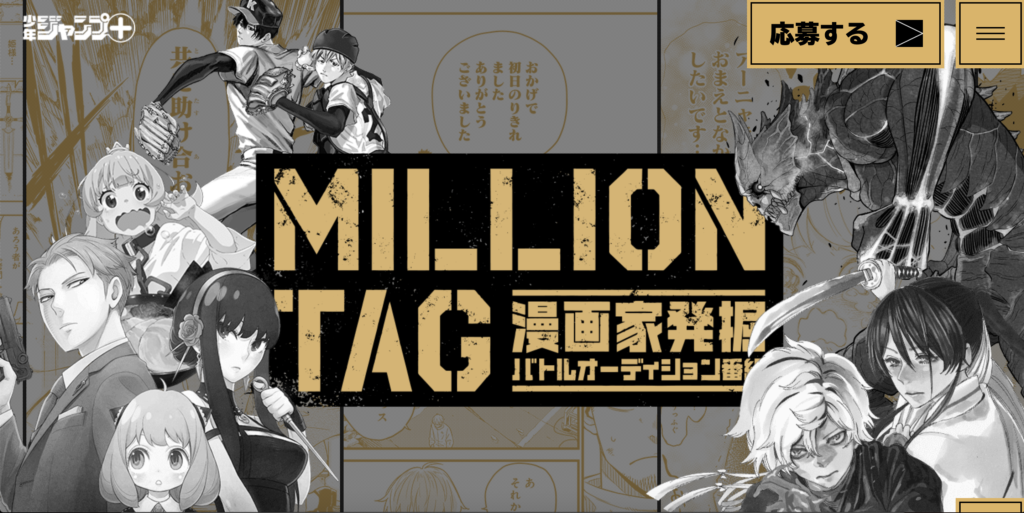 It feels like almost every month we get some sort of new Jump Plus campaign or initiative. Just over a week ago, Shueisha’s online manga service announced that it would be offering select rookies a serialization without editorial oversight, and in October, professionals were being given a second chance on their rejected manuscripts. This latest campaign, however, takes the biscuit: titled ‘Million Tag,’ it is giving six successful applicants the chance to win five million yen, a full serialization, a collected volume release, and an anime adaptation.

Hang on just a minute. Disregarding the other three prizes, which are pretty normal, aren’t manga usually given the anime treatment after they’ve proven to be popular? It took Dr. STONE a full year to get one, for example, and Jujutsu Kaisen the same, so that’s quite an eyebrow-raising declaration.

Looking at the details on the official website, we can see that this Million Tag anime adaptation won’t turn out to be anything major: it’s described as the ‘equivalent’ to one episode of anime, and will be streamed via the official Jump Channel. Something along the likes of the Boukyaku Battery OVA, then, might be a bit more realistic.

Nevertheless, the sentiment is there: Jump Plus is serious about using the Million Tag campaign to generate some new hits for the website, bolstering their already impressive line-up.

As the name suggests, the six authors will ‘tag’ and team up with six editors from the Jump editorial department, who are introduced in the above PV. The way that they are described is also quite entertaining: obviously, the star of the department Shihei Lin is front and center (he edited both SPY x FAMILY and Chainsaw Man), along with ‘Weekly Shonen Jump’s New Generation Star’ Yusuke Asai (MASHLE, Kimetsu no Yaiba) and ‘The Assassin From the Shojo Manga Department’ Hatakeyama (Futari de Koi wo Suru Riyuu, Kanojo ga Kawaii Sugite Ubaenai). @WSJ_manga on Twitter has a full list.

Only one author out of six will be in with a chance of winning all four prizes, so make sure to check out the official website if you’re interested in entering. Unfortunately, applicants have to live in Japan, so overseas artists can’t apply. Nevertheless, it’ll certainly be interesting to see what kind of project comes out of this Million Tag initiative.