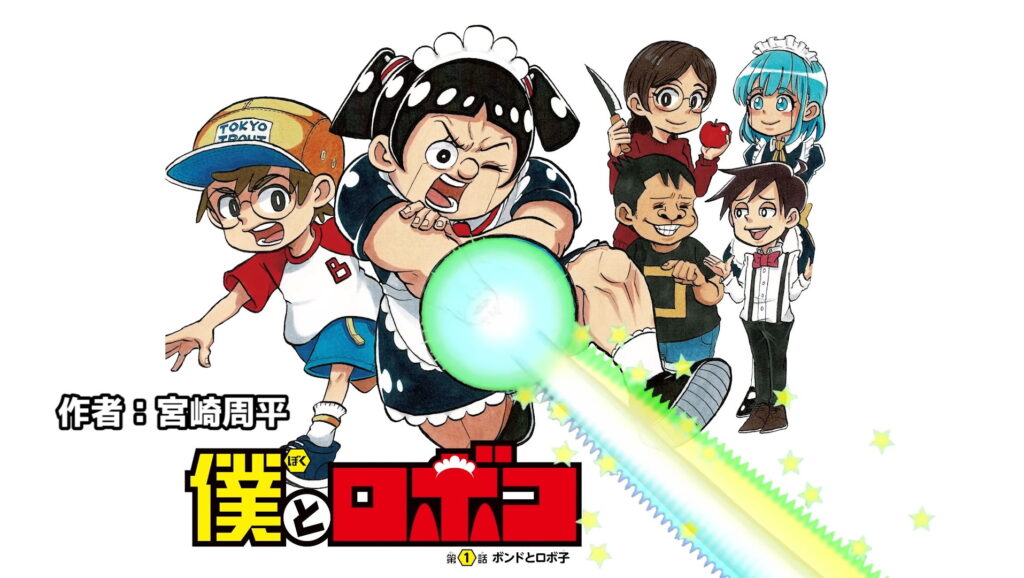 Weekly Shonen Jump is creating “voice comics” for its serialized series as part of the Jump Channel renewal, launched back in October. This week will see a new video go live every day, starting with Shuhei Miyazaki’s Me & Roboco, which is releasing its first collected volume on November 4. Production quality aside, this fits into a wider trend of manga publishers embracing the video format – signaling manga’s digital future.

As mentioned, the “voice comic” version of Me & Roboco chapter 1 is available now, consisting of two parts. Much like other “animated” manga we’ve seen in the past, what this consists of is animated text coming in and out with the dialogue and voice acting of dubious quality, if not terrible.

Undoubtedly, one of the worst things about this first entry in the Jump voice comics initiative is Roboco’s voice, which is quite different to what I and many others imagined.

Still, this is a great promotion for Me & Roboco’s upcoming first volume release, and serves to engage those consumers who don’t like to read. Furthermore, it has great potential for discoverability, as the YouTube algorithm works in mysterious ways – no wonder almost every other publisher under the sun is doing it.

One does have to wonder, however, what the rationale behind picking Me & Roboco as the first Jump series to get the voice comic treatment is. Is it simply a case of wanting to promote the upcoming first volume? Or is it because gag manga work particularly well in video format? Considering that Kodansha recently animated the first chapter of Attack on Titan for its YouTube channel, that second point clearly isn’t the case.

If I was to guess what the next entry in the Jump voice comics initiative might be, I’d probably put my money on Magu-chan: God of Destruction: not only its first volume also releasing on November 4, it also would benefit from a boost in discoverability. My only hope is that they get someone more fitting to voice the titular character.

You can watch the Weekly Shonen Jump voice comics via the official Jump Channel.