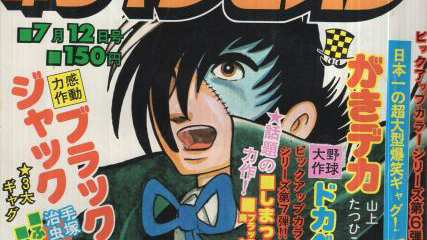 Kabemura Taizo: The Man Who Shaped Shonen Manga Into a Powerhouse

50 years ago, the landscape of shonen manga was very different from how it is today. Aside from such numerous technological advancements that have changed the medium of manga itself since then, the very way that shonen manga was published has completely changed. But who, or what, was it that brought about that change? Two-time Weekly Shonen Champion editor-in-chief Kabemura Taizo… that’s who.

The World Before Kabemura Taizo

Before Kabemura’s first posting as Champion chief in 1972, the world of manga was in almost complete anarchy. After all, the industry had only been around for about 20 years at that point, and there were almost no guidelines for how to make manga, let alone how to make a successful shonen magazine.

Shonen magazines such as Shueisha’s Weekly Shonen Jump and Kodansha’s Weekly Shonen Magazine (launched in 1968 and 1959 respectively) tended to simply follow what was popular at the time, often pivoting their entire line-up to one genre, such as sports or martial arts, in an attempt to maintain readership.

This also meant that many series weren’t exactly developed with an eye for longevity and were constantly under fear of cancellation. Even the most iconic creators of the era, such as Go Nagai and Tetsuya Chiba, were often forced to suddenly abandon ship and scramble about for a new manga to preserve their livelihoods, which, inevitably, had an effect on the quality of the manga.

Akita Shoten’s Weekly Shonen Champion, which was launched a little later than the aforementioned two in 1969, was no exception. Kabemura Taizo’s predecessor, Narita Kiyomi, called on the talents of some of the era’s most prominent creators, such as Osamu Tezuka and Takao Saito, to help bolster the magazine for its inception, but this was only for the short-term.

There was no plan or strategy to help develop these series or cultivate the magazine in the long-term; at least, not until Kabemura Taizo came along.

Kabemura picked up the mantle of Weekly Shonen Champion editor-in-chief in 1972, after working his way up the ladder to editor-in-chief of another Akita Shoten manga magazine, Manga King, for over 10 years.

It was during his time at Manga King, however, that Kabemura, despite apparently knowing next to nothing about manga beforehand, began to realize that big changes were needed if Akita Shoten wanted to stay competitive.

To this end, he took the decision as editor-in-chief to make all the manga in Manga King run on episodic stories, allowing anyone and everyone to pick up the magazine and enjoy the stories within.

Yet even if this model saw some success over at Manga King, the competition was a lot tougher in the weekly manga sphere that Weekly Shonen Champion inhabited. If he wanted his magazine to win out against Shueisha’s Weekly Shonen Jump and Kodansha’s Weekly Shonen Magazine, among others, then he needed to go one step further.

He did this by combining his episodic series philosophy with a general strategy for the magazine itself, aiming to ensure readers with at least three series that interested them in a bid to boost sales.

This strategy has now become known among shonen magazine editors as the ‘Kabemura Taizo three series theory,’ even coming up in a recent interview between current editor-in-chief Takekawa Shingo and current Magazine chief Kurita Hirotoshi. In fact, that interview served as the impetus for me to write this article in the first place.

Even so, it’s unlikely that Kabemura ever called it by this name in his lifetime. All he knew was this: that trying to follow three series each week was far too many to simply stand and read in the bookstore or by borrowing the magazine from a friend, so you’d inevitably end up buying the magazine and bringing it home with you, thereby boosting sales numbers.

But not everyone likes the same type of manga, so Kabemura needed to go against the prevailing trend-hopping editorial method of the past and instead choose to serialize a wide range of stories that targeted many genres, the so-called ‘kids lunch’ style of magazine arrangement that some editors still subscribe to.

Not shifting gears in tandem with changing trends also allowed Weekly Shonen Champion to cultivate more sustainable, long-term series which, from a certain perspective, were at odds with Kabemura’s insistence on episodic stories.

We see in all the changes that Kabemura brought to Champion during his leadership the archetypal form of the modern shonen magazine, and the first emergence of any sort of concept of editorial strategy coming out of the wild, wild years of the 1950s and 1960s.

In this sense, the impact of Kabemura on the world of shonen manga was (and remains) immense. Some, including myself, would even go as far as to call him the man who made shonen manga.

That statement is, however, up for debate. Many other editors and creators have influenced the medium in massive ways, after all. But there is no denying that Kabemura was, and remains, the greatest editor-in-chief that Weekly Shonen Champion has ever known.

As to why, this is because the changes that Kabemura brought to the format and strategy of the manga led directly to the beginning of Weekly Shonen Champion’s golden age, as it birthed hit after hit such as the supernatural cult classic Babel 11, the baseball epic Dokapen, and the legendary gag manga Gakipen.

Yet, even among such legendary series, one arguably stands heads and shoulders above the rest – Osamu Tezuka’s Black Jack, which began serialization in Champion in 1973 and ended ten years later, in 1983.

Black Jack is considered by many to be one of Tezuka’s finest works, as it delivers chapter after chapter of tight medical drama with one of the most iconic yet complex protagonists of all time in the form of the titular Black Jack.

The thing is, Black Jack probably would never have existed without the help of Kabemura Taizo.

Of course, by the 1970s, Osamu Tezuka had already seen considerable success with his manga Astro Boy (Tetsuwan Atom in Japanese), which ran from 1952 to 1968 in Kobunsha’s ‘Shonen’ magazine.

Astro Boy’s success had brought him wealth and status, but trying to break into the world of animation proved a massive drain for Tezuka, especially when he was forced to step down as an executive of Mushi Production in 1968 and form yet another studio, this time called Tezuka Production.

Times were also changing, with Japan as a whole shying away from the cartoonish appeal of Tezuka’s earlier works, such as Astro Boy and Jungle Emperor Leo, no doubt due in part to a general feeling of pessimism following the historic defeat of anti-war protestors at the beginning of 1969 and the escalation of the Vietnam War, in what is now referred to as the ‘gekiga boom.’

All of this meant that Tezuka was in quite a dark place, both financially and artistically, at the beginning of 1970. But it was Kabemura Taizo who believed in the man’s talent and decided to give him a series in his new magazine, Weekly Shonen Champion.

Tezuka and Kabemura had actually worked together before on Boku no Son Goku, a Journey to the West adaptation that ran in Manga King from 1952 to 1956. It was during this time that Kabemura saw Tezuka’s genius first-hand, which allowed him to believe in the creator’s potential even during this dark time.

As it turns out, Kabemura’s faith in Tezuka was not misplaced. Not only was Black Jack a huge success for Weekly Shonen Champion, but it also ushered in a second wind for Tezuka’s career as he got back on his feet financially and artistically.

Black Jack might be one of the best manga Tezuka ever created, but it was also joined in this period by other masterpieces such as the short but seminal Message to Adolf, the religious epic Buddha, and the final, more experimental chapters of Phoenix.

The part that Kabemura played in the revival of Tezuka as an artist was recently put back into focus by The Untold Story: How Tezuka Created His ‘Black Jack’, which was serialized in Weekly Shonen Champion and later adapted into TV drama God’s Beret (Kami-sama no Bere-bou), which is why much discussion about the importance of Kabemura online seems to be limited to his role in the creation of Black Jack.

But, as I’ve outlined, we mustn’t forget the incredible impact that Kabemura had on the landscape of shonen manga as a whole; in funneling the anarchy of the early days of weekly serialization into the more measured method of editing and organization that we know today.

While the Weekly Shonen Champion that Kabemura worked so hard to bolster (even coming back for a second go in 1985) might not sit at the top of the manga world anymore, the success of its editorial method has had repercussions across the whole of the manga world.

Take, for instance, the latest issue of Weekly Shonen Jump. Within those 350-ish pages, you’ll find a wide variety of series, everything from action, sports, to mystery and romance, within which almost anyone can find something they enjoy reading (ideally three, obviously).

While it is true that Kabemura’s episodic philosophy seems to have gone out of fashion somewhat when considering the evolving narratives of such shonen epics as One Piece and NARUTO, we mustn’t forget how many other, perhaps lesser-known shonen series are largely episodic in nature, and that most younger consumers of shonen manga do tend to pick up series partway through the story, going back and reading the collected volumes if they want to catch up.

In this sense, while strict adherence to episodic storytelling may have faded in the modern era, many series still retain the aesthetic of episodic storytelling in order to entice budding readers by making each chapter the best it can possibly be. For example, almost anyone can pick up a chapter of Dr. STONE and enjoy how the chemistry and science work, regardless of the context.

So while Kabemura Taizo may have passed away in December 1998 (the year of my birth) his influence on the world of manga can therefore still be felt today, all those years later.

He can certainly rest easy knowing for sure that he was the best editor-in-chief in Weekly Shonen Champion history, but also with the knowledge that I and many others consider him to be the man who made shonen manga.

For more information on Kabemura Taizo, I’d recommend reading The Untold Story: How Tezuka Created His ‘Black Jack’ (or watching the drama) before diving into this very concise yet detailed history of the man by blogger Harada Takayuki (both Japanese only). Our translations of Comic Natalie’s Weekly Shonen Champion 50th anniversary collaborative interviews also offer some information. Work back from the latest here!