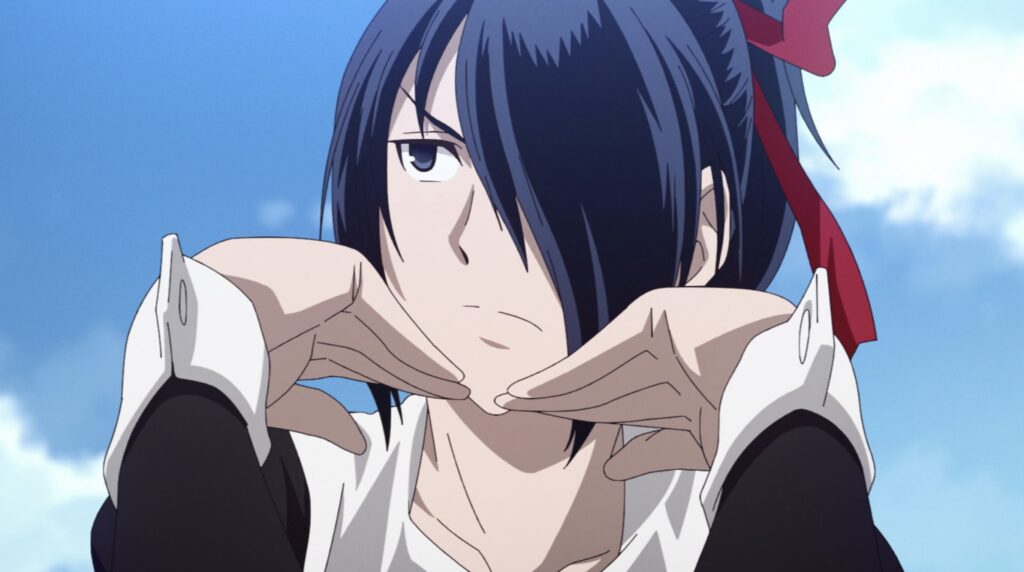 Ishigami has always been a character I found interesting, but not one that the show gave me enough of a reason to care about. Aside from the occasional appearance in a few gags and their otherwise-lingering presence, their involvement in the series has been minimal. The start of the school sports festival in episode 9 changed that, as suddenly Ishigami was thrust into the spotlight in a way they hadn’t before. As season 2 has progressed we’ve seen the character come out of their shell, and Kaguya-Sama episode 11 brings this to the forefront by confronting Ishigami’s past.

This episode is a culmination of Ishigami’s character arc for the entire series, as the character has slowly come out of their shell more and more and learned to look upon the world in a new way. Through this long build-up and the use of powerful framing to capture the torment and struggle Ishigami has gone through up until this point, this episode once again raises the bar for the series with an Impressive release of built-up tension. 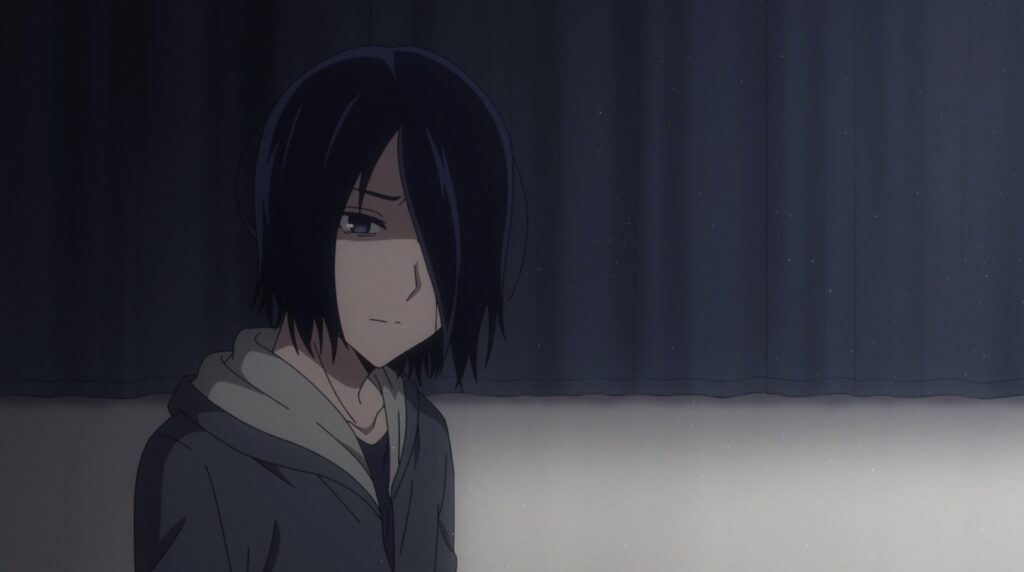 Starting in season 1 when the character was initially introduced and culminating with episode 11 of season 2, the events of this week’s episode of Kaguya-Sama feel like a culmination to every character interaction involving Ishigami up until this point.

Comparing Ishigami’s early introductions into the series as a shy, mostly silent junior in the student council whose role was mostly a mystery, he wasn’t even present for the first few episodes of the initial series despite being a part of the council. Even then, his silence was palpable, and the fear he felt for Kaguya which was mostly played for laughs became one of his most recognizable traits. 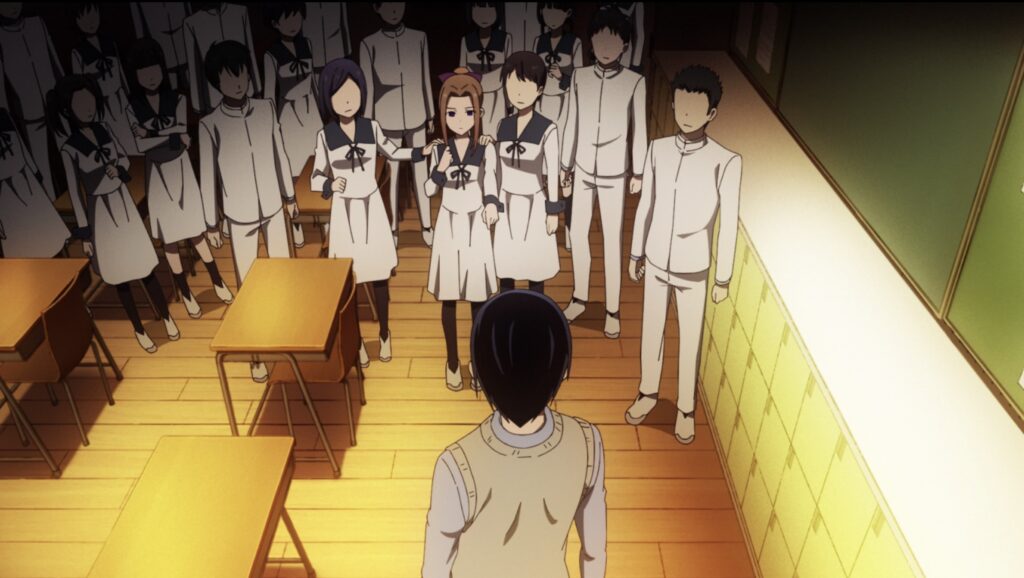 Over time, however, you could see them become more outspoken and stand up for themselves, and you saw their empathetic nature shining beyond his gloomy exterior. This particularly stood out during the student elections when he stood up for Miko Iino during that arc, showcasing an outspoken side that longed for justice that was mostly overshadowed before that point.

As he became more confident, the complaints and references to his past grew from a disgruntled student body. Their role in the dynamic of our main cast was shifting as the show attempted to retain its comedy while focusing on the romantic and human core of the show, and this needed a further examination. 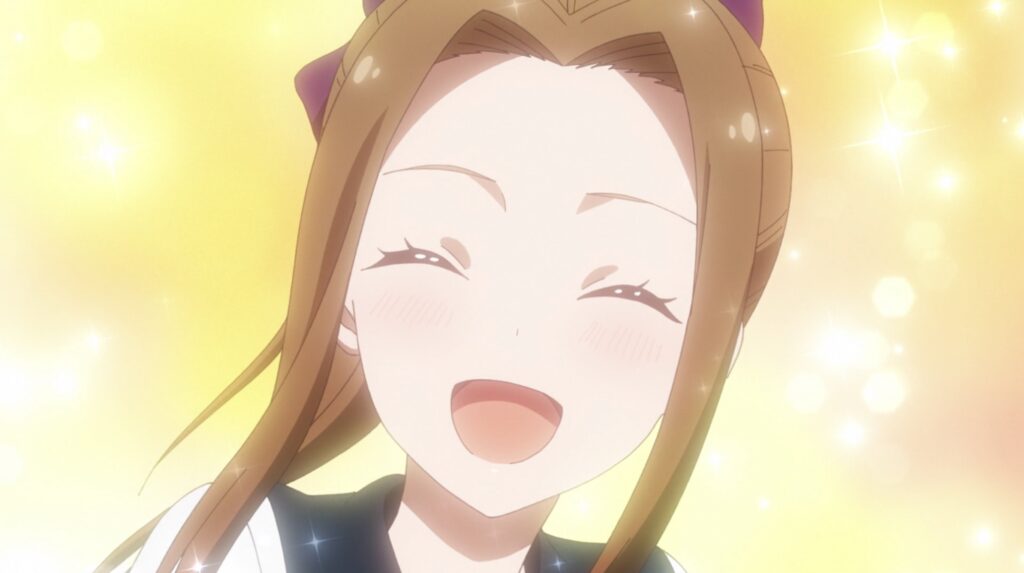 This all culminated in the story arc of these past few episodes of Kaguya-Sama season 2, coming to the forefront during this week’s episode. Here, the referenced event of Ishigami’s past that made him an object of derision and a social recluse is brought into the open, transforming him into a character more in line with Miko than it initially appeared.

This incident saw Ishigami stand up for a girl he liked during middle school whose boyfriend was cheating on her and acting sleazy. While mostly a silent boy at the time, he held a strong sense of justice and seeing this made him want to make things right. These attempts were turned against him instead, and he began to reject this stance. All standing up for the truth did was cause the world to push back against him, so why change anything? 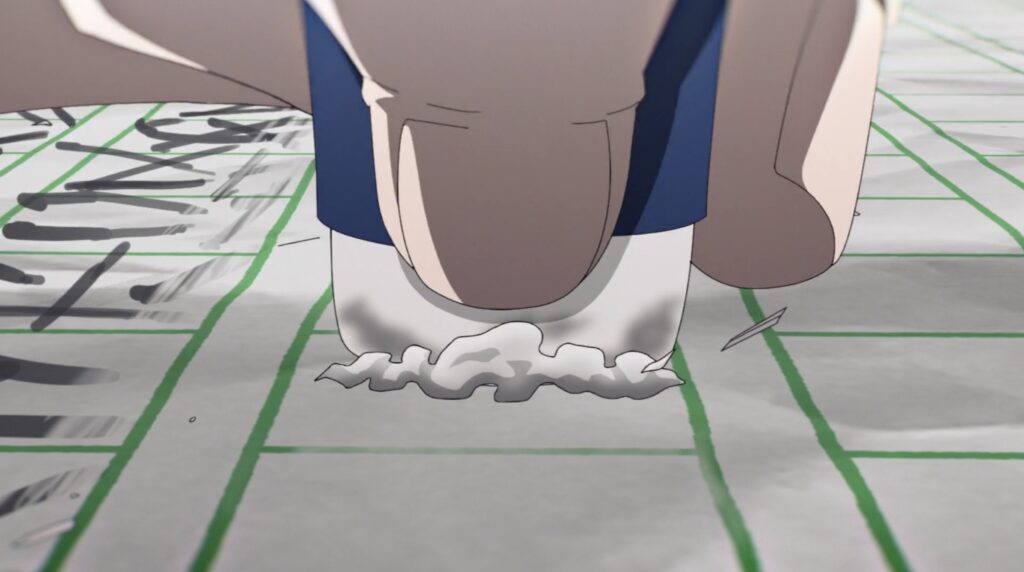 We’re placed into Ishigami’s mindset of social anxiety caused by the incident through intense framing of the incident that mimics the emotional state he was in at the time and its residual impact. Repetitive use of perspective shots (we’re in line with the rubber on the paper, or the feet as he runs) places us inside the mind of Ishigami as he becomes scared of the thought of having fun, of allowing himself to smile, of ever speaking up again after what happened before.

Yet we don’t just see pain through this perspective. In the same way, this perspective allows us to reconsider how much Ishigami has grown. As we learn of the events going on and are placed in his shoes, we begin to understand why he was scared of Kaguya, or why he was so withdrawn. Why joining the cheerleading club and allowing himself enjoyment was such a big deal. When this all comes together in the episode’s final scene, it’s hard not to feel emotional considering how much he’s been able to grow to allow that scene to happen at all. 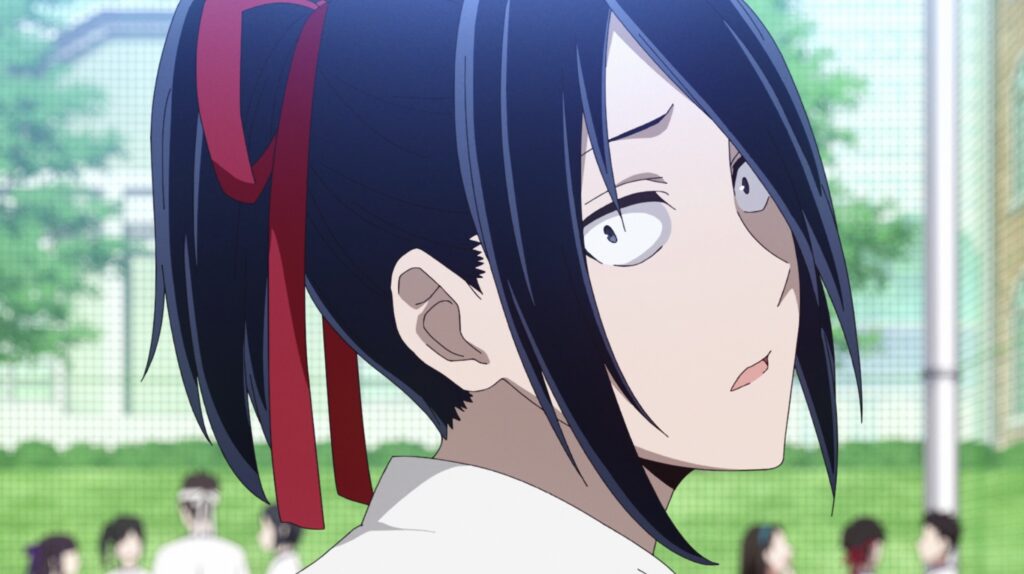 Kaguya-Sama episode 11 builds upon the story-heavy content of the rest of season 2 by saving its most sobering and serious episode for a side character’s confrontation with anxiety and bullying. Using the connection the audience has built over the preview few seasons, this works by forcing viewers to reconsider the actions of Ishigami from a new perspective. Miko Iino becomes the audience insert in this respect, as newfound respect is built between them through this growth.

The emotional payoff and release of tension are the strongest of the season so far. Even though I’ve said it before, this episode reminds me of why I love the Kaguya-Sama series as much as I do. It’s a shame, then, that next week will bring this glorious new season of the show to an end.