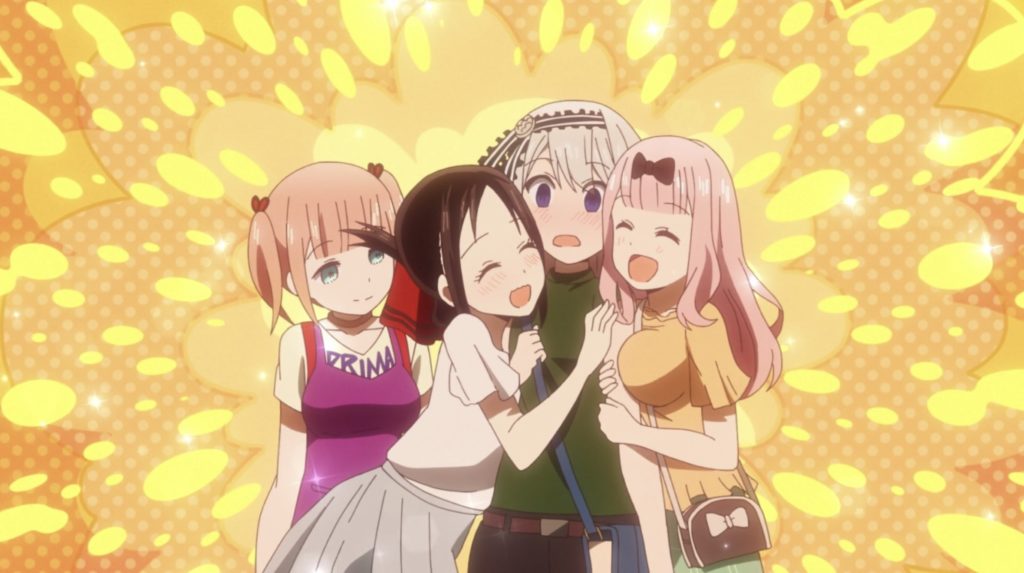 Kaguya-Sama: Love is War returned with a bang last week. Even with a few issues in how the series drops you back into the action without any sort of re-introduction, I was convinced this would be another great series for the romantic-comedy anime. Although the list of indefinitely-postponed anime grows, this is a show which, for now, is standing strong. Kaguya-Sama episode 2 doesn’t always hit the right notes as it delivers its signature brand of comedic mind-games, but you can bet I had a good time with this new episode of the season. 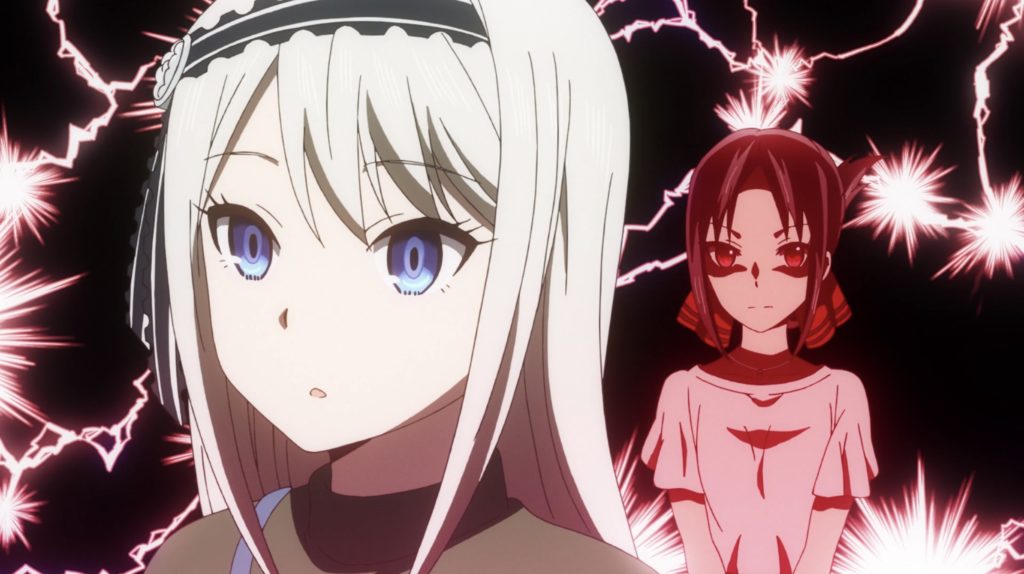 You know the coronavirus lockdown is messing with you when the establishing shots of an episode featuring Kaguya, Chiyuki, Miyuki‘s little sister Kei and new character Moeha getting ready to go clothes shopping in Shibuya make you wish you could do the same. This feeling was only a minor moment of reflection, and no sooner had the jokes come rolling in had I moved beyond this wistful longing for the great outdoors.

However, if I was being honest, this sketch is perhaps the weakest of the three short skits that make up Kaguya-Sama episode 2, and of season 2 of the anime so far. 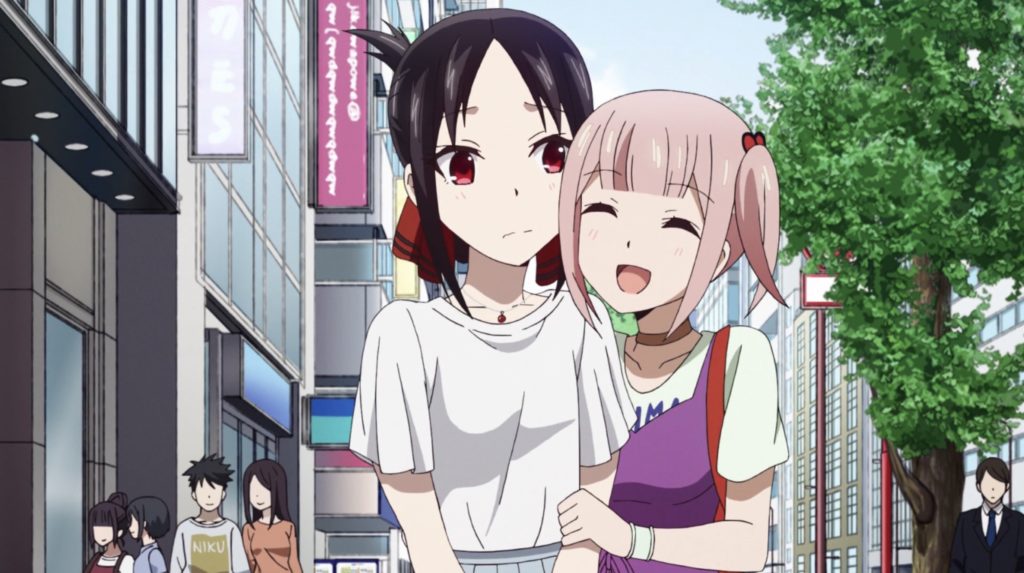 What I like most about episode 2 is the distinct through-line between these 3 very different comedic sketches that give the episode a story arc and character development while ensuring variety in the series’ strongest aspect, its humor. The first story sees Kaguya attempt to get close to Kei to learn more about Miyuki and work out a gift to buy for their birthday. The second story follows Kaguya’s indecision on Miyuki’s birthday as she’s unsure how or whether to give the present and cake she got for him, while the final story brings it all together with a battle of wits as they attempt to use Chiyuki to twist the events of the day before into a forced confession from the opposite party.

The first sketch, while enjoyable, unfortunately, feels like it mostly serves the purpose of setting up and enhancing the comedy in other areas of the episode, rather than being a strong sketch in its own right. The shopping sees Kaguya try and fail to get close Kei and fail since Chiyuki and Moeha never want to leave her side. Giving up and leaving to sit down, Kei joins her, and they become close and talk for the rest of the trip. The thing is, their attitude reminds them a lot of Miyuki, making it feel like a date, and the rest of the skit plays out in this fashion. 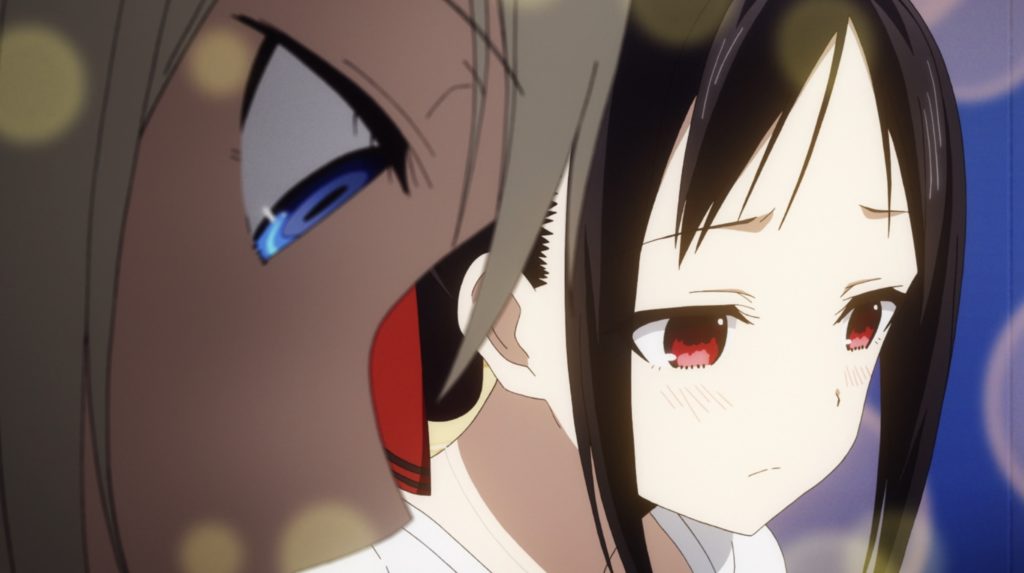 While there are some funny moments (the realization of a date and closing moments particularly), the rest feels padded and slow. It isn’t helped by the introduction of Moeha has mixed results here. I feel like this isn’t the best way to introduce them into the series, and giving them a central role for a few sketches would do a better job of introducing them as opposed to her randomly talking about how they want to lock people up in dungeons so they can’t escape.

The rest of Kaguya-Sama episode 2 is much stronger. The second story turns Kaguya’s mind games in on herself as the simple act of giving them cake and a present for their birthday turns into an internal courtroom with the defense, prosecution, and judge being played by multiple internal personalities. You have the love-smitten and the ice queen vying out for whether to give the cake over, and the setting and internal dialogue for something so mundane was superbly written. While the series is easily able to escalate its humor, I appreciate it when it steps down just as much, and a heartfelt ending for the story helps to wrap up the skit nicely. 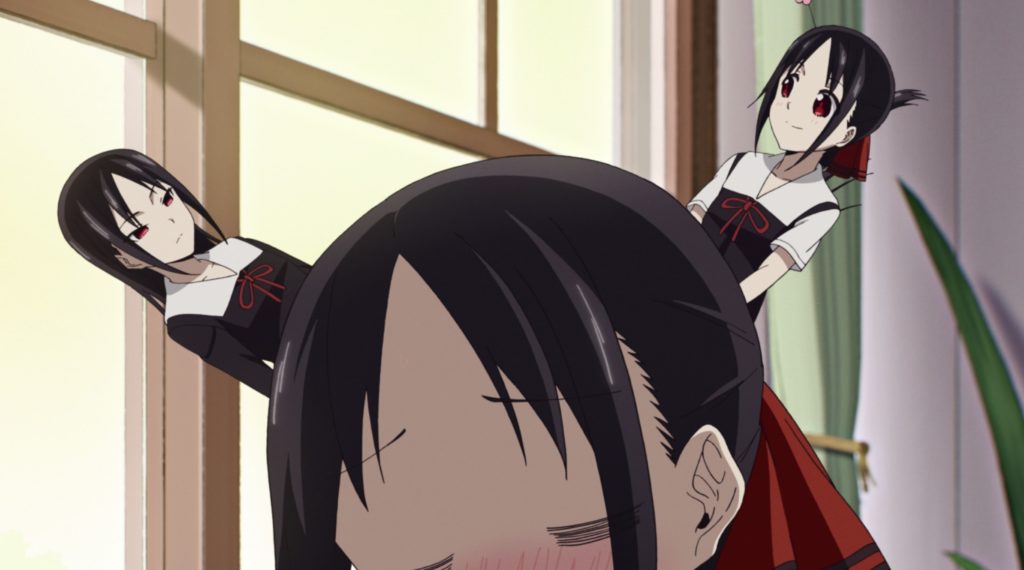 The final skit is mostly a comedown from the tension and release of this second skit, bringing Chiyuki back into the fold as she reacts to learning about the events of the night before. Here we see the mind games of the two characters in unison as both try to use the gullible Chiyuki as a way to force a confession from the other. It’s a similar tale to one we’ve seen the series employ before since the very first episode of last season, but when it’s such an effective structure that consistently brings a laugh, you can’t complain. Strong animation and some manga panel-inspired framing to emphasize the embarrassment these characters are feeling at any one time only work in the show’s favor. 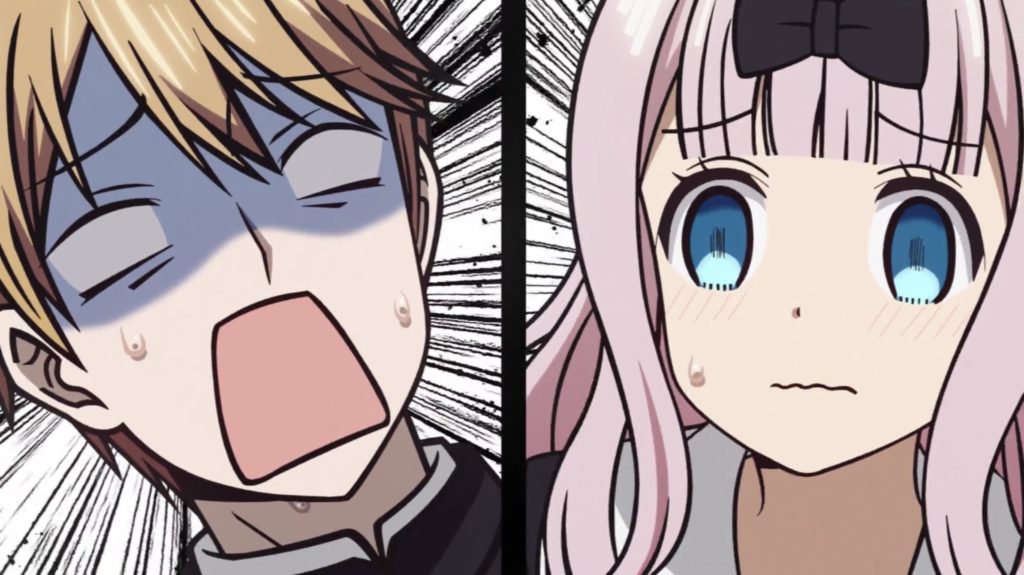 Kaguya-Sama is an anime we need right now: a strong comedy with interesting characters and great animation that only serves to enhance the show’s exaggerated sense of humor. Even if the first sketch in this episode didn’t quite hit the mark, the episode as a whole was still a very enjoyable experience, with the feelings of attraction only deepening throughout these three inter-connected comedic sketches.