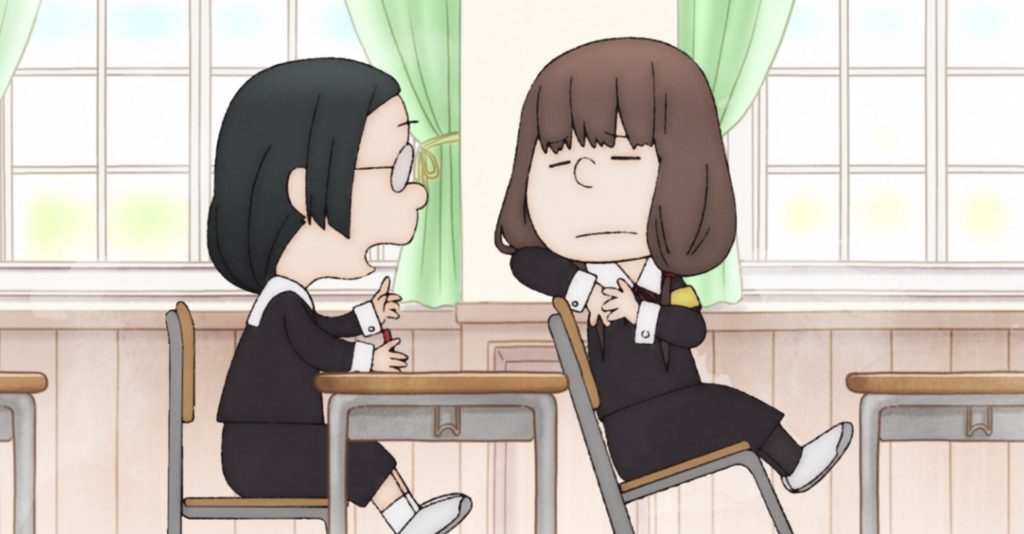 Kaguya-Sama: Love is War season 2 has sought to showcase this almost every week since its premiere, yet I feel it is here with episode 9 where we see the malleability of the series put on display to full effect. The show has always been able to showcase variety and the inherent quality of its source material, yet I feel this episode is the one which best expresses the show’s unique voice.

While retaining everything that makes the anime a consistent highlight of my week, this episode sends the series through a metaphorical blender, with almost every visual and conceptual style used as an experimental showcase of what the show is able to offer as it prepares to enter yet another entertaining story arc. 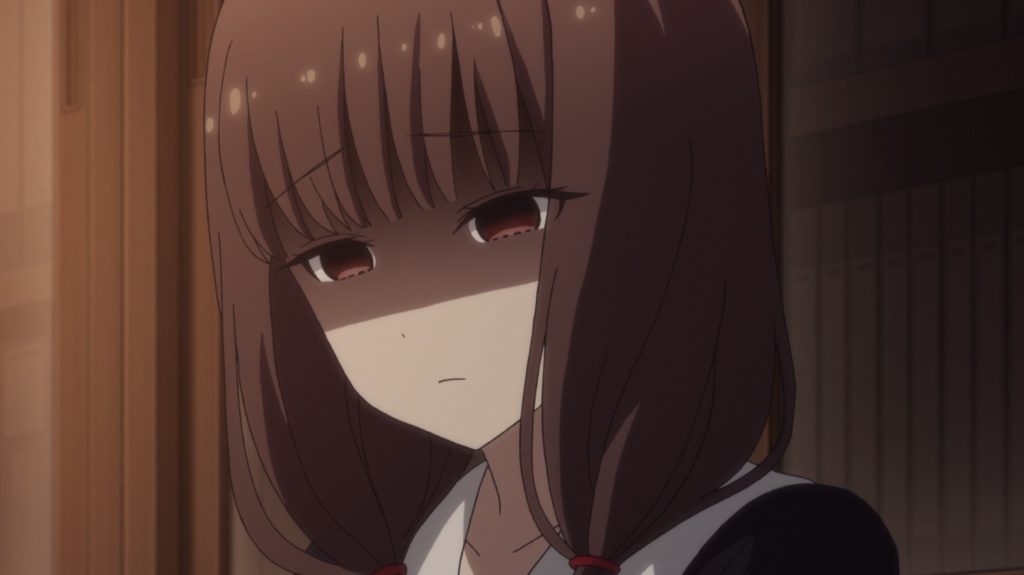 Miko Iino is ready to quit, and who could blame her. The victim of awkward timing, her lifelong dream of being a part of the student council has descended into a nightmare after repeatedly walking in on Kaguya and Shirogane in increasingly compromised positions. Walking in on the pair close to kissing in the locked storage cupboard may have sent Kaguya through the motions last week, the event appears to have scarred their upstanding junior.

It’s against this backdrop that episode 9 undergoes the most expressive visual storytelling we’ve seen so far in Kaguya-Sama season 2. Although this doesn’t have the purpose of advancing a central narrative, it guides us through the journey of Iino’s inner thoughts and her overactive imagination at the truth behind their relationship in a humorous style the staff use to their advantage.

With the perspective shifted to Iino for this first section of the episode, it’s nice to see the entire framing of these scenes and their composition shift to match this change in perspective. While not a complaint I’ve had with the series until this point due to its ability to enhance each skit with a flair that only the medium of animation can provide, many comedic sketches have typically not strayed too far from the manga’s influence. This isn’t a bad thing as the comedy is strong, utilizing the medium to enhance the jokes the manga provides, but it is noticeable.

Though I don’t think this style needs to change going forward, the anime uses this established style by innovating and experimenting upon it through new lighting and framing to enhance this skit. The show previously used this ability to adapt its style to emphasise certain scenes through the scope of the student council election, so it’s nice to see it used here as well.

Just as her imagination comes to life, so does the world around her. A much greater use of space and surroundings sees greater levels of camera movement and 3D environments that only serve to enhance her delusions. In fact, by contrasting it to the flatter, more stylized presentation of most episodes, this cinematic flair only emphasizes how delusional the ideas she’s concocted are, all while allowing for the team to have the freedom to experiment. Naoya Nakayama is able to do this in one particular take that transforms Fujiwara into an angel of salvation.

The range of references in this skit only elevate this by bringing a smile from the audience while affirming that this is the conception of Iino’s imagination. It’s a wonderful piece of expressionism that uses the show’s concept to have fun with the world and characters featured in Kaguya-Sama season 2 in a way we haven’t seen to this extent before episode 9. 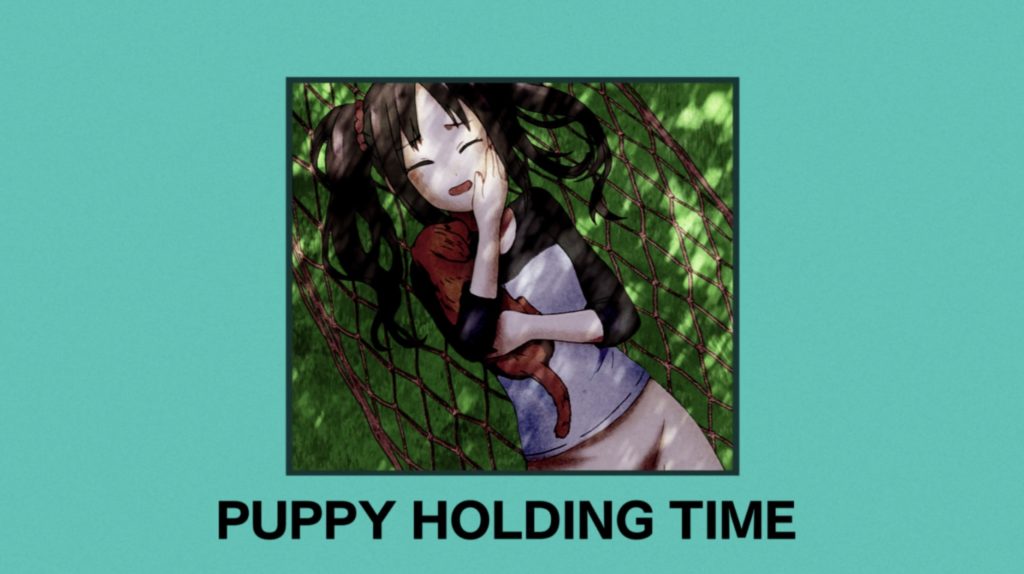 While the rest of the episode doesn’t reach this level of visual variety and expressionism, we do see the show’s creative flare surface through the way the anime chooses to handle Kaguya’s nervousness around Shirogane following their near-kiss. Uncertainty on how to act around him activates her fight-or-flight mechanism that sees her flee the room whenever he’s nearby, making it necessary that Hayasaka trains her to become more comfortable around him. Even the explanation of sports psychology is enhanced through a visually exciting sports montage, an impressively-animated dance sequence and references to popular music through the ways in which dancing allows Kaguya to find her calming mechanism to deal with the situation.

The biggest return to standard fare comes at the episode’s climax in the way it sets up the student sports day story arc. Here, also, the show is willing to use the space of the school and hallways to intensify feelings of uncertainty and doubt that sow the seeds for a story arc set to commence next week. Ishigami receives the spotlight here, as he contradicts his asocial personality by volunteering for the cheerleading squad. The skit is mostly standard fare, but what I appreciate about it (and what, in turn, elevates it) is the way it probes into this under-utilized character’s personality while promising to further explore it in the coming weeks.

As he crossdresses with Kaguya’s help, you see his warming to the idea of competing and his ability to accept the help of others and see different sides to people. I hope this is explored further. 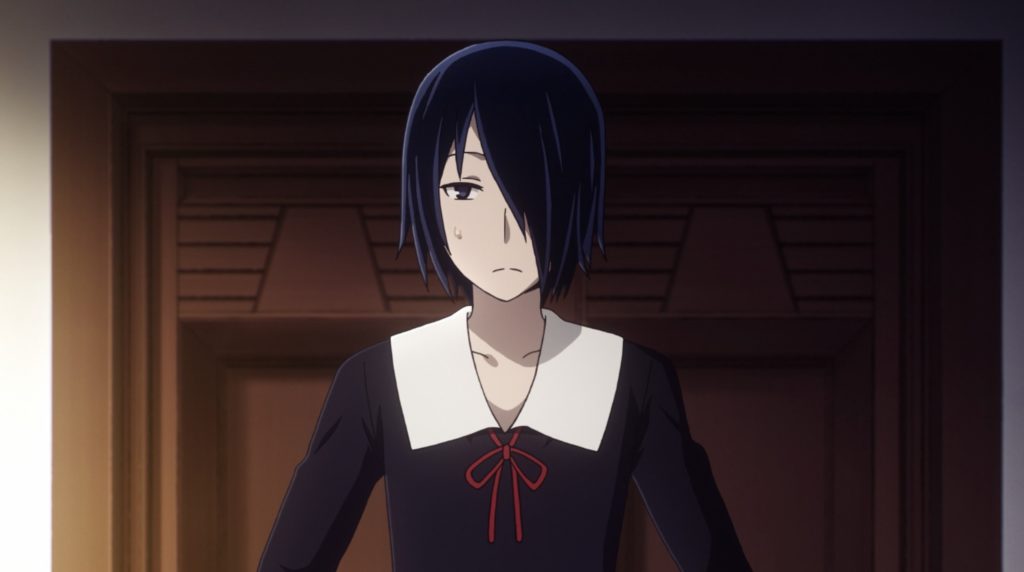 Kaguya-Sama: Love is War season 2 episode 9 is, on the surface, business as usual. Instead, the creative team behind the show use it as a chance to expand the visual language of the anime and have fun with the show’s visual style, all while embracing the thematic core of the episode while doing so.

Ishigami‘s story kicks off the anime’s second story arc, and what will likely be the final arc of this season of the anime, the sports festival arc. While continuing to develop the main relationship, this promises to focus a lot more on both Iino and Ishigami. If this episode is anything to go by, I’m excited to see how that turns out.