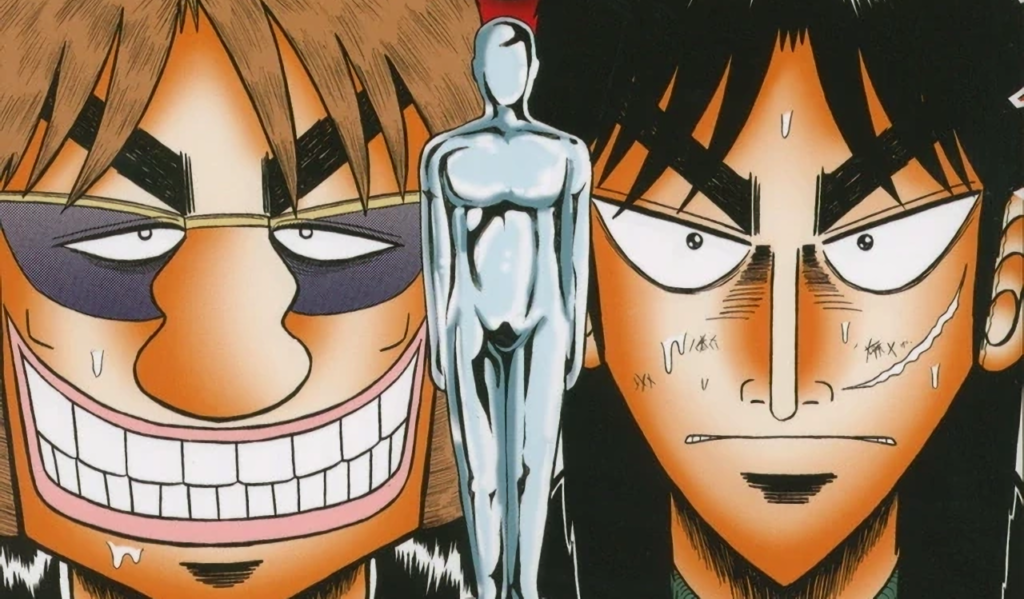 On the year of its 25th anniversary, most of the conversation surrounding Nobuyuki Fukumoto’s iconic gambling series Kaiji is tragically limited.

Undoubtedly, this is partly because only the first two parts of the manga have been adapted into animation. Studio MADHOUSE never returned to the series past 2011, bar the Mr. Tonegawa spinoff in 2018. The lack of availability for the original manga also only complicates the matter further: for a long time, it wasn’t licensed in English, but even the current Manga Planet and DENPA releases haven’t gone beyond the first part as of the time of writing. As a result, much of the series is essentially off-limits for English-speaking audiences.

Nevertheless, the fact that we are sat here talking about the 25th anniversary of Kaiji should make it pretty clear that there is far more material out there. Much like its gambling-obsessed protagonist, Kaiji has never once stopped moving forwards and reaching ever greater heights: if the conversation is contained to its first two parts, then this doesn’t even begin to scratch the surface of what makes Nobuyuki Fukumoto’s series so great.

Luckily, the Kaiji 25th anniversary offers us a golden opportunity to reflect on this.

One Crucial Character: Kazuya Hyoudou and His Influence

There are plenty of things that anime-only fans of Kaiji miss out on, but perhaps the most crucial is the character of Kazuya Hyoudou. Originally introduced in the third part of the series Tobaku Datenroku Kaiji (Gambling Outcast Kaiji), he’s the son of Kazutaka Hyoudou: the president of the powerful and infamous Teiai Group.

One of the most obvious ways that Kazuya adds to the story is by becoming a new, more accessible antagonist. Although Nobuyuki Fukumoto has crafted several impressive villains for Kaiji to face over the past 25 years, the elder Hyoudou was always the most formidable. Nevertheless, the two characters already faced off at the end of part one, so engineering another confrontation between them would have been difficult: with this in mind, Fukumoto’s desire to create a new antagonist on the same level as Kaiji but equally as twisted as Kazutaka is plain to see.

Even so, this isn’t the only thing that Kazuya brings to the table. At the heart of his and Kaiji’s rivalry is fundamentally a different outlook on human nature. Throughout his entire life, people have attempted to get close to Kazuya on account of his father: consequently, he views all humans as liars and cheats, desperate to do anything to get ahead. Kaiji, meanwhile, understands what it means to be down on your luck and why people make such duplicitous decisions.

In the fourth part of the series, Tobaku Datenroku Kaiji: Kazuya-hen, Kaiji and Kazuya put their differing viewpoints to the test in a twisted spectacle known as the ‘Salvation Game.’ The fifth part of the series, Tobaku Datenroku Kaiji: One Poker-hen, also sees them go head to head in a high-stakes gamble, so he’s clearly a big figure in the fabric of the Kaiji series on the year of its 25th anniversary.

My heart goes out to any fans of the series who do not know his unique brand of charm and worldview.

The Complexity and Variety of Nobuyuki Fukumoto’s Work

Another thing that anime-only fans miss out on is the sheer amount of gambles that Kaiji has explored over the past 25 years. The first two parts have Limited Rock Paper Scissors, Human Derby, E-Card, Chinchiro and The Bog, but there’s far more to uncover. What’s more, each one of them reveals just how accomplished Nobuyuki Fukumoto is as a storyteller.

In part three, for example, Fukumoto pulls on his years of experience with Akagi to deliver a unique game of modified mahjong that even the uninitiated can enjoy. Part four doesn’t even revolve around a gamble, instead taking the form of a survival game like the Human Derby. And you haven’t seen poker quite like the kind in part five, that’s for sure.

Perhaps one of the greatest examples of Kaiji’s versatility is the series’ latest, sixth part. Titled The 2.4 Billion Escape Arc, it picks up right after Kaiji wins the colossal prize pool from Kazuya in the One Poker arc. Confronted with the problem of trying to transport his winnings and evade the capture of agents sent by Teiai, this isn’t even really a gamble once again, instead managing to conjure up images of classic fugitive movies with its close calls and identity swaps. It’s also still ongoing, so who knows how things will turn out.

Beneath the surface level, meanwhile, the sheer variety of Kaiji’s gambles over the past 25 years has allowed Nobuyuki Fukumoto to further develop his ideas on class society and inequality. The anti-establishment flavor of the series was evident right from the beginning thanks to the Teiai Corporation, but that doesn’t go away in subsequent parts. Rather, the past 25 years have seen Fukumoto deal more explicitly with the haves and have-nots, often to fantastic results.

Two of the ‘Asian Trio’ that are introduced in part four, for example, add an international dimension to Kaiji’s deeper ideas. Chang was a victim of China’s one-child policy and was sent away from his parents to live and die in the countryside, while Mario also grew up on the trash heaps of the Philippines, literally digging through mountains of landfill in order to make a living. Both make their way to Japan as a land of opportunity.

Considering how underappreciated migrant labor is in the Japanese economy, this is quite a significant narrative choice. Itou Kaiji himself, meanwhile, is still presented as the quintessential pariah and only manages to break through the oppressive structures of society through tenacity and sheer dumb luck.

When Will Kaiji End?

That being said, many characters have warned Kaiji repeatedly that his good fortune will run out at some point. The fact that he keeps returning for more and more high stakes gambles suggests that he is actually addicted, regardless of what he says about ‘flow’ and having it on his side. In many ways, what his fate turns out to be will ultimately dictate the entire tone of the series and its core thesis.

Linked to this is the question of when the Kaiji series will end. Right now, Fukumoto is serializing the third arc in the Tobaku Datenroku Kaiji story, even though they are usually referred to as different ‘parts.’ It’s hard to imagine another series following up on this, mainly because the stakes are already ridiculously high.

Regardless of when and how the Kaiji series comes to an end, however, Nobuyuki Fukumoto’s work will stand tall. Arguably, it will shake out as his most impressive achievement next to Akagi, which explored a marathon ten-year mahjong match in and of itself. Nothing in Kaiji ever stretched that long, but reaching a 25th anniversary is no small feat.