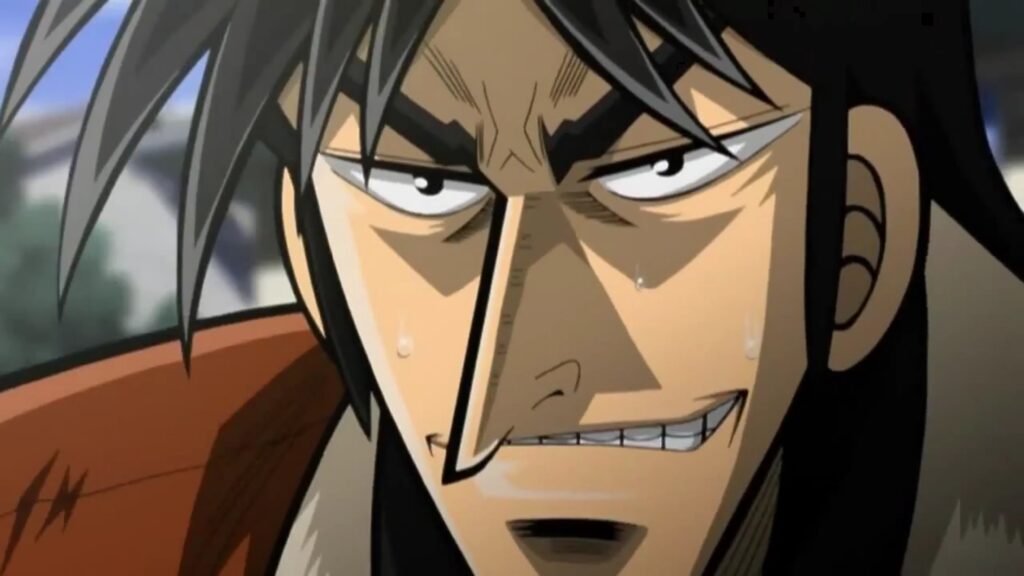 Let’s face it, scams are interesting. No one likes being the victim of a swindle, but we like dissecting them and learning about what makes them work because it takes a really clever scam to be successful.

As this reigns true in our everyday lives, it goes doubly so for Kaiji – an anime and manga series that goes out of its way to come up with the most ludicrously elaborate scams in the form of gambling contests and constructs an over-the-top drama around them.

The series started as a manga series published in Kodansha’s Weekly Young Magazine, a manga anthology similar to Shonen Jump although targeted at an older demographic. The Kaiji series is written by Nobuyuki Fukumoto, a manga author known for a few distinct signatures.

His characters tend to have facial features composed of simplistic shapes that highly exaggerate intense emotion and tension. He also tends to enjoy writing about shady dealings, yakuza-type figures, and clever protagonists who are tasked with deciphering the plots of criminal masterminds and working out a way to beat them at their own game.

In the inaugural story arc of the tale, the full title of which is Gambling Apocalypse: Kaiji (Tobaku Mokushiroku Kaiji), Kaiji Ito is an unemployed slacker who is tricked into participating in a “gamble” on a cruise ship by the mob in order to pay off a bogus debt.

He soon finds out that the gamble is more than he bargained for, and must match wits with his fellow passengers in a high-stakes card game base of Rock, Paper, Scissors with a deceptive set of rules.

This is only the beginning for our protagonist though; as he makes new friends and outwits high ranking figures in the criminal underworld, he faces new gambling games with their own hidden secrets and engages in psychological warfare with criminals of unparalleled legendary stature within the underworld.

The manga has been running for over twenty years at this point, having started back in September of 1996. The title often resurfaces amongst trending manga from time to time when a new story arc begins with fresh chapters to bring back the old fans, and attract new ones.

How Many Story Arcs of the Kaiji Manga are There Thus Far?

The manga is broken up into story arcs, the first three of which are 13 chapters long each. There are three additional ‘parts’ of varying lengths to the manga, which follow a 4th story arc, the last of which has yet to have been completed as of early 2020.

The first series as mentioned previously is called Tobaku Mokushiroku Kaiji, or Gambling Apocalypse Kaiji in English. It sets up the story for the series and introduces several characters and the antagonists which are recurrent throughout the entire series, who operate under the mysterious Teiai Corporation.

This arc is broken into two main parts: The Espoir, where Kaiji partakes in the “Restricted Rock Paper Scissors” gamble, and the Starside hotel, where Kaiji challenges the “Electrical Current Steel Frame Crossing”, “E-Card”, and “Tissue Box Raffle” gambles.

The second story arc is Tobaku Hakairoku Kaiji aka Gambling Maverick Kaiji (or sometimes Kaiji: Against All Rules), which follows Kaiji’s descent into an underground labor camp after his losses at the end of the first arc.

While stuck there, he faces the foreman in a gamble called “Underground Chinchiro” to earn enough currency to buy his freedom for a period of time long enough to pay off his debt and depart from the labor camp permanently.

The second half of this arc pits him against the infamous Bog, a dubious pachinko machine boasting an extravagant jackpot. He has a limited period of time with which to outsmart the suits at the gambling parlor and the mastermind behind the Bog so he can take it down and claim the jackpot for his own.

Next, we have the Tobaku Datenroku Kaiji, or Gambling Advent Chronicle Kaiji arc, which focuses on a mahjong related gamble,” Mine Field Game ‘17 Steps’”. Fukumoto’s other tremendously popular manga series, Akagi: The Genius Who Descended Into Darkness (Akagi: Yami ni Oritatta Tensai) is another series that follows a protagonist somewhat similar to Kaiji Ito who faces off against deceptively tricky mahjong opponents.

This arc in the story is a callback to Akagi in some ways, but with an alternate version of mahjong that has the standard twist we’ve come to know applied to it.

From this point on, the Manga maintains this title as it moves on into additional parts, but adds a subtitle to subsequent new sub-arcs. Tobaku Datenroku Kaiji: Kazuya Hen (Gambling Advent Chronicle Kaiji: The Kazuya Arc) introduces a new main antagonist, the son of Teiai Corporation big boss Kazutaka Hyoudou, Kazuya Hyoudou, with two gambles: “The Sword is Mightier Than Love”, and “The Salvation Game”, which follow the theme of trust amongst companions.

He is forced to gamble with his life on the line, upping the stakes once again. In Tobaku Datenroku Kaiji: One-Poker Hen (Gambling Advent Chronicle Kaiji: One Poker Arc), Kaiji and Kazuya face off once again in a warehouse at a poker-related gamble, ”One-Poker”, with similarly high stakes. Following the resolution of this arc is Tobaku Datenroku Kaiji: 24 Oku Dasshutsu Hen (Gambling Advent Chronicle Kaiji: 2.4 Billion Escape Arc) which deals with the aftermath of Kaiji’s previous gambles with Kazuya.

As of early 2020, this arc is currently ongoing with 6 completed books and dozens of chapters that have not yet been compiled into Tankobon.

What Story Arcs Does the Anime Feature?

In 2007 (airing from October, til April of 2008), the first story arc of Kaiji was adapted into the anime, Gyakkyou Burai Kaiji: Ultimate Survivor. This 26-episode series is basically a direct port of the events that happen within the 13 volumes of Gambling Apocalypse Kaiji. The first nine episodes deal with the events leading up to the Espoir and the “Restricted Rock Paper Scissors” gamble.

The remaining episodes deal with Kaiji’s Showdown at the Starside hotel. Gyakkyou Burai Kaiji: Ultimate Survivor was animated by Madhouse, and is very well-paced and accurate to the manga, taking up roughly two episodes of anime time per one volume of the manga.

A second season of the anime aired in 2011 under the title Gyakkyō Burai Kaiji: Hakairoku-hen, once again animated by Madhouse and once again following the 26-episode full-season format.

As the name implies, this series is another direct adaptation of the second manga arc, following Kaiji’s exploits in the underworld, and his thrilling battle against the Bog pachinko machine. The opening theme is Chase the Light! performed by ‘Fear, and Loathing in Las Vegas’, and the ending theme is C Kara Hajimaru ABC performed by Wasurarenneeyo.

Although a Season 3 of Kaiji has never been formally announced, it was teased following the completion of Gyakkyō Burai Kaiji: Hakairoku-hen. Many years have passed since then with several entire story arcs of manga being completed since yet no new word on any adaptations.

However, in 2018, a spin-off series based on Tonegawa, one of Kaiji’s nemeses who mainly appeared in the first story arc of the anime and manga aired under the title Mr. Tonegawa Middle Management Blues (Chuukan Kanriroku Tonegawa), adapted from the manga series of the same name. The manga series is not written solely by Nobuyuki Fukumoto, but rather by Tensei Hagiwara in collaboration with Fukumoto. The anime was also animated by Madhouse and features 24 episodes.

Compared to the anime, much looser live-action adaptations of the title have been produced as feature-length films.

The first film, titled Kaiji: Jinsei Gyakuten Game (official English title, Kaiji The Ultimate Gambler, was released on October 10th, 2009 in Japan, and is loosely based on the events in the first story arc of the Manga. Starring as Kaiji is Tatsuya Fujiwara, a Japanese actor who has starred in numerous live-action film adaptations of popular anime series such as Erased and Death Note: Light Up the New World.

Opposite of Fujiwara in the role of Tonegawa is Teruyuki Kagawa, a well-known actor who has appeared in many popular Japanese Movies and Television Dramas, including the recent highly popular 99.9% Criminal Lawyer. The film grossed around 25 million dollars worldwide to mixed but positive reviews.

Kaiji 2: Jinsei Dakkai Game (Kaiji 2: The Ultimate Gambler), released in 2011, roughly follows the events in the manga that correspond to the Bog pachinko machine from the anime and manga, though the story is changed a bit.

Fujiwara and Kagawa reprise their roles from the first film and must team up in order to defeat the bog, joined by others who all must put their lives on the line. Kaiji 2 was met with a similar reception to the first film.

Interestingly, the release of both seasons of the Kaiji anime roughly corresponds to the same time at which the films were being promoted, so that they could generate advertising and marketing off of each other. However, there is a 3rd Kaiji film, Kaiji: Final Game, released on January 10th, 2020.

There was no 3rd anime season paired with this film, possibly due to the fact that the story of Kaiji: Final Game is its own thing, featuring four new gambles: “The Tower of Babel”, “Final Judgement”, “Dream Jump”, and “Golden Rock Paper Scissors”. As the film is brand new, there has not been an English language release of it yet, but one will likely come in the future following suit of the first two films.

There is also a Chinese film, Animal World, which is available for streaming on Netflix with English subtitles. Animal World is essentially another version of the events that happened on the Espoir in the first story arc of Kaiji, but not actually related to Kaiji in any way. It is a much higher budget production than the three Kaiji films, even featuring a completely out of place cameo from Michael Douglas as the antagonist for some reason.

Entertaining in its own right, but it would probably be better if we got more seasons of Kaiji anime, which translates flawlessly, as opposed to directly related live-action films and or bizarre films that are based on Kaiji which don’t feel like they work quite as well due to the surreal nature of some of the content in the original work.

There is plenty of manga to adapt to future anime seasons, and the ones that have aired have done so with overwhelmingly positive feedback. As it stands, many of us Kaiji fans would happily gamble on there being more Kaiji related anime in the future, and with any luck, we will come out as big winners.