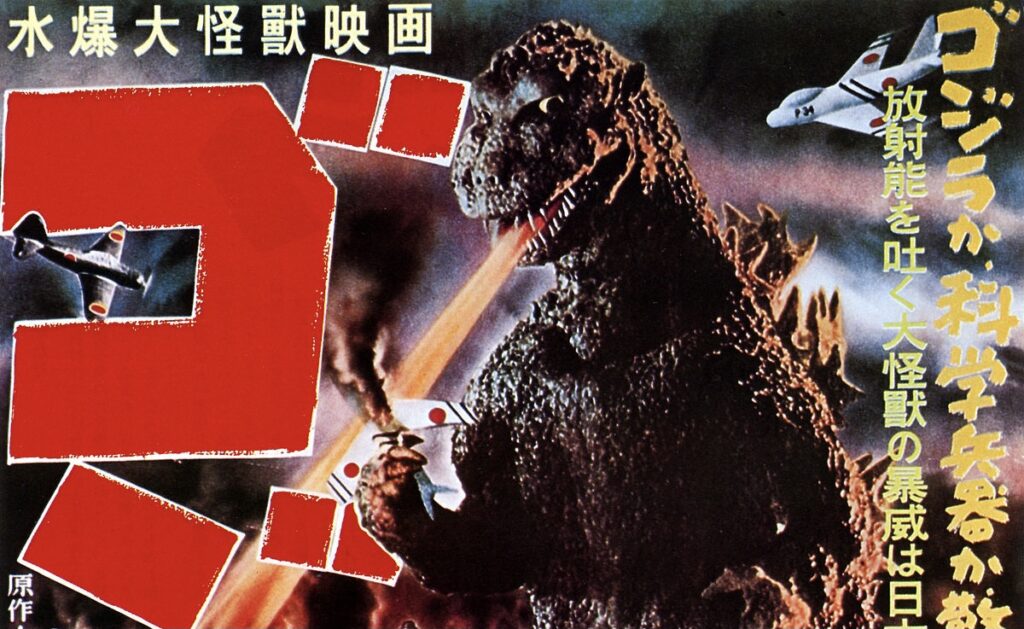 The kaiju genre has endured through most of Japan’s post-war cinematic history thanks to a level of versatility and malleability that allowed the genre to adapt itself to whatever topic or theme was asked of it. At the center of this idea is the iconic character of Godzilla, a creature inspired by those who came before it and a character who birthed the kaiju genre and has had an unavoidable influence on cinema both in Japan and around the world in the years which followed.

An understanding of the history of kaiju films can, to an extent, help us to understand Japanese post-war attitudes throughout 20th and 21st century Japan, providing a window into how the country views itself by representing Japanese attitudes on screen. However, to first understand the kaiju genre, we first need to understand the origins and impact of its most recognizable mascot. 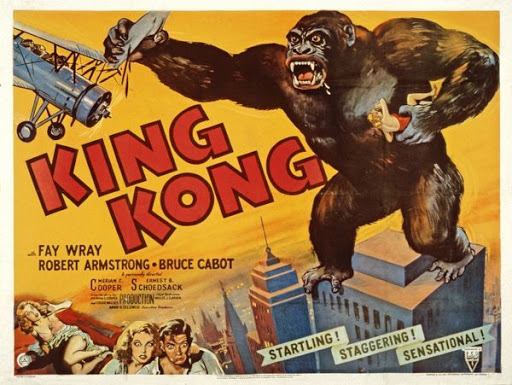 To discuss Godzilla, you first need to discuss King Kong. A titan (literally) of American cinema, this 1933 Hollywood classic may show its age today due to its rather heinous run-ins with racist and misogynistic ideas, yet it’s easy to see why the film was so influential upon its release.

Especially for a film made in the first half of the 20th century, King Kong is created with a sense of scale that helps the movie easily stand out among its peers released around the same time. Even as films following a structure where a group of explorers journeyed through an undocumented wilderness, finding perilous new forms of life in the process, had by this point proven to be a lucrative Hollywood formula, this movie felt unique and fresh within the genre thanks to its technical innovations.

Story-wise, King Kong sticks close to this tried-and-tested formula, with King Kong being discovered on an island where a native tribe lives alongside the creature, as a crew attempts to shoot a movie. Acting against the warnings of the tribe, the crew takes it back to New York for exhibition, where it wreaks havoc, falls in love with an actress on the expedition, and eventually gets killed. 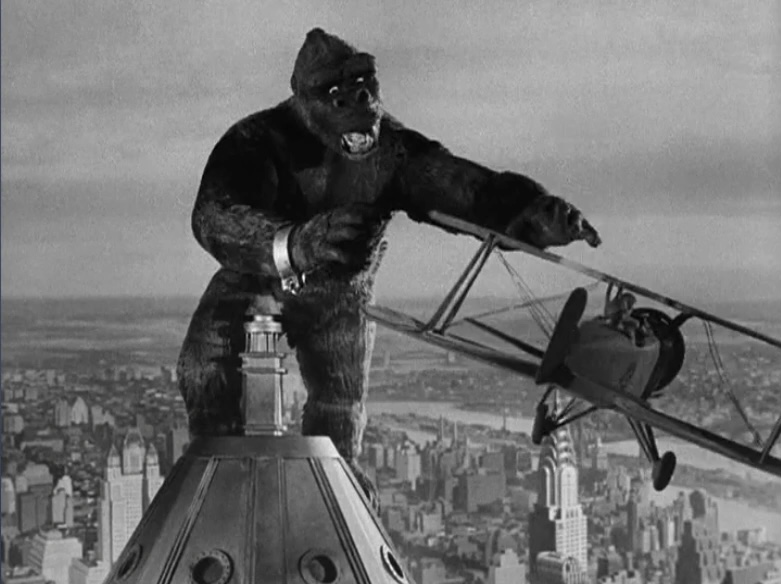 The special effects used to bring King Kong to life through the use of stop-motion were unheard of at the time, and while primitive, they stand the test of time as an impressive technical achievement and propelled it to unprecedented box office heights. King Kong’s success was felt in Japan, too, thanks to the film’s release via Shochiku Studios, with unofficial King Kong films in the form of Wasei King Kong (a silent comedy using King Kong in its storyline) and King Kong Appears in Edo (produced by Zensho Cinemas and features a character known as King Kong with little resemblance to the titular character) following it to capitalize on the film’s success. Unfortunately, both films have been lost to time, but they do showcase the success of King Kong and monster films in the country.

While the effect work and commercial success of King Kong was certainly influential on the creation of Godzilla from a technical standpoint, it was another film and moment in history that serve as the main inspirations of the original 1954 film, and the kaiju genre more broadly.

How Godzilla Transformed Monster Movies and Created the Kaiju Genre 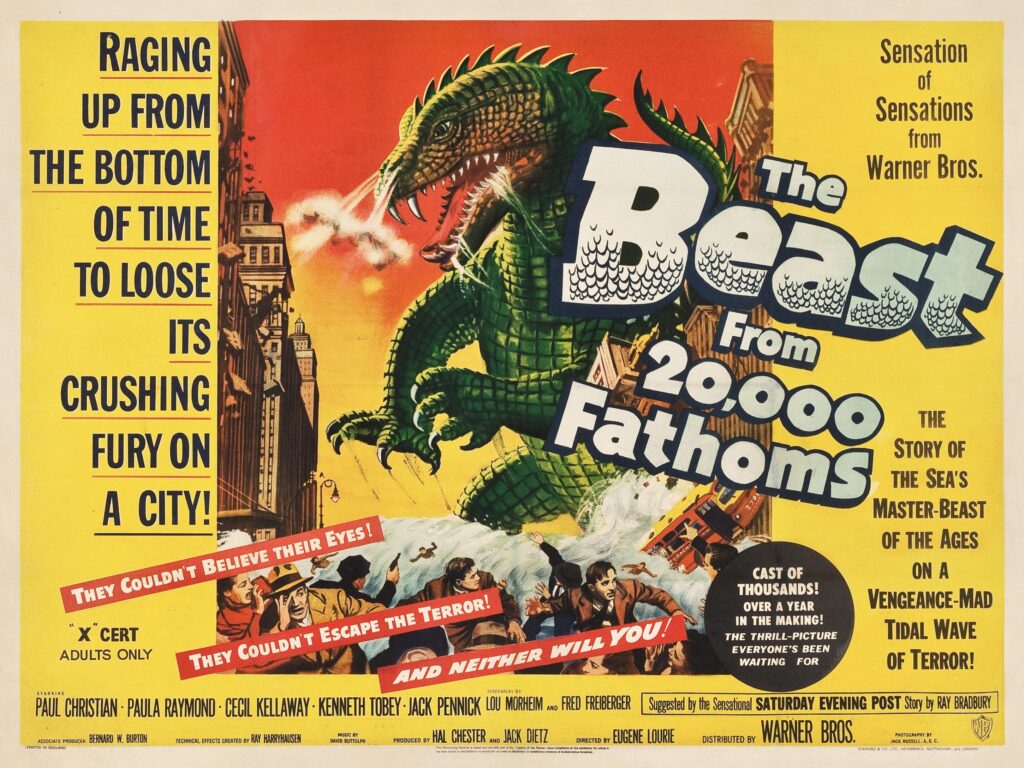 Many aspects of the creation of Godzilla and the kaiju genre are well-worn, well-understood facts by this point. It’s relatively known that Ishiguro Honda’s giant monster film was inspired by The Beast From 20,000 Fathoms, an American giant monster film about the fictional Rhedosaurus that wreaks havoc on New York City, having been freed from hibernation under Arctic ice because of a nearby nuclear test, and the Daigo Fukuryu Maru Incident that occurred in March 1954. The latter saw the crew on the so-named fishing boat contaminated by nuclear fallout because of a US nuclear test.

In fact, the film was greenlit thanks to the roaring success of The Beast From 20,000 Fathoms in Japan, and the success of the 1952 re-release of King Kong in cinemas that beat out the film’s initial box office run in the country. Yet despite these inspirations, Godzilla has far more in common with war films discussing Japan’s collective postwar reconciliation with World War II than these monster movies. First the tone of Godzilla is far more sobering when placed alongside these rather dramatic American monster films, keeping the monster in the film’s periphery for much of the runtime, aside from brief glimpses of the creature starting from roughly 22 minutes in, and then in the final act. Second, the film’s messaging is much more centered on the creature’s creation, origins, and what it represents, as opposed to the havoc and destruction it has caused. 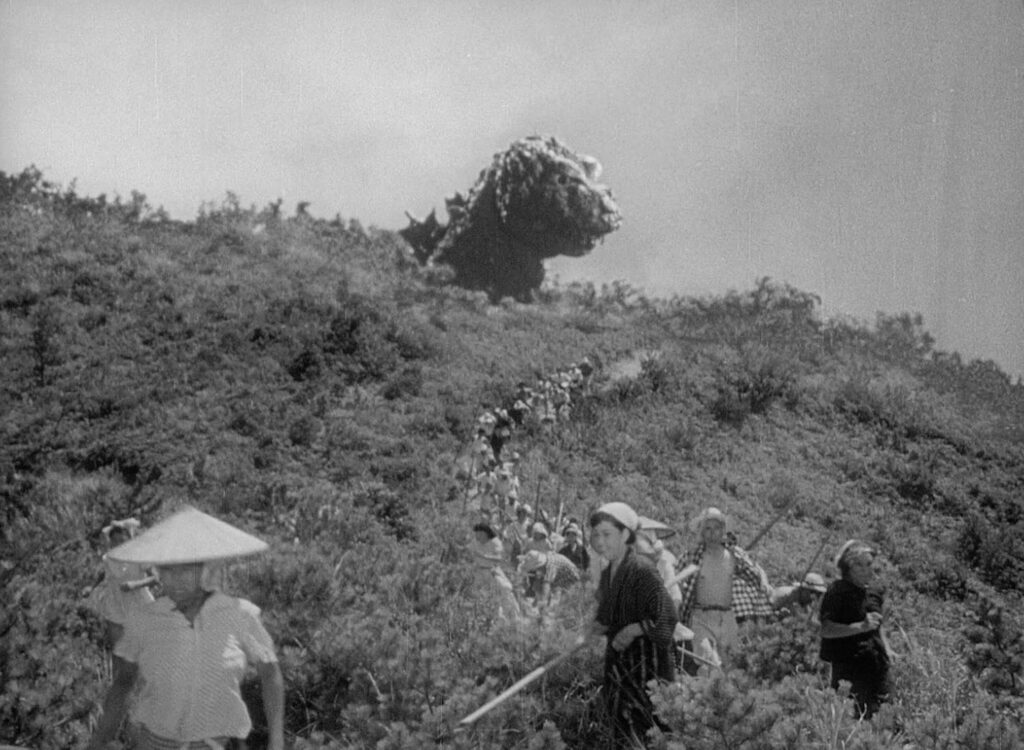 Similar to how the basics of Godzilla’s origin story and its place as the birth point of the kaiju genre are well known, I doubt it would be a surprise to many to state that Godzilla as a creature was an allegory to the dropping of the atomic bomb on Hiroshima and Nagasaki, and the harrowing, devastating effects of nuclear fallout. The shadow of the nuclear testing incident also holds influence over the film, which cradles Godzilla into a metaphor for the destructive potential of nuclear weapons, with the havoc he unleashes representing the devastation of lives stemming from a single event. Godzilla is an anti-war vehicle and a warning, not just a monster.

The film is less interested in what Godzilla looks like and keeping him on screen as much as possible, as impressive as he is whenever he appears thanks to the pioneering miniature scale effects work by Eiji Tsuburaya. Instead, it is more interested in what the creature represents. Godzilla is a threat that isn’t taken seriously, and when they attempt to counter the violence of Godzilla with more violence, it only perpetuates the suffering of the people caught in the middle. 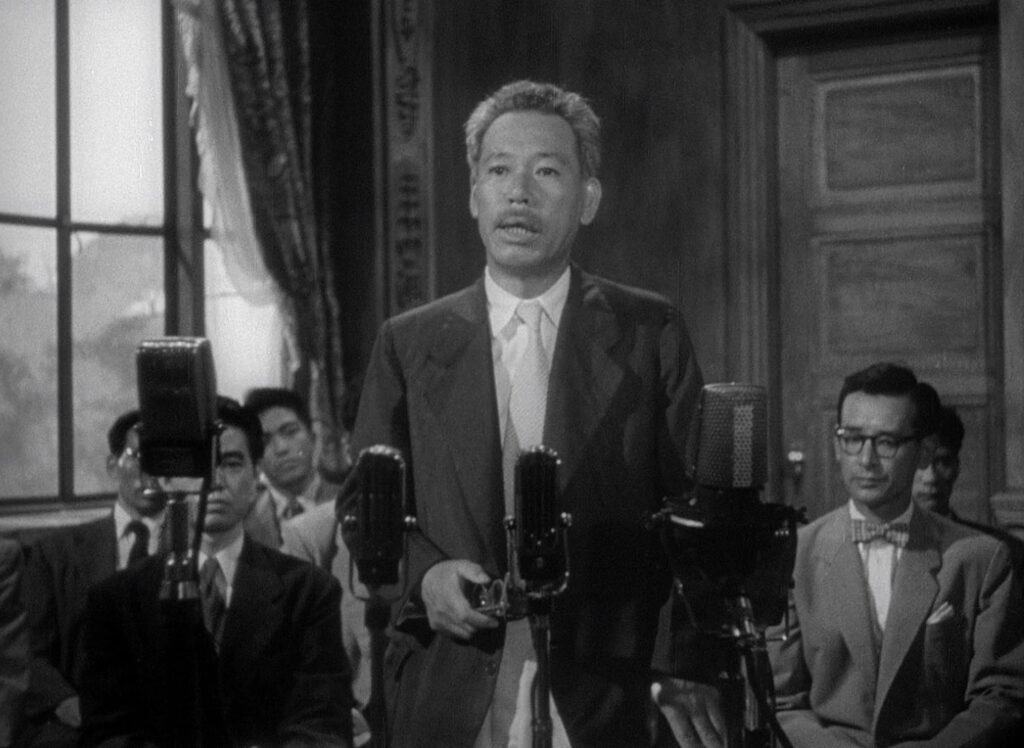 It’s sobering, but the movie is matched both in tone and scope by similar films addressing World War II and nuclear attack and survival which were released in the years following the end of the American occupation, such as Masaki Kobayashi’s The Human Condition. With censorship rules from that time preventing a societal reconciliation of the war effort and Japan’s pre-1945 militarism, and the rapidly escalating Cold War pushing Japan back onto the world stage, the country was never allowed the opportunity to assess their actions in war. The result was a collective understanding of war as an event inflicted upon the Japanese people by leadership without critical analysis of the political system that perpetuated this issue and fostered the fascism that thrived in pre-1945 Japan.

While Japanese citizens did bear the brunt of the catastrophe and human cost of the war through airstrikes and nuclear attacks, a lack of discussion on the structural causes of fascism and war in Japan until after the end of US occupation in the early 1950s resulted in much of Japanese media discussion on the war centering on the home front and civilian tragedy. Japanese culpability was rarely considered, since the issue had seemingly already been addressed and blamed solely on individuals in power through the Tokyo Trials.

Godzilla uses the monster movie genre to create a monster beyond human comprehension in size and scale to represent nuclear devastation, before using the events surrounding the creature to comment both on nuclear war and the systems that brought the bomb into existence, placing blame on both sides of the conflict.

This places the film less in the realm of King Kong and more in line with films like the 1952 Japan Teachers Union (JTU)-commissioned film Children of Hiroshima and their later independently produced JTU docudrama simply titled Hiroshima, released in 1953. The latter film more closely resembles Godzilla in how it criticizes both sides for their roles in the war which led to the dropping of the bomb, although Hiroshima is far more graphic in depicting radiation poisoning and the consequences of atomic attacks.

Godzilla succeeds by placing criticism of military might and human sacrifice as the ultimate solution at the heart of the film, with the typically schlocky monster movie genre being transformed into a more serious, considered film that expands the scope of what the genre was capable of at the time.

It’s one thing to impress audiences into a cinema with strong visual effects and large-scale storytelling in the realm which Godzilla readily possesses, but it’s another to create a film with such a deep social impact that it touches the core of public consciousness to leap into stratospheric success. This is Godzilla’s greatest achievement: creating a film that resonated with the Japanese people. 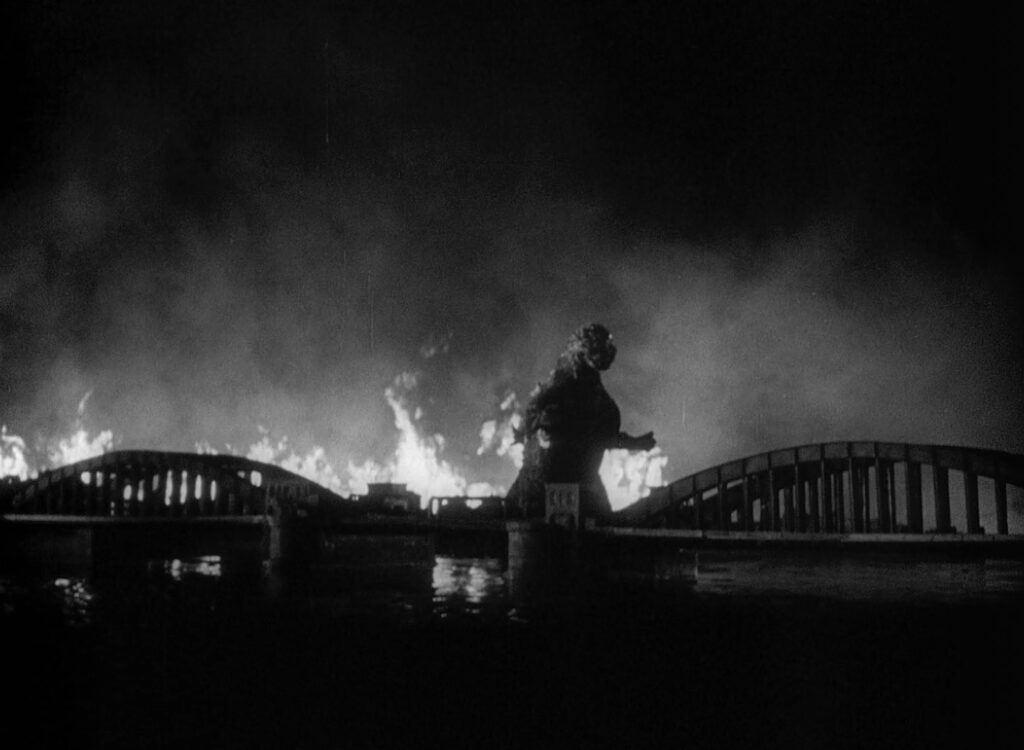 The kaiju genre was born from Godzilla’s phenomenal success. Over 12 million tickets were sold for the first film in Japanese cinemas, as it more than earned back its initial budget after impressing audiences with its story and effects. Even as monster films existed before this film’s release, it was Godzilla that set a template, if not a tone, for the countless giant monster films that followed, both from Toho Studios attempting to recapture the success of Godzilla, and from other studios attempting to capitalize on the popularity with attempts of their own.

Of course, they were going to make a sequel. The question is, what role does Godzilla and the kaiju genre they founded with this film have when removed from post-war cinematic discussion?

This is Part 1 of a five-part discussion on the history of Kaiju.

The History of Kaiju Part 4: Tokusatsu, Kaiju and The Birth of An Icon: Ultraman