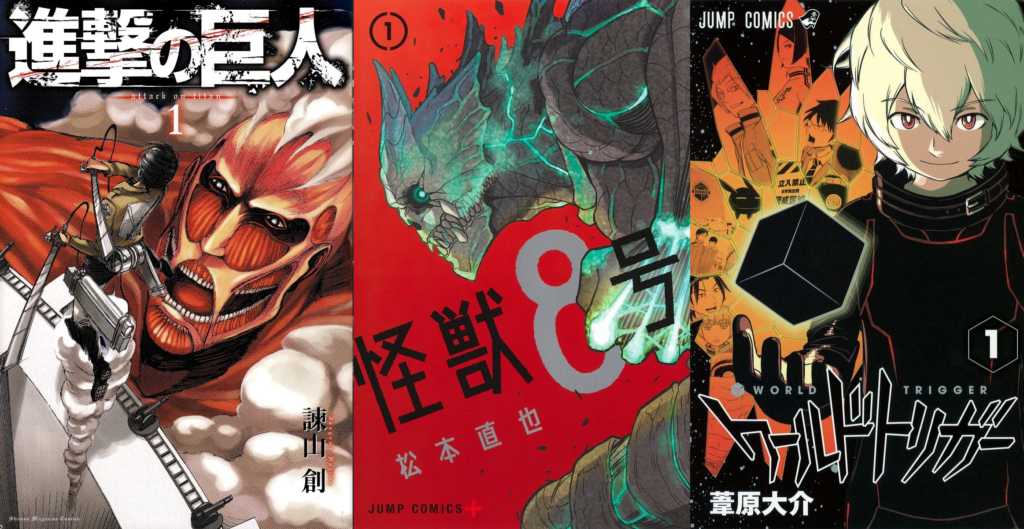 Right from the very beginning, Naoya Matsumoto’s Kaiju No. 8 was a huge success. The first chapter went viral, breaking all of Jump Plus’s previous page view records. The first volume sold gangbusters, ending up as one of the highest-selling debut volumes of last year. And now, the series has managed to achieve three million copies in circulation: our previous article on the 2.5 million milestone was out of date within weeks.

All that serves to illustrate just how popular Kaiju No. 8 is, but we have to ask: why? Certainly, it has something to do with being available for free on the Jump Plus website for the most part, but that popularity has also carried over to the paid collected volume releases. How about this: Kaiju No. 8 feels like the secret lovechild of two very popular series.

World Trigger by Daisuke Ashihara and Attack on Titan by Hajime Isayama are given in the title of this article. That’s not just a simple ploy to get clicks: there are so many ways in which Naoya Matsumoto’s manga mirrors those two properties, whether it be in terms of story, setting, or characters.

That being said, the point of this article is not to belittle Kaiju No. 8 nor those who enjoy it. Rather, by pointing out the similarities, it’s possible to demonstrate one of the things that makes shonen manga so interesting: its iterative nature, drawing influence from itself just as much as it does from the society that surrounds it.

It’s best to start off with World Trigger because both it and Kaiju No. 8 are serialized in publications under the Jump umbrella: Jump SQ and Jump Plus respectively. With this in mind, it’s not hard to see why Kaiju No. 8 would borrow so much from World Trigger when it comes to its setting. There aren’t many degrees of separation.

Very early on, Kaiju No. 8 pivots from the initial premise of Kafka working as part of a kaiju clean-up team to joining the Defense Force. To a certain extent, this is foreshadowed from the very beginning with Kafka’s promise to Mina that they’d ‘wipe out the kaiju together,’ but no matter. The point is that it sends Kafka into an organization very reminiscent of World Trigger’s Border, complete with the aim of defending humanity from mysterious invaders.

The comparison isn’t just skin deep, either. Parts of the Raid on Tachikawa Base arc, in particular, resemble parts of the Large-Scale Invasion arc in World Trigger in an almost uncanny fashion: while the latter sees the characters mostly fighting outside in the city, there is one part where a Neighbor attempts to break into Border Headquarters. This is very reminiscent of the entire concept behind the Raid on Tachikawa Base arc, albeit without the part in the city outside. Kaiju No. 8 went straight to the good stuff!

Finally, there are certain similarities between World Trigger’s power system and that of Kaiju No. 8. Nowadays, Daisuke Ashihara seems more preoccupied with team battles that almost play like esports, but all of this is mediated through the use of Triggers. A special variant of these tools exists in the form of Black Triggers, which are created when a user with high Trion levels pours their life and energy into an object. Does this sound familiar to the ‘Identified Kaiju Weapons’ or Numbers that Kafka has come into contact with in the series’ latest arc? Certainly, they are similarly rare and based on the life force of special beings: except, in this case, kaiju.

Attack on Titan and the Struggle of the Transforming Protagonist

Moving on to Attack on Titan, there are a couple of things that separate it from Kaiju No. 8. First of all, it was published by Kodansha and serialized in Bessatsu Shonen Magazine: that probably gave Naoya Matsumoto less license to borrow from it, although it wouldn’t be too much of an assumption to suggest that he had been at least influenced by it. Hajime Isayama’s series arguably defined the past decade, after all.

There’s a clear comparison to be drawn between the protagonists of Kaiju No. 8 and Attack on Titan. Much like Eren, Kafka is a normal human saddled with the burden of being able to transform into a kaiju, albeit not in such a traumatic fashion. The differences in the back stories between Eren and Kafka probably mean that the latter won’t turn into a psychopathic madman later on, although there’s still plenty of time to go.

In any case, many of the situations in Kaiju No. 8 are also reminiscent of those in Attack on Titan. Again, much like Eren, Kafka must hide his true form as a kaiju: humanity automatically designates all of them as enemies. What’s more, the very reason behind Kafka being turned into a kaiju will no doubt be instrumental as the series goes on, in much the same way as ‘The Basement’ and Grisha’s motivations were in Attack on Titan.

Finally, the current arc in Kaiju No. 8 is very similar to the Eve of the Counterattack arc in Attack on Titan: this is mainly because Kafka, like Eren, is being interrogated by the military higher-ups to see whether he could be bane or a boon to humanity. Arguably, the only difference here is that Naoya Matsumoto’s version is more action-packed, but even this pushes it closer to World Trigger’s Black Trigger Capture arc in the sense that Isao Shinomiya is trading blows directly with Kafka. Either way, there is a comparison to be made.

Kaiju No. 8: Inspired or Inevitable? 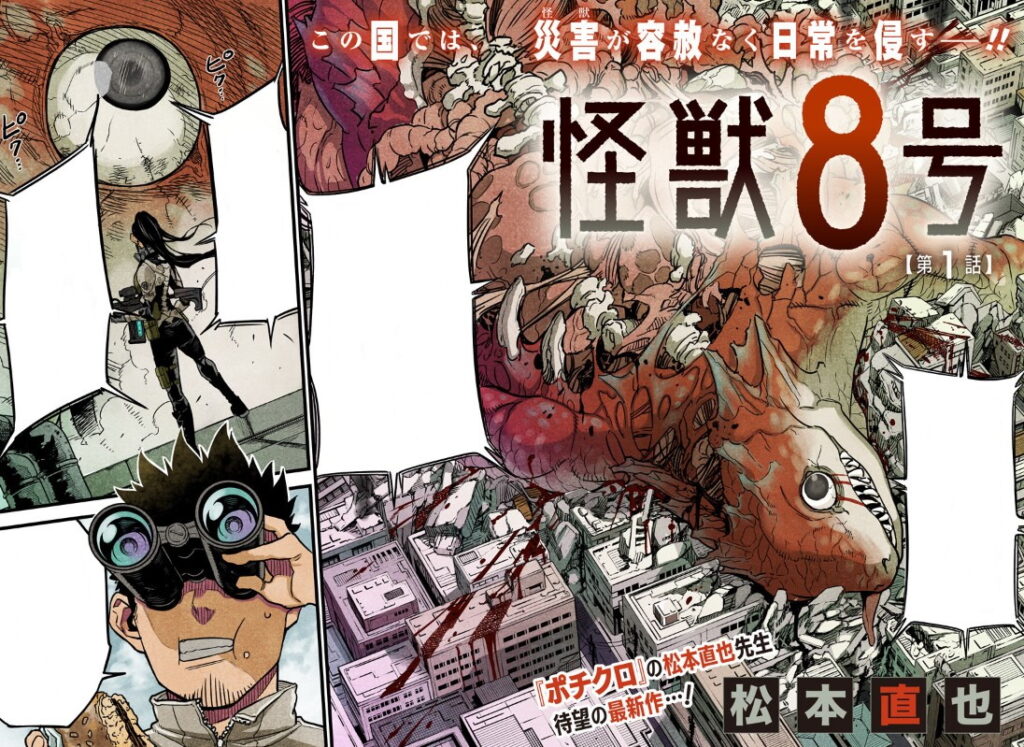 By now, it is clear that Kaiju No. 8 resembles the two properties given in the title in multiple ways. Whether it be the organization of the Kaiju Defense Corps and the setting that it entails, the concept behind Kafka and the way in which he mirrors Eren, or even the similar situations in Attack on Titan and the technology in World Trigger that the series seemingly apes, the list goes on.

Even so, this is not exactly unusual. Read any number of ongoing series and you will quickly find that so many of them are similar to each other, whether it be Jujutsu Kaisen’s homages to Hunter x Hunter or Café Terrace of the Goddesses’ conscious aping of The Quintessential Quintuplets. What gives?

In many ways, this is conditioned by the format in which manga is published. Unlike graphic novels or even regular books, these stories are serialized in magazines or on websites and must abide by a regular schedule. As a result, authors must produce exciting content that pleases the audience in a consistent manner. The solution? Give them what they want.

Not all series are like this, nor is this particularly a bad thing. If you know what you like, then who can blame you for sticking to your comfort zone? And even when series have lots of original ideas, they can be delivered in a haphazard fashion. Undead Unluck is a great example.

To conclude, Kaiju No. 8 is a series that is as much influenced by the world of shonen manga as it is an inevitable product of it. In another world and in another medium, perhaps Naoya Matsumoto would have produced a different story. What we have, though, is entertaining enough.

You can Kaiju No. 8 for free on VIZ Media’s Shonen Jump and Manga Plus.