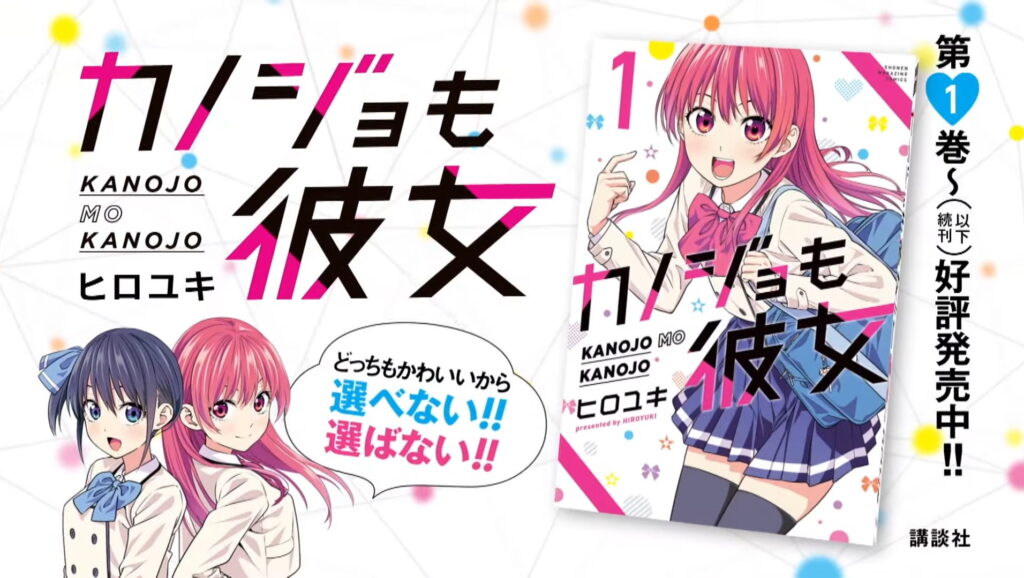 Kanojo mo Kanojo has been threatening for a while to break through to the mainstream. Alongside The Cuckoo’s Fiancee, Hiroyuki’s Weekly Shonen Magazine series was mentioned by the publication’s editor-in-chief, Kurita Horitoshi, as one that he expects to see big success in the future. One crossover campaign later and considering the explosive popularity of Shangri-La Frontier, that has yet to happen, but perhaps an animated Kanojo mo Kanojo PV might do the trick.

Featuring the eminently popular voice actors Ayana Taketatsu and Ayane Sakura, the two PVs have currently amassed close to 100,000 views – the difference between the two being that the roles swap around, with Taketatsu voicing Saki in the first one and Sakura in the second. This perfectly captures the essence of the Kanojo mo Kanojo manga, as well as bringing on some serious seiyuu talent for the animated PV.

Ayana Taketatsu is, of course, renowned for voicing such characters as Kirino Kousaka in OreImo and Azusa Nakano in K-On!, while Sakura is known for her work as Ran Mitake in BanG Dream! and Ochako Uraraka in My Hero Academia. Both of them have sizable fanbases, and their dual nature in this Kanojo mo Kanojo PV is very fitting: Hiroyuki’s series is all about two-timing, as the protagonist Naoya attempts to date both of the main characters at the same time.

Those familiar with the love comedy genre will probably point out that this idea isn’t exactly a new one, but Hiroyuki takes it to the absolute extreme. Everything from the name of the main female protagonist (Saki Saki) is designed to evoke the idea of multitude, and the series moves at a frenetic pace in a similar manner to the two PVs. Those familiar with the author’s previous work, Aho-Girl, will know the sort of surreal comedy that he is capable of.

If these animated PVs have convinced you to pick up Kanojo mo Kanojo, then you can do so via Magazine Pocket (Japanese only). The official Twitter account is also running a competition whereby users can win an illustration board by Hiroyuki and signed by both voice actors, so don’t hesitate to check the official website for more information.