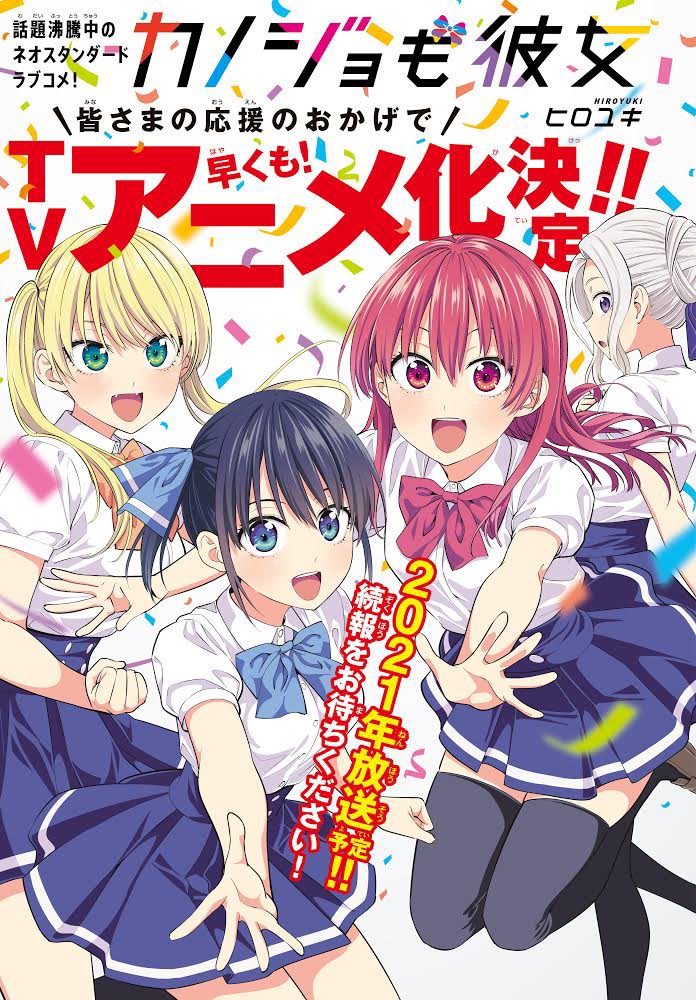 The romantic comedy manga Kanojo mo Kanojo will get an anime series in 2021. Manga artist Hiroyuki announced it on Twitter at midnight on Tuesday (Japan time).

The manga, which began in March 2020, has been a rising star for Weekly Shonen Magazine. The magazine’s editor-in-chief Kurita Hirotoshi highlighted it in an interview in July, and it had a collaboration with The Cuckoo’s Fiancee in August. In October, it got an animated PV featuring voice actresses Ayana Taketatsu and Ayane Sakura.

What Is Kanojo mo Kanojo About?

The manga tells the story of Naoya, a high school student who ends up with two girlfriends.

Naoya has had a crush on Saki Saki since grade school, and who finally agrees to go out with him in high school.

Soon afterward, another girl confesses to him.  (It’s one of those rooftop confession scenes that you see a lot in anime and manga.)  He openly admits to her that he’s already dating somebody else. But he can’t bring himself to reject her completely. Somehow, this girl, Nagisa, accepts his suggestion that he can date both girls at the same time.

Right from the start, you can tell that this series is going to be very cute, funny, and horribly awkward.

Later, a third potential girlfriend shows up.  This is Rika “Mirika” Hoshizaki, the blonde girl in the above picture.

The first chapters of the manga are available for free at Weekly Shonen Magazine’s website.

Prior to Kanojo mo Kanojo, Hiroyuki created the weird, funny, and surreal Aho Girl, which was also made into an anime series.

So far, we don’t know much about the new series.  There’s no guarantee that either Taketatsu (Azusa in K-On!) or Sakura (Ochako Uraraka in My Hero Academia; Cocoa in Is The Order A Rabbit?) will be involved with the production.