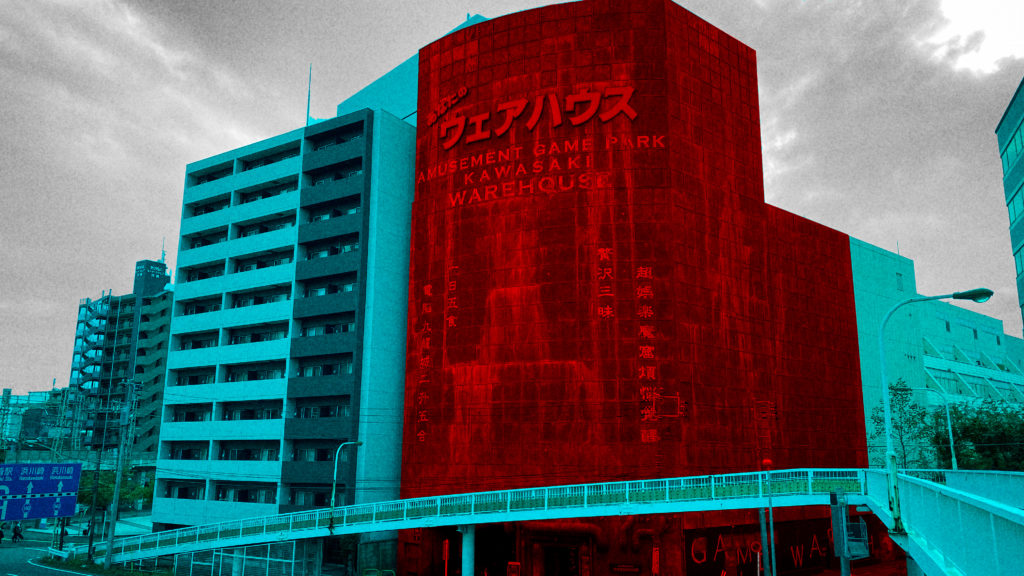 Kawasaki Warehouse is closing its doors on November 17th as announced rather quietly this morning. This news came as a complete shock to me when I woke up as the arcade has been among the best known in all of Japan since its opening in 2005. Gamers all over the world know the location by the name “Anata no Warehouse”, given to the location due to the giant lighted sign on the facade of the building, although it’s just one of many arcades in the Warehouse chain. This particular location rose to fame due to its insane interior theming, made to look like Kowloon Walled City with absolutely no detail spared.

While the theme of the arcade is what caused it to gain international attention, for arcade junkies like myself it’s the collection of games that really matter. That’s where the real heartbreaking moment for me came into play when I heard about the impending closure. Kawasaki Warehouse has one of the best selections of new and old games split up between the 2 floors of amusement machinery. Fans of all genres will find something to play there with some serious blasts from the pasts sprinkled throughout. Most impressively, it stands as one of the only known locations to still have a functional original Street Fighter machine with the 2 button pressure-sensitive control panel from the initial release. As cool as that is, it’s also just the tip of the iceberg as their collection houses a massive array of shmups, fighters, racing games, rhythm games and more.

The arcade industry as a whole has been suffering worldwide with many chains maintaining a strategy of keeping only the newest and brightest titles on their floors anymore. New games come and go super quickly based on initial earnings, and older titles just don’t make enough to justify the real estate in most modern locations. That’s why seeing a spot like Kawasaki Warehouse go away is such a massive blow, there are only a handful of locations anywhere near Tokyo that really has a spread of the classics for aficionados looking to play older games on original hardware. Unfortunately as well, with the recent tax increase in Japan even more arcades are struggling to keep things going as there is no convenient way to increase the cost of games to offset the higher taxes being paid by operators.

While that is a major issue plaguing the arcade industry as of late, a report on twitter after the announcement earlier today seems to indicate that it isn’t the issue in this case. Twitter user Nisenen states that the reason for the closure is due to a contract dispute with the owner of the building that Warehouse is located in, although the report is based on information they received from a 3rd party associated with the arcade and not from an official statement of any sort.

The only statement given by Warehouse in regards to the closing was found on a sign near the entrance & exit of the arcade, in fact, it’s so inconspicuous that several people I talked to at the arcade today when I stopped by didn’t even know that they were closing. The posted sign reads: 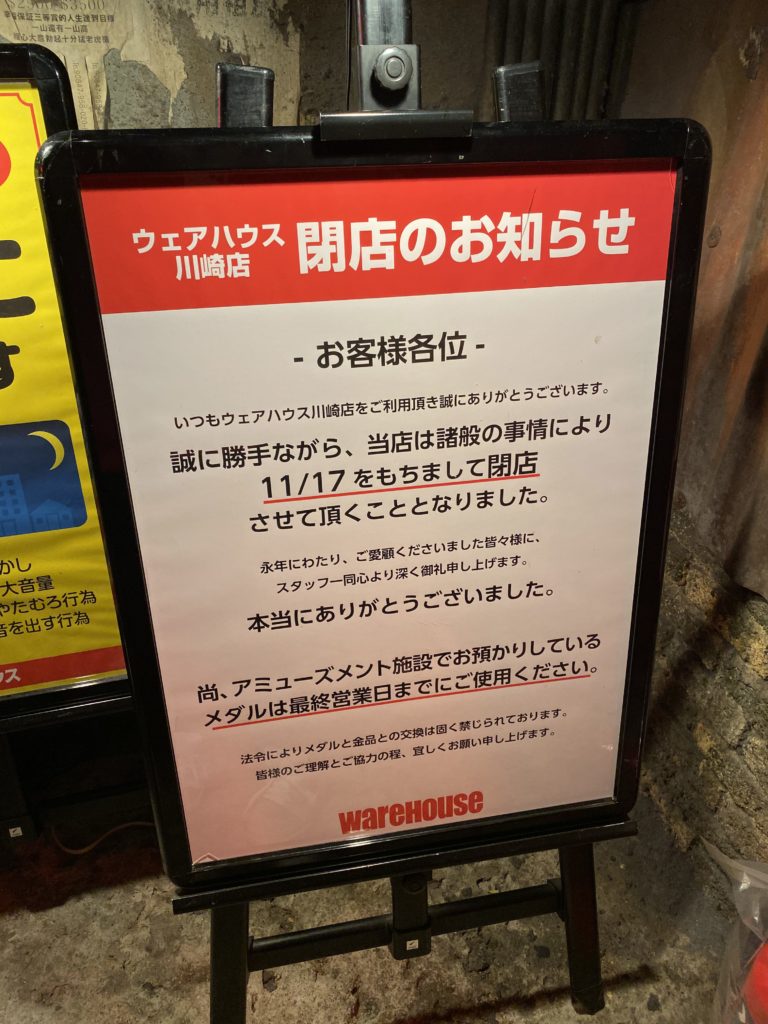 Due to various reasons, this store will be closing on 11/17.

For everyone who has shown us love over the years, the staff thanks you from the bottom of their hearts.

Really, thank you very much.

Please use your remaining medals before the last day of amusement operation.

By law, exchange of medals and gold items are strictly forbidden. We thank you for your understanding and cooperation. Thank you very much.

It’s really not the way you would expect an announcement from such a globally recognized location to go down. The news spread really quickly after the sign was initially posted to twitter though, becoming a #1 trending topic in the hours after the revelation.

Kawasaki Warehouse is not a location that I can say I patronized on anything resembling a regular basis, but as someone who has a deep love for arcades and the culture surrounding it, I have always recognized it as one of the coolest and possibly even most important locations still in operation globally. When I heard the news I made it a point to take time out of my day and trek over there from Shibuya just to make sure I could visit at least one last time before closing. It’s really a shame to see it going out like this and I can only hope that they have a relocation announcement up their sleeves after the closure of this particular location. Even without the theming, it would be the kind of place worth preserving for the history and selection contained within. All I can really say in the meantime is thanks Kawasaki Warehouse for all of the fun and wonder you’ve provided these past 14 years, you’re definitely going to be missed.